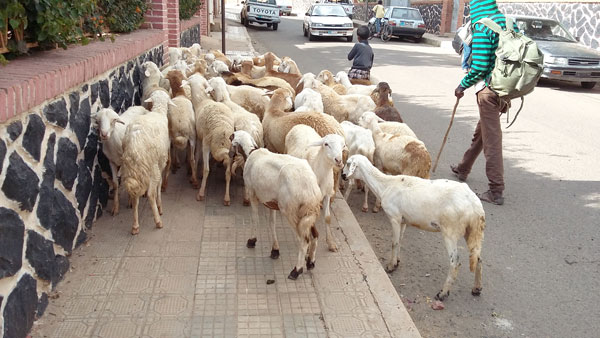 God knows how many have been dumbfounded as to why we get to celebrate two New Years: one in September and another with the rest of the world in January. I know I was when I was younger!

Over the years I have come across many foreigners who demanded explanations.

The common explanation goes that Eritreans, who officially stick to the Gregorian calendar (GC), also resorted (usually the elders) to the Julian calendar for traditional and religious holidays and that because of the latter the year begins in the month of September.

According to the Julian calendar, the year that starts in September, is divided into 12 months of 30 days each and a 13th month, known as Pagumien, of 5 days and 6 during leap years.

The Geez New Year is commonly known as Kudus Yohannes, in honor of John the Baptist.

Celebrating the Geez New Year traces its origins to the early settlers in the area. Reasons for celebrating this new beginning in September is said to have biblical implications: in the Old Testament, it is believed that the new season after the great floods begun with the month of September.

Similarly in the Eritrean context, especially in the rural areas, September is also the beginning of a sunny weather in which crops are gathered and harvested, after toiling all summer. It’s also during this month that flowers blossom after heavy rains. Therefore, this new beginning is jovially celebrated. During such time, most of the pastoralists that had left with their livestock return home at the beginning of this month.

In the old times, it was the time when young boys acknowledged their adulthood because being chosen to leave for the meadows proves a boy’s maturity; that also gave the young men the opportunity to look for a bride and the women to present their beauty.

The days leading up to the big event, young girls go out in the streets with their little drums singing laudatory songs to passersby who in return give them some money. Call that fundraising at the traditional level. Particularly in the rural Eritrea, the girls, with the money collected, supposedly buy decorations to make themselves more beautiful for the New Year.

At dusk on the eve of the day, the streets are filled with smoke (or its smell) from the burning torches, made of bundles of dry and thick wood sticks that children carry around the neighborhood chanting “Hoye Hoye.”

To that end, it is common to see people buying torches from sellers on pavements across the streets.

Growing as a child I remember looking forward to our relatives who would come from the village – honestly what we wanted most were the torches they would bring us. And then on the eve, we would get restless until it got dark so we could light our torches and run along the street.

Tradition dictates that you lay the burning torch on the ground and make people cross it three times, wishing for blessed and prosperous returns of the day. Once they cross three times, people are supposed to give the children small tips.

After we had made a round in our block and make as many people as we could find cross our torches we would make our way back home, where the family gathers in the compound. My

grandmother, who loved to stick to tradition, would then pick one of the torches and go around every room and, shall we say fumigate them, reciting some verses that supposedly wish for prosperity with the coming the New Year:

The wish, in simple words, would sound something like:

“Be gone, dishes of vegetable
Welcome porridge of butter…”

As silly as they may sound, the verses are simply good wishes of wealth and abundance for the New Year.

When she was done with touring all rooms in the house, we would all gather around a small bonfire made from what remains of the torches. Our grandmother would then sing traditional New Year folksongs. And boy, that was a lot of fun!

Such traditions make up an important part of the rich Eritrean cultural heritage. Even today, as I listen to the songs on the radio or television, my mind goes back to those smoke-filled evenings that we, as children, would eagerly await.

While it’s not customary to exchange greeting cards during this holiday, nowadays, owing to globalization, well-wishing text messages are common among the urban sophisticated.

The Geez New Year is generally considered as a fresh beginning and remains to this date the most important of the Eritrean traditional holidays.

With the approach of this holiday, or any other traditional holiday for that matter, a common scenario is the hassle people have to go through while trying to procure themselves with an animal to slaughter for the holiday.

Owing to biblical traditions, Christians need to have fresh animal blood poured as a sacrifice to God. Thus a sheep, a goat or at least a hen is essentially a part of the celebration.
How many of you have seen a guy riding a bike while carrying a goat or a sheep on its back? That’s one hilarious sight which has for long awed tourists and passersby.

Taking an animal home is one thing; buying it is completely another matter. Apparently, it takes a long and somewhat surprisingly funny conversation to make a deal. People usually check an animal before purchasing to ensure it provides enough meat. There is no fixed price for the animals; hence the bargaining is tough.

“How much is this goat?” a buyer asks.

“No, that’s too much…” says the buyer and starts to go away but is quickly held back by the seller, who shouts the common “tell us your price then.”

The buyers, usually the ones who have an experience in such matters, shoot back with almost half of the said price, in this case 3,000 Nakfa; those less inexperienced offer only a slightly less price than 6,000. Amazingly enough, many eventually go home with a fine animal and at a much cheaper price as well. But, it does take a lot of skill to identify a good animal and its real worth.

There is also a special Eritrean custom where a group of people buy a cow or an ox, slaughter it and share the flesh. Referred to as guzzi (fraction), it is an Eritrean tradition that shows the cohesion or cooperative nature of the society against individualism.

Its concept is: as it may not be affordable for one family to buy and a whole cow, a feasible way would be to form a group, buy a cow and share it so that everybody can happily celebrate the holiday.

Early at dawn on the holiday, fathers (or hired hands) then slaughter the sheep or goat. Most people prefer a sheep to a goat but some argue a goat is much cheaper and has much more meat. But then meat will always be meat!