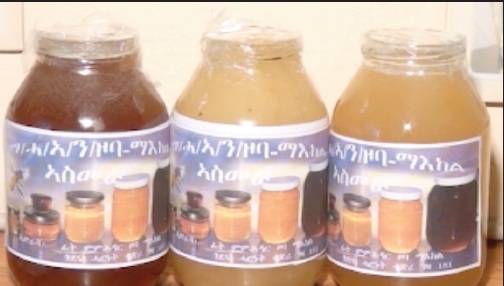 I just turned on EriTv and I saw this ad for honey, and a funny one at that, where a family is seen eating and drinking honey. This humorous advert by a local cooperative for honey production got all my attention.

Here, in Eritrea, we are less aware of the importance and process of honey production although this golden liquid is a popular food item with many health properties used as far back as during Ancient Egypt.

Honey is also linguistically used within the context of love; in English, when someone calls you honey is usually a sign of affection. Similarly in the Tigrigna language, maarey meaning my honey is especially used by mothers, and often by lovers, to show one’s affection.
The word honey is also used when talking about wealth. Within the Eritrean culture, honey and butter are synonyms of abundance and success. Hence, this golden liquid remains an ingredient, which can barely be afforded by ordinary citizens. However, its access may change over time and the implementation of this cooperative of farmers producing honey could counter the idea that honey is only accessible to the richer population.

Apart from using the word maar or honey in English to show my affection to someone, I do love eating honey and using it for a healthy skin. And, of course, I had to write to share an article on this topic. While I am interested in the process of honey production, more importantly I would like to look at it from the development perspective: what are the benefits of this cooperative and why honey should not be underestimated not just in economical terms but also environmental and health impacts.
After seeing this ad, I went to the shop located on Independence Avenue (right in front of the Municipality building) where I was welcomed by Mr. Eyob Kenfe, member of the cooperative of farmers and beekeepers. I learned about the structure of this cooperative and its advantages for local farmers. In fact, the cooperative, which has been up and running for the last 12 years, is based in Asmara and operates throughout the country. Most of the honey is mainly produced within the Gash Barka region. Honey comes also from the Northern Red Sea region, Kebessa, Anseba and Zoba Debub.

The initial plan was made by the Ministry of Agriculture and its partners, the Administration of Zoba Maakel, International Fund for Agricultural Development (IFAD) among others, to implement a system in organizing, financially sup¬porting and monitoring the work of the bee farmers. The Ministry of Agriculture implemented this cooperative not only in honey production but also for other products such as dairy food, vegetables and meat. According to Mr. Eyob, the honey cooperative remains the most organized one and is able to stand on its own feet. It comprises of 120 members in which 80 are actively working.
Actually, this cooperative has its own memorandum in which rights, conditions and obligations of members are well explained. What I like about this structure is the relationship between farmers and customers. During the whole process from honey production to delivery, there are no third parties involved. This in turn enables, firstly, to sell honey of quality, secondly, to keep a healthy producer-client relationship and thirdly, to keep the price at fair levels. The latter is important to remember, as there is a minority of honey producers who are not members of the cooperative selling honey for double the price without necessarily having a clear monitoring and quality testing procedures.

In addition, the existence of this cooperative creates a platform to sell their honey without having to go from door to door. As a matter of fact, the idea of having a cooperative on honey production was initially implemented in order to diversify their income-generating activity. As the Eritrean society depends heavily on its agricultural or farming sector; beekeepers that are also farmers have multiple sectors to look after where time management is precious. Further, during hard time, when the rainy season is not as promising, farmers can rely on other income-generating activities.

Moreover, cooperative means that all members work equally for one common interest. So what does it mean for farmers? Well, farmers are given the same access to the market and training. One farmer will bring his/her products, which will pass by the honey tester to pre¬serve a high quality and will, then, be paid at the end of the month. The actual price of honey is 400 Nakfa for 1kg. Farmers are paid 350 Nakfa for each kilo. You can see that the cooperative gets 50 Nakfa from which 20 goes to taxes. So my obvious next question was: how does this cooperative survive?

Mr. Eyob explained to me that the Ministry of Agriculture along with the Administration of Zoba Maakel, is giving financial support in terms of facilities, machineries and trainings. The idea, there
fore, is that the existence of honey production continues and expands over time. As a result, government bodies give encouragement and boost local farmers throughout the country to diversify their source of income. Additionally, the access to educational training permits many to learn new skills and begin to sustain themselves. Women are also given a chance to learn the job and become financially independent and contribute to the house¬hold’s income.
The access to training has also enable farmers to learn how to produce honey in more effective ways than the traditional method used for centuries. As Mr. Eyob said, “we used to have some beehives and we let the bees do their work naturally, however, now with the several trainings given by professionals from Cuba and elsewhere, twice a year; we have learned how to treat bees, be more productive while keeping a high standard of our product”.
There are current challenges in terms of finance but also the environment where wild birds for in¬stance are threatening the work in some areas. The most challenging aspect remains public awareness. Indeed, many do not necessarily understand the importance of having beekeepers for the well-being of the eco-system and people’s health. Farmers producing honey have to face this misunderstanding by people not willing to have beehives in their areas. Nonetheless, awareness campaigns to local communities could defeat this backward idea. To strengthen this, it is not just about producing honey but keeping bees alive. As in many parts of the world, bees are disappearing which, in consequence, have heavy impacts on the natural eco-system. In Eritrea we have a long way to go; nonetheless, we have to think of future generations.
To give a brief explanation, honeybees are pollinators by transferring grains of pollen from one plant to another, to fertilize the ovaries of flowers and many crops on Eritrean soil depends on the use of these natural pollinators as the plants subsequently provide seeds or fruits (such as mango, beles).

This sweet golden liquid has also many health benefits as I said earlier. For centuries, honey has been used against bladder infections, arthritis, cholesterol, heart-related disease, and toothaches. It also prevents cancer. Honey is also a natural method to fight against symptoms of fatigue, colds, and skin problems, to boost the immune system, against stomachaches or indigestion and hearing loss. In¬deed, by replacing your sugar in¬take into your tea by a spoon of honey would already be an initial improvement.

The idea of expanding the work of cooperatives has multiple positive effects in terms of economic development by giving access to the market to the smaller farmer while sharing the idea of common interest under this association. Expanding this type of company in a country during its nation-building process could, thus, be a great instrument of development while keeping a collective interest among workers.

As we are now in September, the time when flowers blossom, bees are working hard to make the best honey available until November (although you can find honey all year round). So, dear readers, I ad¬vice you to rush and get one of the three types of honey available at the cooperative’s outlet store. You can thank me later!

ENTREPRENEURS The engine of economic growth and innovation