The Historic Perimeter Of Asmara And Its Modernist Architecture 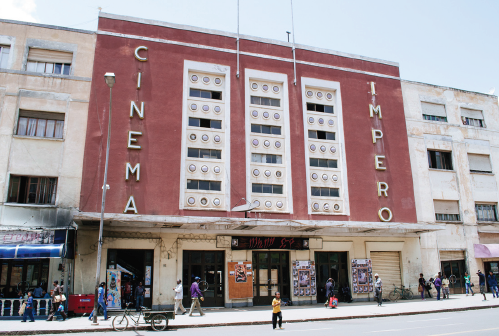 Asmara is the site of an ancient highland village called ‘Arbate Asmara’.

In 1885, the Italians invaded Eritrea and by 1900 Asmara had become the capital city. The site was chosen for its salubrious highland climate, reliable water supply and ideal geographic location in the centre of Eritrea.

In the early twentieth century, Asmara represented little more than a tiny highland village which grew incrementally to become a well-established town by the 1920s. However, by the 1930s, it was clear that Italy, under the rule of Mussolini, was intent on invading neighbouring Ethiopia and would use Eritrea as the launch pad for this long-held ambition.
In preparation for this substantial military escapade, an unprecedented quantity of materials and labour flowed into Eritrea throughout the 1930s. In a matter of months, Asmara became a vast building site, as over 70,000 Italians arrived to established new lives for themselves.

and sophisticated city at that time overlapped with equally momentous events in the world of design and architecture, which involved the global proliferation of Modernism and its various forms, including Futurism, Rationalism, Novecento, and Art Deco.
The spirit of this new age of travel and adventure was embodied in these new architectural forms. Asmara was an ideal blank canvas on which Italian architects could practice and realise these modern ideals.

From 1935-1941, thousands of buildings were constructed in the city, most of which reflect various Modernist styles and some of which represent inimitable architectural forms, such as petrol stations mimicking airplanes and boats, commercial buildings designed as trains, cavernous cinemas with fine period plasterwork and Art Dem interiors, fine ultra-modern hotels and offices, and government buildings with highly politicized monumental designs.

In 1941, Italian rule in Eritrea ended when Allied Forces liberated Eritrea in the first victory against fascism in the Second World War. No major construction has taken place in Asmara since the 1940s, because Eritrea has been subject to continuous unrest due to its struggle for independence, which it won in 1991. Ironically, this turbulence has served to protect Asmara’s unique urban heritage.

The Government of Eritrea established the Cultural Assets Rehabilitation Project (CARP) in 1999 to preserve and promote the unique architectural heritage of Asmara.
The project will restore several key buildings in the city, including cinemas, a theatre and the central Post Office. Other work includes the establishment of a Historic Perimeter and a series of Planning and Conservation Guidelines to assist local residents and the Municipality of Asmara in ensuring that the architecture and the unique urban environment are conserved in concurrence with the city’s necessary development.