ERI-TEL: Working up to the promises of the Information Technology 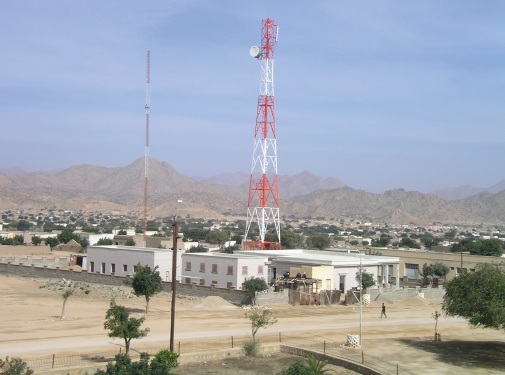 The Eritrean Telecommunication Corporation (Eri-Tel) is a share company that has been providing communication services throughout Eritrea since independence, at a price and standard that could be rated fairly well. So far, Eri-Tel’s main focus has been on providing telephone and internet services.

Eri-Tel provides two types of telephone services, fixed and mobile. If we look in to the operations of the corporation, we find that it has been employing tools and techniques that meet not only the needs of the Eritrean customer, but also the standards of a modern communications system.

The fixed communication services the company provides include voice call phones, public pay phones, fax and directory services (including international call services). The wired system provides data and internet services aided by the ADSL system, while the fixed phone service is provided via both a wireless and wired system.

Eri-Tel has developed the entire necessary infrastructure to run its system and operations efficiently. According to information given to Hadas Ertra by two engineers in charge of the fixed and mo¬bile communication services of Eri-Tel, the company has put one “exchange,” a system needed to run fixed phone services, in all the major cities of Eritrea, except Asmara and Massawa, which each have two (in accordance to their demand).

The second, supporting feature of the fixed phone service is the CDMA, which is locally called 08 (after the entry numbers of the service). To facilitate this service, Eri-Tel has built forty stations across the country.
Although the majority of these stations are located in and around Asmara, the capital city, the ser¬vice is also provided in all the big cities including remote areas as in the Assab – Asmara line, Asmara – Keren, Asmara –Barentu and Barentu Tesseney.

The Eritrean Telecommunication system is also equipped with two extension satellite stations that are used to communicate with the international community. One of the fundamental issues in run¬ning any communications system is that of a constant supply of energy and power. The corporation has been striving to optimize its supply by focusing on independent sources, rather than the public grid.

Hence, it has always had stand-by generators in all the towns and cities (to be used during power outages). In the remote stations however, Eri-Tel has relied on solar energy and coolers, which are generally more reliable and friendly sources.

Notably, mobile phone services were introduced in Eritrea in 2005. Early on, these services relied on the same infrastructure used to operate the fixed phone service. However, mobile services now are equipped with the latest and most sophisticated tools and equipment, as well as an increasing number of stations located across the country.

Engineer Tekle Weldeslasie, director of the company’s mobile phone services, has pointed out how this department of the corporation has two switches operating simultaneously.
To maintain the efficiency of these switches and to provide 24- hour, nonstop service, the corporation utilizes a commercial power supply, a standby generator, and a backup battery.
The corporation also utilizes highly sophisticated technological equipment, such as a highly efficient large microwave pipe, a super-link PDH microwave link, and a SDH microwave link. The PDH microwave relays signals from the central station in Asmara to the 115 stations throughout the country.

According to information obtained from the senior management of the corporation, the guiding principle behind the company’s determination to build stations all around the country is based upon its motto that “it is not the public that should reach out to us but the other way round.” While this seems to encapsulate the natural pursuit of profit by a business or corporation, closer inspection reveals that it should be understood differently.

Erecting towers on top of the treacherous peaks of Eritrea’s rough topography is a simple or attractive task, even by a hungry investor. Furthermore, recall that as a share company, Eri-Tel’s decisions are influenced, if not guided by, by the diversity of its constituency. Eri-Tel seems to embody the Eritrean government’s social justice program as part of its principles, not because it distributes its service altruistically but because it prioritizes equitable access and distribution.

For example, consider the corporation’s decision to switch to wireless fixed phones (CDMA) from wired ones. According to the company, this was done for two reasons: to reach the most remote regions of the country and to ensure affordability.

Compared to the wired phone service, the wireless phones are cheaper and easier to install. It is nearly impossible to efficiently and effectively distribute wires in highly crowded urban areas, whereas wireless fixed phones can be easily and quickly be distributed.
However, the public have yet to be convinced to utilize this efficient and cost-effective system. One reason is that, being used to the wired fixed system for an extended period, the public will require time to adjust to the changes. But more importantly, the CDMA wireless phones can’t operate without a constant supply of power. With frequent power outages, it is difficult to persuade customers to use this option regardless of how “good” it may be. Even with various challenges, Eri-Tel remains committed to making this system the only fixed system in operation in the future.

Importantly, this represents just one of several new changes planned by Eri-Tel. In the future, the company plans to introduce IP platform technology in its telephone services and to replace the aging dial-up system with ADSL in its Internet providing arm.

As well, the company plans to allow the purchase of services by expatriates and citizens who do not permanently residing in the country. This change will allow anyone on a short visit to the country to obtain services, rather than borrowing a phone from friends or relatives
Eri-Tel’s has endeavored to provide customers throughout Eritrea with high-quality services and products. What it has accomplished in a relatively short period of time is commendable.

However, moving forward, the company will be faced with a range of growing demands and increased challenges. Eri-Tel’s proven record of excellence suggests that it is fully capable of matching, and even exceeding, expectations.