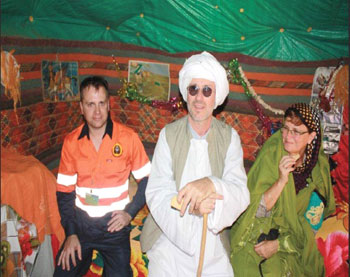 On mining in Eritrea…

The Government of Eritrea has undertaken a well-thought out methodological process of regulatory governance to ensure that extractive resource development is done in a way that maximizes local benefits while minimizing externalities.
It is using the mining sector as a mechanism to further develop the country and to create real incomes in order to address issues of poverty and migration. We have operated in the country for 18 years and have found it conducive to running an international business. We have found the country very similar to Canada in respect to its welcoming nature, cleanliness, safety and the strong work ethic of the local population.

The Government of Eritrea wants to build an internationally competitive mining environment based on national laws and evolving international standards and best practices.
They want to attract responsible companies to operate in the country. Part of this approach includes independent HRIAs which enable the mining company to get an honest assessment of how things are progressing and what steps can be undertaken to enhance workers’ rights.
The findings have been shared openly with all stakeholders and we are actively requesting input from anyone on whether the re¬port’s findings and recommendations are on the mark and what can be done differently or better in this respect. We have organized various venues to allow stakeholders to meet with us face to face to discuss this HRIA process and next steps.

Nevsun engaged extensively with stakeholders around the world and the most consistent message was that they wanted to see this HRIA process extended. This was meant to see if the various recommendations were in fact being implemented a year after the fact.
The idea was to get an independent verification on the facts on the ground by a reputable international expert rather than relying on the mining company to issue its perception on progress. It is also meant to illustrate that there is transparency and leading edge corporate social responsibility governance in Eritrea’s mining sector.

Accessibility has been a milestone of the HRIA process in allowing an independent human rights lawyer unfettered access to the Bisha Mine, the nearby communities and the supply chain companies and workers. Both Nevsun and ENAMCO have stressed the vital importance to allow Mr. Lipsett to have complete autonomy in his work.

What was your reaction to the recently released UN’s Commission of Inquiry on Eritrea report? Have you tried approaching them to set the record straight on red flags raised?

Nevsun attempted to contact the UN COI Commissioners on several occasions. We provided them copies of our corporate social responsibility annual report (that outlines issues pertaining to human rights) as well as the first independent human rights impact assessment of the Bisha Mine that includes the nearby communities.
We offered to meet with them and to engage in the process but never heard back from them during their 6 month assessment period.
We listened to their oral testimony in Geneva in March 2015 and nothing was mentioned with respect to the Bisha Mine. Therefore it was of great surprise and disappointment in early June 2015 that they decided to include several pages of “evidence” against the Bisha Mine despite never allowing the company to comment on these specific allegations.

It also must be mentioned that the UN COI never visited the Bisha Mine or even Eritrea for that matter. We believe it is completely irresponsible for a reputable international organizational body to undertake a seemingly slanderous campaign against a private company by deliberately excluding it from comment or feedback.

We finally heard from the UN COI Chair in late June explaining the ‘rationale’ for company exclusion from their methodological process while somehow justifying inclusion on the unsubstantiated allegations against the company in their report.

To date, well over 180 interviews have been conducted by an independent human rights lawyer inside Eritrea which one would think would be significant and worthy of consideration amongst the UN COI Commissioners.

This is especially true given the UN COI frequently complains that they cannot get access into the country. If such exclusions of relevant information can be made with respect to the Bisha Mine, one can only assume other selective and arguably biased methodological approaches were applied in a similar manner to other aspects of this report.

The reality is that other nation states and organizations have or will be making misinformed policy choices negatively affecting Eritrea and Eritreans.
They will be doing this reflective of a questionable report that discriminately seeks to limit balanced information from within Eritrea. It is most ethical to take an approach of inclusion of all stakeholders inside and outside Eritrea in order to disseminate enough well-balanced information to enable other countries and organizations to make more informed, optimal decisions with respect to their policy choices.
It is believed that several individuals are deliberately using hurtful misinformation campaigns as a mechanism for their own political or financial self-interests and are strategically targeting the mining sector.

The sad irony is that those that champion ‘human rights’ or are the collectors of these ‘allegations’ are more preoccupied with deliberate attempts of economic sabotage that would negatively impact the human rights of all Eritreans.

What would you say is the most striking contrast between what is reported in the media and your on-the-ground experience in Eritrea?

I have visited Eritrea 12 times over the past three years since commencing work with Nevsun Resources. The most powerful observation one can make when visiting Eritrea is the power of the dominant prevailing narrative on the country.

ERI-TEL: Working up to the promises of the Information Technology