Eritrea and the UN to expand cooperation 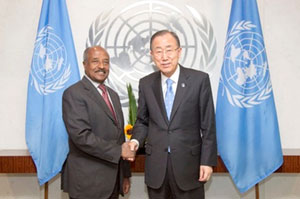 In this meeting both parties held extensive discussions on international and regional peace and security, migration and human trafficking and other relevant issues of mutual concern.

Minister Osman elaborated Eritrea’s perspective on the issue of regional and international peace and security and reiterated the commitment of the Eritrean government to work with the UN and other concerned countries in addressing the threat of global terrorism and extremism.

Minister Osman emphasized the importance and relevance of lifting the unjust sanctions against Eritrea and Ethiopia’s withdrawal from Eritrean sovereign territories, including the town of Badme. This would contribute to the enhancement of regional peace and security.

Recognizing the progress that is being registered through the partnership between Eritrea and the United Nations, Minister Osman expressed to the Secretary General Eritrea’s commitment to further consolidate and expand this constructive partnership.

On his part, the UN Secretary General, Mr. Ban Ki-moon, applauded Eritrea’s constructive engagement and role in the region. He also stated that he is encouraged and satisfied by the level of cooperation and partnership between the UN and Eritrea. He assured Minister Osman of his personal and the UN’s commitment to further strengthen the partnership.