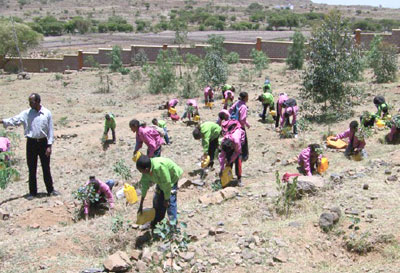 Statistical data show that over the past century 30% of Eritrea was forested. That percentage has now been reduced to only 1%. The alarming forest reduction and deforestation has been reportedly caused by a combination of population growth and the growing need of arable land, poor condition of resource use practices, the armed struggle for independence, and the destructive practices of colonial exploiters.

The problem of desertification has been global problem but many countries especially the developed countries have managed to alleviate the problem through different projects. And to date four billion hectares of land worldwide is covered with forest. That covers 30% of the world’s land. 65% of global forest coverage is found in very few countries namely Russian Federation, Brazil, Canada, the USA, China, Australia, the Democratic Republic of Congo, Peru and Indonesia. The combined forest coverage of these countries is estimated to be 2.6 billion hectares of land.

However, all the vegetations in the country have been endangered of extinction due to human and natural causes. The highland part of the country has been witnessing high population growth for decades. And as such with the growing need of arable land, coupled with the need of fire wood for household use, the forests and trees in this part of the country have constantly been under threat. Trees cut for fire wood and for building traditional houses have never been replaced and as such the areas that there were once rich in tree population were left barren.

In the western lowlands, especially along the river banks of major rivers like Gash, Anseba, and Barka rivers, the big trees are cut to put in place vegetable and fruit farms. The constant cutting of the big trees leaves the areas exposed to major erosions and with that the loss of fertile soils.

Since independence major reforestation initiatives have been taken by the Eritrean

government. The initiatives include the Summer Students’ Campaign, the Reserves’Army popular campaigns and others that have been taken by city dwellers and village residents. With these different campaigns hundreds of thousands of tree seedlings have been planted.
The result, however, was not as expected. The reason has been mainly the lack of people’s awareness. As a result many of the tree seedlings have been consumed by animals or dried out due to lack of watering or due to lack of proper follow up on their safety.

As an alternative and for a different approach the Ministry of Agriculture together with partners has taken the initiative of establishing green clubs. The initiative began in schools and so far 247 green clubs have been formed in different schools throughout the country.
The members of the green clubs consist of voluntary students well aware on the need of preserving the environment and planting trees. Each member of the green club is expected to plant his/her own tree in their school compound and at places they choose and are responsible to make regular follow up on their safety.

The members are also expected to contribute their part in raising the awareness of the public on the importance of vegetations in the daily life of citizens. The activity report of the Ministry of Agriculture indicates that up to 2014 the forest coverage in the Central region only was 28,482 hectares. The commendable activity has been conducted through the green clubs and through other initiatives mainly by members of the Reserves Army and residents of different administrative areas.

The religious institutions have also taken their initiative to take part in the greening campaigns. According to the report so far 4920 tree seedlings have been planted at different places of worship.

The establishment of green clubs is a noble initiative. In many countries, even in those that are known for their vast forests, the progress has been mainly registered through establishing green clubs. One of these countries is China, which is renowned for its effective use of green clubs in environmental protection and reforestation programs.
Some of the key programs that China is undertaking with school green clubs are reforestation, nursery programs, herbs and spice garden projects, clean up waterways, water conservation and educational outreach projects. The members of the green clubs are also responsible for creating greater awareness on environmental issues and events in the students and community.

Dedicated green clubs and outstanding individual members are provided special awards including scholarships and with that the motivation becomes stronger and stronger.
Hence, while establishing green clubs is commendable there are other initiatives that have to be taken in line with their establishment. Conducting regular follow ups and rewarding outstanding performers is one activity that needs serious consideration.