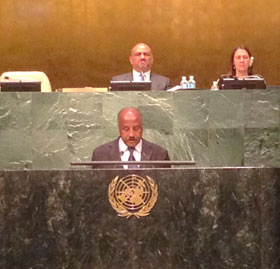 Address by H.E. Mr. Osman Saleh Minister of Foreign Affairs  during The United Nations Summit for the Adoption of the Post-2015 Development Agenda

Address by H.E. Mr. Osman Saleh
Minister of Foreign Affairs
during The United Nations Summit for the Adoption
of the Post-2015 Development Agenda
26 September 2015, New York

The Government of the State of Eritrea welcomes the outcome document titled “Transforming Our World: The 2030 Agenda for Sustainable Development”, and is pleased to join the community of nations in adopting it. Its goals and targets bode well with Eritrea’s Self Reliance Policy and Development Agenda. It clearly reflects  Eritrea’s aspiration and commitment to eradicate poverty in all its forms and dimensions among our people.

Since Eritrea’s independence in 1991, the Government and people adopted a people-centered, inclusive, pro-poor and internally driven social, economic and political development agenda.  As a result of the political commitment of the leadership and the people’s involvement, in spite of the hostile acts of some governments, extensive disinformation campaign and imposition of unjust sanctions as well as occupation of its sovereign territory, Eritrea has been able to register commendable results in almost all of the MDGs.

Eritrea’s achievement is commended by most of the UN agencies and development partners. Eritrea has achieved MDGs 4, 5 and 6, namely, Child Mortality, Maternal Mortality, and HIV/AIDS, Malaria and other Communicable Diseases early in 2013 – ahead of the target date.

Today, Eritrea is an oasis of peace in the vulnerable Horn of Africa and Red Sea Region.
•    food security, infrastructural development, capacity building, as well asefficient and effective social services are its major activities.
•    Under the motto “education for all’, education in Eritrea is universal and free from kindergarten to tertiary level.
•    The agenda of empowerment of women is on track. Equal pay for equal job and the right to inheritance and own property is guaranteed by law. FGM is criminalized. The National Union of Eritrean Women,agrass root civil society organization with over 400,000membership, is active all over the country.
•    Concerning environment, extensive and coordinated grass root afforestation and water conservation activities are taking place.

Eritrea once again welcomes the adoption of 2030 Agenda for Sustainable Development. It will definitely consolidate Eritrea’s achievements concerning the MDGs.  The SDGs appropriately emphasize the centrality of poverty eradication. Rest assured as it has done in the MDGs, the people and Government of Eritrea are determined to achieve the goals and targets pronounced in the 2030 Agenda for Sustainable Development by integrating them in all of their development policies and programs.  Eritrea is also committed to promote investment and cooperation and engagement with its development partners.

In conclusion, Mr. President, I heard speaker after speaker emphasizing the need for bringing about a transformative change all over the world,and pledgedthat “no one will be left behind”. Let all of us respect the letter and spirit of this noble pledge. It must be also underlined that there cannot be sustainable development without peace and there cannot be peace without sustainable development.

It is therefore high time for the United Nations and all of us to shoulder our responsibility and urge those countries who don’t respect international law and their treaty obligations to do so. No nation big or small should be allowed to occupy sovereign territory of another state.

Moreover, politically motivated and unjust sanctions would definitely have a negative implication on the social and economic welfare of the people, in particular women and children.They must be immediately and unconditionally lifted. Once again no nation or people should be left behind.