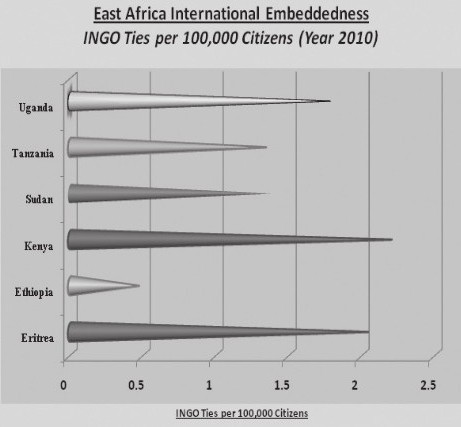 In recent years, it has become quite common to hear Eritrea, a young, low-income, developing country located within the volatile, politically-fractious Horn of Africa region, derogatorily described as isolationist, secretive, the “North Korea of Africa,” or even the “hermit kingdom.” While such statements suggest Eritrea remains detached from the global community, closer analysis reveals that they are clichéd, cursory, overly simplistic, and incorrect. In fact, one seasoned Western ambassador based in Asmara recently quipped, “those who compare Eritrea with North Korea have not been to North Korea and certainly do not know Eritrea.”

First, such descriptions lack vital context. Specifically, peaceful and cooperative regional and international co-existence and integration have long been bedrocks of Eritrean foreign policy. However, at the same time, the country has been the target of an externally-driven strategy to isolate it, particularly through attempts at scuppering foreign agreements and economic deals. For example, according to a leaked U.S. embassy cable in Addis Ababa sent by Chargé d’Affaires Vicki Huddleston (dated November 1st 2005), the strategy of the U.S.-backed Ethiopian proxy was to “isolate Eritrea and wait for it to implode economically.” Moreover, a 2009 cable sent by Chargé d’Affaires Roger Meece reveals that the “USG [U.S. government] has worked to undercut support for Eritrea.”

Additionally, claims about Eritrea’s isolation appear rather inaccurate following just a quick, perfunctory review of the country’s regional and international activities and engagements. For example, recent weeks and months have seen: Eritrea’s President, H.E. Isaias Afewerki, travel to, and the Eritrean government receive high-level delegates from, several countries toward promoting dialogue, cooperation, and bilateral ties (such as Qatar, Saudi Arabia, Norway, South Sudan, and Sudan); Eritrea’s participation and address at the 70th meeting of the United Nations General Assembly, as well as Eritrea and the United Nations (UN) announce plans to expand cooperation; the governments of Finland and Eritrea reveal the launch of an exciting bilateral development programme, which is only the latest in a growing series of significant agreements and partnerships with a range of countries or institutions, including Cuba, China, Turkey, Japan, Russia, the African Development Bank (AfDB), and the European Development Fund (EDF); and the Eritrean National Cycling Team’s participation in the UCI World Championships (Richmond, VA), following Eritrea’s highly successful performances at the All Africa Games (Brazzaville, Congo), the World Athletics Championships (Beijing, China), and the Tour de France.

While far from an exhaustive list of Eritrea’s diverse array of international activities and engagements, the examples offer a useful reflection of the country’s active regional and global presence. Furthermore, they illustrate Eritrea’s commitment to respectful, egalitarian, and mutually-beneficial partnerships with a broad range of members of the international community.

Rather than isolation as is so often alleged, data on INGO ties suggest that Eritrea is amongst the most internationally embedded countries within its region.

Another useful method to further explore mainstream claims of Eritrea’s isolation is by considering its diplomatic representation abroad. Generally, diplomacy can be understood as the process of reaching international decisions, not necessarily cooperatively, however, without the use of military power or force. Consulates are local offices that represent a state in major cities of another state, generally taking care of the myriad of issues that arise from day-to-day, while ambassadors are officials charged by their state to conduct “high-level” politics with the state to which they are posted. Within the fields of sociology, international relations, and political science, the concept of diplomatic representation abroad is frequently regarded as an important mechanism in the fostering and maintenance of friendly relations between states, and between states and other actors. Amongst other things, diplomatic representation abroad helps promote states’ socio-economic and political interests, while also encouraging understanding, coordination, and the solving of problems (Neumayer 2008).

Reflecting upon his recent visit to Eritrea, Norway’s Minister of Justice noted that descriptions of Eritrea (e.g. the “North Korea of Africa”) were highly inaccurate. This view closely parallels the preceding discussion; specifically, reviewing a sample of Eritrea’s recent international activities and engagements, as well as examining several important indicators and measures suggests that descriptions of Eritrea as isolationist, the “North Korea of Africa,” or the “hermit kingdom” are simplistic and incorrect – particularly when Eritrea’s regional neighbors are considered.

Moving forward, as Eritrea works toward improving the lives of its people, developing and fostering regional and global relations should remain a key feature of policy. However, the process is a two-way street; Ms. Bronwyn Bruton, Deputy Director of the Africa Center at the Atlantic Council, has noted the failure of isolationist policies towards Eritrea and suggested that it is “time for a new approach” by the international community. Ultimately, greater integration, cooperation, and dialogue will not only support vital socio-economic growth and general development, but also encourage peace and stability in a long troubled region.

The power of I can do