An artist who shines by the day 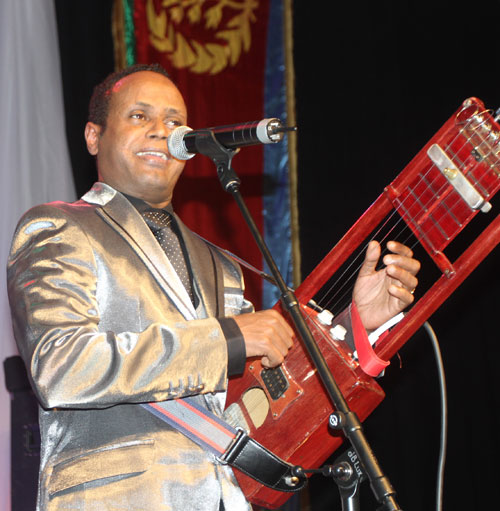 Born in 1977 in Asmara, he is one of inspirational artists the country has produced. His name is Dawit Teklsenbet but is best known by Shilan. He is our guest for today.

-How he became a singer…

When I was a little kid, whenever I heard someone playing the Kirar I remember I would stop to listen, even for hours. I mean to say that I had the taste for music since my early childhood. Then later, observing my inclination towards music, my uncle bought me a small Kirar and I started practicing with it. When my parents saw me entertaining my peers in our neighborhood with my Kirar, they were afraid I would abandon my education so they took it and broke it into pieces.

But music had already found its way deep into my heart, so there was no way that I would heed my parents. I was not interested in education, so I had to spend the daytime far from home. I moved to Aba-Shawul where I could spend practicing and developing playing the Kirar without my parents noticing. In a few years time, I became so good that people started to invite me and play for them during occasions.

It was normal for musicians playing with traditional instruments to be able to sing as well. So I was also singing alongside the music. And people liked my voice. That was how it all began and I became an artist.

In 1995, I went to Sawa as member of the 3rd round of national service. And when they started organizing a music group “Sawa National Service Music Group” I was selected as a musician and singer. I was mostly a singer because I used to, and still do, play the Kirar only when singing. I don’t play it to accompany other singers.

-How he joined the group

I was already very well known in Asmara, especially in the areas of Aba-Shawul, Edaga-Arbi and Geza-Birhanu. And those youth who already knew me back home were instrumental for me to join the music group.

The first song I produced in Sawa was “Ati Ertra Adei Shewit Lemlem.” I presented the song during the graduation ceremony, where government officials, invited guests and members of the graduating batch were present. The song got widely acclaimed by the audience and that was the beginning of my career as a musician.

-Songs he has produced so far…

I have around 60 songs in my name. Many of them are patriotic songs that I produced for the national holidays like the Independence Day and Martyrs Day. The others deal with love, nature and social life in general.

-The writer to his lyrics…

Most of my songs, apart those I produced for the national ceremonies, are written by artist Aklilu Tesfatsion. He is actually the one who introduced me to the world of music.

The melody and lyrics for all the songs in my first album, “Shilan,” which later became my nick name, were composed by Aklilu.

-Why he prefers to perform live…

Most singers in our country choose lip-syncing to playback when performing. That shouldn’t have been the case. Playing on playback does not help the development of music in our country. Quite to the contrary, it’s a harmful practice.

The reason for that is I think the lack of capacity and not becoming serious. With all due respect, sometimes I think that is very unprofessional. Any profession should be taken seriously. People engaged in any profession should invest time and energy in what they do. When we come to music, we should take time to exhaust what we produce through continued practice. Nothing is produced overnight.

The other thing I don’t like is the drum machine. That instrument is not played anywhere in the world. It is also very disturbing to the ear. Live drums add flavor to the music and that should be practiced in our music performances.

-Marketing or the lack thereof…

People say that due to our small population musicians do not get enough market. But I beg to differ. It is not the market we are lacking; it is the quality of production. Those who produce quality songs have never complained about the market. If we don’t produce songs that could satisfy the music lovers, we are definitely going to run short of demand. It is a kind of give and take. If you have nothing to give, then you won’t have anything to take.

Another thing is that art should not give priority to money. We need to produce art to satisfy our emotions as artists; and then the money will follow. It is the quality that brings money and not the other way around.

I always think of developing my profession. I have the desire to introduce something new, especially with my Kirar, in all my performances. With the Kirar I could introduce many different bits. And I want to try that by sticking to our traditional plays, and not deviating away from them.

I’m also planning to organize a big concert in connection with the coming New Year. The concert would feature live performances in front of invited guests. I hope it will inspire the youth and contribute its part in the development of our music.