‘Football is not about scoring, it is about winning’ 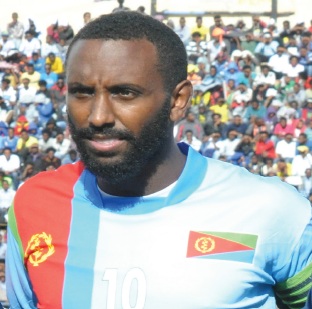 Following FIFA’s approval, Henok Goitom will make his debut in Eritrea’s national team in the 2018 FIFA World Cup Russia qualifiers. Accordingly, he will be playing alongside the Red Sea Camels against the Zebras of Botswana.
In today’s edition of Q&A, we will get to know Henok Goitom. Despite his tight schedule, Henok graciously spared us a few minutes on the eve of the first leg match between Eritrea and Botswana.
Please introduce yourself to our readers

My name is Henok Goitom. I was born and raised in Sweden. My parents are from Eritrea so they did their best to teach us the language and almost everything there is to know about Eritrea and its culture. I understand the language very well but have some small problems speaking it. We have a strong and well founded Eritrean culture at home.

What about your educational background?

I finished high school when I was 19, and then I went to Italy to play at the professional level. I started taking courses on business and marketing during my stay in Spain.

How did you get in to football?

Well, since I was a kid I spent a lot of time out in the garden playing ball. From then onwards, I started growing a real passion for football. It was actually my mom who took me to a team, and that’s how I became a football player.

And how long has it been now?

I started playing when I was nine, but went professional only when I was 19. So it has been 12 years.

I joined the Udinese Calcio in the Italian Serie A in 2004, and afterwards I entered the Spanish divisions in La Liga. I played with European teams, and at the moment I am playing with the Swedish team AIK Stockholm. I had stayed away from home, family and friends in Sweden for so long, almost ten years, so I decided to go back to Sweden. I signed a contract with AIK Fotboll in August 2012. I was lucky that the team was based in Stockholm, were I was born and raised.

I heard you come from a family that has been long involved in sports.., don’t you?

Yes I do. My father played basketball during his teenage years, same as my uncle, Niguse Habtemariam. They, and especially my uncle, took part in national tournaments (for the Ethiopian team) and won championships.

My uncle lives here in Asmara with his family, and when I went to visit him I saw how people respect him and all that. I think that when people see him, they get reminded of his days of glory days and probably summon up the pride they had in having an Eritrean compatriot as champion.

A month ago or so, we were talking with the Eritrean Commission of Sport and Culture, discussing my possibilities to join the national team. Since I never had any games with the Swedish National team, I got the approval from FIFA to represent my country and here I am a member of the Eritrean National Football team.

How did you decide to join the Eritrean National team?

time now. In fact, I did discuss the issue back in 2010. My father gave me advices, always, since I was practically a child. We came to an agreement together. It was more like a matter of honor to be able to play with the Eritrean National team.

A memory from your childhood games…

There was a youth tournament when I was 12 years old or so, and Mai-Temenay was in Sweden representing Eritrea. I had to play for my Swedish team and won on penalty. It is a great memory that I cherish very much.

Now that you are actually playing with the Red Sea camels, how do you feel?

Very proud! I think I also made my father proud. I actually didn’t know what to expect at first, because I didn’t know anything. I neither had any prior involvements with the national team. But when I got here, I felt very welcome and respected, mainly because the boys treat each other like family. I am more than happy and grateful to be part of the Red sea Camels.

Between the European teams that you’ve played with and the Eritrean national team that you are involved with at present, what are the differences and parallels to you?

First of all, I think that, Eritrea has a long history in sports but as for football, especially at the moment, it is at its early stages. So we have a long way to go before we get to be as big as the European teams. We will need time and effort.

European football teams have been there for like forever so we will most definitely need to work hard to get there. Nevertheless, I am most certain that Eritrea will make it big in all kind of sports, including football.

And with the experience I have accumulated throughout my professional career with European teams, I will share my knowledge with the team members and organizers and just see how we can use that to our advantage. Together we can always work on what and how we can build a strong team.

You know, many African teams have great talented and gifted players. Organizational bureaucracy is what they lack. That is the main problem. But of course, that can be fixed.

Where do you see yourself with Eritrean national team?

First and foremost, I want us to win the game tomorrow. Of course football is not only and exclusively about winning or losing, there is much more to it. But for starters it would be nice to score some goals.

A lot of people focus so much on the farthest future forgetting the importance of the nearest one, which is what we need the most to get there.

So for now I want to get to know my team, work hard and make sure we know our strengths and weaknesses as to be a powerful team.

And your practice with the national team?

Honestly we had a very short time, because I joined the pre-game practices and trainings only on Tuesday. The players are very good. And extremely humble. And that is something I carry with me where ever I go.

Maybe Eritrea is not the richest country of the world but it has a special and rare culture that makes our country and our people one of a kind. Wealth is not always everything, what we have is always more than anything.

About his charitable contributions

Clearly, being born and raised abroad, I was raised to be aware of my culture, my country and my people. What I do is a small, very small contribution just to feel at ease with my conscience. Even though compared to what everybody else is doing here it is practically minor, I’m just doing my part as an Eritrean.

Everything I do is through my father. Plus, I like looking after the youth’s teams and giving a hand in providing materials or equipment that they might need and things like that.

The only thing I want to say is for the people to support the national team at all times. The players are great and I respect them a lot.
In sports it’s not the skills that take you far. It is the passion. And of course, I would like to wish my team to have a great time in the playfield.