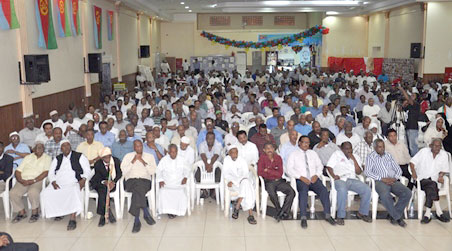 The annual three-day festival of the Eritrean Community in Jeddah city and its environs was convened on Wednesday 21st October this week.

Jeddah, 22 October 2015 – The annual three-day festival of the Eritrean Community in Jeddah city and its environs was convened on Wednesday 21st October this week.

Brig. General Abraha elaborated in detail the major development programmes underway in the country.  The building of strategic dams to lay the infrastructural foundations for long-term irrigation schemes on a considerable scale as well as intensified focus on social services projects and programmes constitute high priorities in the nation-building process, the Head of the NSA underlined.  Brig. General Abraha pointed out that the active participation of Eritreans residing abroad in a variety of ways will always boost the internal endeavours.

government priorities, especially the focus on ensuring food security, illustrated the GOE’s policy commitments to improve the quality of life for the majority of citizens.   The Ambassador also spoke on relevant investment opportunities.

The discussions that followed in the interactive seminar focused on the need to expedite land allocation; increased availability of sea freight; enhancement of efficient consular services as well as the importance of frequent public meetings in order to keep abreast with developments back home.