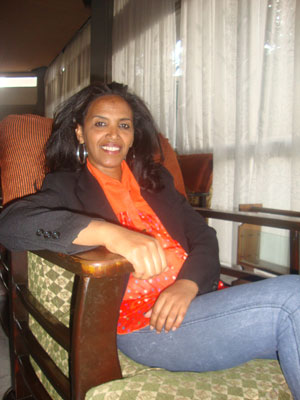 With eminent film directed in her records since 2004 until today, a very successful parade of her movie “Shikorinatat” –The Beautiful Ones– at the Cannes Film festival in 2008, a number of short dramas, several translated movies, a renowned carrier as an artistic supervisor, as a movie director, dubbing director, along with her most recent comedy feature film “Guelai”; Rahel Tewelde, at present, stands as one of the well-established and well-received female film makers of Eritrea.

-What could you tell us about yourself?

I was born in Asmara in 1975, it comes as a surprise to many, but I majored in pure sciences and dedicated my school life studying chemistry.

-So how did you end up getting into film making?

Probably since I started speaking I loved telling stories. My current profession was an internal call that has been inside me for a long time. Something like you can’t t sleep at night, so you have to wake up to write down your inner thoughts.

Unfortunately, back when I was a student there were no courses on film making or anything else of such nature, so I pursuedd my studies in sciences. Yet again, I did almost everything to keep in touch with my desire of writing and making future movies.

Until one day, in 2001 to be specific. I visited the Ministry of Health with a proposal for the finished script for my movie “Hidget” –Forgiveness–; the story was about people that had to deal with HIV and had to forgive each other and themselves to overcome the ordeal.

After a month I received a call from the authorities; they liked the story line, the scene break downs and everything that I had proposed, frankly for a beginner I did fairly good. I had handled everything professionally and that impressed them even more. That is how I got my first sponsorship and published the film in 2004; furthermore it was translated into English and Arabic, and also broadcasted on the Eritrean television.

So my debut was glorious and it inspired me to dedicate more time and energy in the profession that I love and respect.

-How did you acquire your proficiency in film making?

There are no schools in film making in Eritrea. Not just me, but almost each person within the movie making industry in the country got a hold of our skills trough self-learning.

Given that we have lots to tell, and have an immense passion for movie making and we do our best within our limitations.

Sometimes the Cultural Affairs organizes short-intensive courses by inviting professionals from abroad and there we get the opportunity in looking at how things are done from versatile prospectives. For example in 2005, there was a three months-long training, were we had tons of practical training while working on short films.

-You also engaged in some theatrical works…

Yes I did, few times. My favorite was the one about the life of late artist Teberih Tesfahuney and her importance in the Eritrean history of art. It was originally an idea of my colleague novelist Mr. Tsegebirhan Goitom and we showcased it at the opening of the 2010’s Eritrea Festival.

It gave me the opportunity to work with a wide age of professionals, from the seniors to the youngest professionals, it was an experience that I enjoyed so much and hold very dear; I am even certain that the audience enjoyed it as much.

Theatre is sacred, well, at least for me. We have a lot of technical flaws so I don’t want to go there, just not yet.

-What are your thoughts upon the Eritrean film making?

Our resources are very limited; especially in regards to our inadequacy in technical aspects puts us in rather difficult position.

Nevertheless when it comes to our story lines, the story telling methods, plotting and the quality of our stories are beyond comparison. Often, even a lot better than western movies, you know. Mainly because we are a small and new nation, Eritrean art is almost always 100% Eritrean. We tell our story, we put across messages that are functional and we are extremely good at it.

I just wish we could work, on big scale, on our technical shortcomings.

-Anything you want to say at the end?

I believe we have tons of outstandingly valuable history to narrate and so many events that can inspire us to generate great artistic works, but there is so much that is bringing us to a standstill. Government offices, the PFDJ, civil society groups, our society should be able to come together in an unitary understanding and join hands in assembling a strong, firm, incessant film industry.

-Thank you for your time.