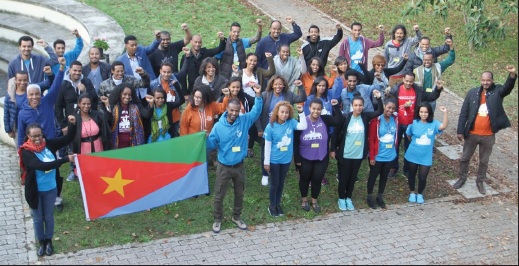 The PFDJ Youth Movement in Europe organized training of trainers program from 23 to 25 October in Bologna, Italy.

Asmara, 30 October 2015- The PFDJ Youth Movement in Europe organized training of trainers program from 23 to 25 October in Bologna, Italy.  The training programme was carried out under the theme “PFDJ Youth: Foundation of United Eritrean Resistance”.

More than 50 Eritrean youth from Switzerland, the UK, Sweden, Norway, Germany, Holland and Italy participated in the awareness raising training programme geared towards enhancing the active participation of youth in national development programs.

Mr. Fesehatsion Petros, Eritrea’s Ambassador in Italy, addressed the participants dwelling on the rich heritage of youth contribution in the past years and the potential areas for their role in the present times.

Progress report of the activities that the 11th PFDJ Youth Congress had charted out last year was discussed as part and parcel of preparations for the forthcoming 12th Congress that will be held in Italy from 24 to 28 March 2016.

Vacation turns into a work visit