Globalization and Eritrea: Some Thoughts 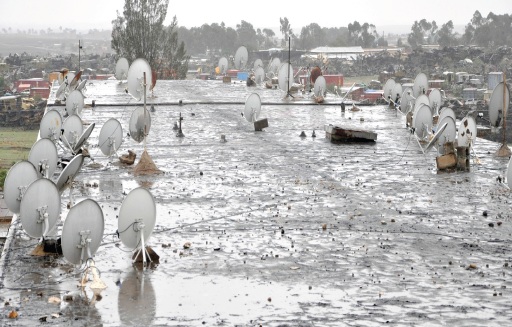 It’s late in the evening, windy and cool outside, and I am seated comfortably on the sofa in my aunt’s cozy, humble home in Asmara. Embaba (popcorn), himbasha (traditional Eritrean bread), and biscotti (cookies) are spread out on the table in front of me, while the appetizing aroma of tsibhi diffuses throughout the air. With the clock nearing the top of the hour, and having just finished flipping channels between Al-Jazeera, CNN, and BBC, I excitedly look forward to the upcoming English Premier League football match.

I am joined on the sofa by one of my cousins who is feverishly texting and playing various games on his cellular phone, while my other cousins and their friends are happily engrossed in a recent western film on their laptop in the adjoining room.

As the television program switches to a commercial with a svelte, young, attractive female encouraging viewers to purchase a “5-minute” instant weight loss product, my attention drifts to ponder the broader implications of what my immediate context signifies.
I nod my head slowly from side to side and wryly smirk as I remember the plethora of reports, repeated ad nauseum, of how this country is a global leader in censorship and media blockages.

At the same time however, nearly every single house in our neighborhood and within adjoining regions has a satellite dish, openly beaming in news programs, television shows, a variety of images, and diverse messages from around the globe.

Towards reconciling this contradiction, I recall an especially damning quote about the press and media by the iconic Black revolutionary leader Malcolm X, made during his visit to the Oxford Union in the 1960s: “the powers that be use the press to give the devil an angelic image and give the image of the devil to the one who’s really angelic…[or] they’ll take a person who is a victim of the crime and make it appear he’s the criminal, and they’ll take the criminal and make it appear that he’s the victim of the crime.”

Moving beyond the clear inaccuracies and numerous shortcomings of different global media portrayals and reports, I begin to consider the possible outcomes of increased globalization and media flows upon Eritrea’s traditional society and culture. Globalization is a complex, multidimensional, multifaceted, contested concept that defies simple definition.
It has different meanings for different groups. One general definition describes it as the set of processes by which more people become connected in more and different ways across ever greater distances.

through which the constraints of physical space lose their hold on social relations.

A simple, yet useful, example is how via cellular telephones, tablets, and an assortment of globalized social media, such as Twitter, Face book, and YouTube, those of us in Eritrea are able to maintain contact and keep in touch with our family and friends who may be located anywhere in the world. Just hours ago, my friend in Mihram Chira “liked” my Face book photo – taken at Asmara’s Cicero stadium – while my friends from Southeast Asia to the Western hemisphere and everywhere in between, left comments of appreciation.

However, another definition, much more critical, identifies globalization with the process by which capitalism expands across the globe as powerful economic actors seek profit in global markets and impose their rules everywhere. This latter, critical definition serves to challenge the process it tries to capture (Lechner and Boli 2012: 4-5).

Having been lazily reclined on the sofa, I now sit up attentively; the potential implications of globalization as delineated in this latter definition seem ominous and lead me to furrow my brow.

I ponder how, if more people are exposed to more similar sounds and images, or experience many of the same events at the same time, the result may be an unfortunate dissolving of cultural differences into a dull, colorless homogeneity. This process, variously referred to as “Americanization,” “Westernization,” or “cultural imperialism,” is often tied to the global period of decolonization after World War II.

Although colonialism was in its last death throes, in its place scholars identified a new form of subjugation of the Global South. Since direct politico-military control was no longer viewed as legitimate or becoming, global powers turned to symbolic and psychological means of control that were facilitated by the rapid interaction within and integration of the globe.
I think of home. Eritrea. How will this society, moored upon principles of collectivity, communality, unity, and sharing deal with globalization’s promotion of mass, unceasing consumption, instant gratification, self-absorption, exploitation, and profit. How will a society where the elderly have traditionally been respected, revered, and held in high-esteem deal with the global corporate media’s constant mantra of the need to avoid aging at all costs and remain “forever young”? What happens when our understanding of nihnah (“us” or “we”) comes across globalization and media’s unrelenting glorification, idolization, and cult of the individual?

I wonder how children – my cousins, their friends, the nation’s youth – raised on hours of play and running around out in the sun and the meda (field), with marbles, stones, soccer balls or rolled up socks and rags, tires, and bikes will be impacted by the turn to sedentary pastimes and increasing exposure to various media and their messages. As a socializing agent, the mass media exert great influence on society.

Through its frequent portrayal of violence, television may encourage violence or make children less sensitive to violence in real life. Past research has shown that exposure to violence occasionally incites and often desensitizes viewers to violence, and the dark, dangerous world depicted on television tends to cultivate a sense of danger, mistrust, dependence, alienation, and gloom (Gerbner et al. 1987).

I reflect upon some of the young girls in the neighborhood, and reminisce about the long, enthusiastic discussion we had about education and their future.

How will the global media’s messages impact them? The media can strengthen stereotypes and legitimate long-standing inequalities.

The media often distorts, under-represents, or mis-represents women; globally, women are often only seen as wife, mother, and housekeeper, thus reinforcing their conventionally assigned roles and limiting their professional horizons.
Or they are represented as sex objects to be used, in some cases in masochistic, perverted and pornographic depictions.

I think of my cousins in the next room watching their film. I think of the future. I think of the beauty of our culture; I shudder at the prospect that it will dissolve, disintegrate, and disappear.

Just as I finish that thought, my cousin pulls my arm and pleads for me to change the channel – there’s an Indian film starting. “Bejaka (please)!” As I warn her that it will be for only a minute – the Premier League Football match is kicking off soon! – another thought crosses my mind. Cultural imperialism and homogenization are not inevitable. Eritrean culture does not have to disappear. Instead, to borrow a phrase from global social justice activists everywhere, “another [outcome] is possible.” While globalization can and will have an influence on Eritrean society and culture, the end result can and may be “glocalization” or “indigenization.”

That is, a new particular experience, which although impacted by globalization and media flows, remains Eritrean in essence…much like the Indian film on the screen, an indigenous product of India – Bollywood – but reflecting global features. Indian films, retaining, championing, and disseminating the country’s unique culture and heritage, have become symbols of successful resistance to global cultural imperialism even while incorporating elements of globalization and commercialism.

Globalization is complex, important, contentious, and basically inevitable. It can harm. But it can also benefit. It may lead to homogeneity.

But it doesn’t have to; Eritrea’s rich, special culture, particularity, and distinctiveness will be influenced, but do not necessarily have to be lost.