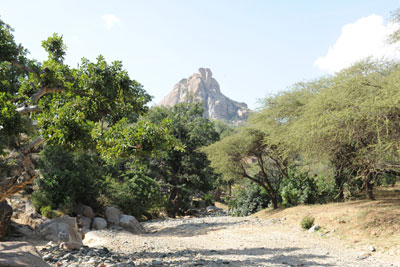 Mr. Hadgu GebreEnderias head at the planning and statics unit at the Ministry of Agriculture gives us further details.

The United Nations Convention to Combat Desertification is one of the three Rio Conventions. The concept of protecting the environment through integrated approaches of sustainable resources management and fighting against desertification, land degradation and drought was initiated in the international conference held in Stockholm, Sweden in 1987. When an international conference was held in Rio de Janiero in 1992, the need for the fight against Desertification, Land Degradation and Drought (DLDD) and the principles of Sustainable Land Management (SLM) were given due international attention and importance that the concept was up graded in to a convention. The convention has 194 member countries, in which Eritrea is a member. Eritrea signed the Convention in 1994. The Ministry of Agriculture is the focal Ministry of the Convention and the Agricultural Extension Department is the focal point. The main aim of the Convention is to work on the rehabilitation of the environment to fight against DLDD and to encourage member countries to practice sustainable land management principles.

The Convention holds international conferences of its member countries once in every two years. This year’s Conference, the 12th Session (COP 12), was held in Ankara, Turkey from 12 to 23 October 2015.

-Eritrea in the UNCCD 12th Conference of Parties (COP 12) session

Eritrea presented posters and audio-visual exhibition that reflect challenges and efforts being performed to overcome the challenges through community mobilization. Soil erosion in river banks, farmlands and mountains; deforestation for many purposes basically for firewood and traditional house making; siltation of ponds due to untreated catchments; low water table induced by lack of water conservation structures were mentioned among the main challenges. Afforestation programs in Serejeka subzone, check dam construction in Tsilma plain, Success stories of farmland treatment in Dieda; Mai Aini Subzone; Soil and water conservation activities in Nakfa Subzone as well as enclosure development in different parts of the country were among the audio-visual presentations that attracted many Turkish and international visitors.

We also successfully pulled off some side events aimed to be of an arena of sharing and exchanging experiences on various interventions being carried out, and/or planned to be carried out on regards to the fight against DLD as well as to best SLM practices.

The United Nations Environmental Program (UNEP) had arranged a side event for three countries that included Eritrea. Mr. Heruy Asghedom, Director General of Agricultural Extension Department at the Ministry of Agriculture and the head the Eritrean delegation gave a Power Point presentation of the methodology followed in preparing the Aligned National Action Program document.

The Ministry of Agriculture has a good working relationship with the UNCCD at headquarters level. It participates in various UNCCD programs by submitting community based best SLM practices and climate smart agriculture. We could mention some examples submitted to UNCCD and are available in its website, such as:

A.    Drylands Champions Program – This program is open to all member countries that want to submit best SLM practices. If the submitted documents are found reasonably well and could be replicated in other member countries, the selection committee of UNCCD publishes them in its website. So far, Eritrea has submitted the following documents.

Debona enclosure and activities undertaken in this enclosure; like its establishment, administration and management practices were presented. This enclosure is administered and managed by communities of Dembedoran and Foulina administrative villages, Sub zone of Molki, Gash Barka region. It has an area of about 12,000 ha.

B.    Land for Life Award Programme – The Ministry of Agriculture submitted detailed activities, achievements, challenges encountered and measures taken to tackle these challenges as well as the way forward of an enclosure administered and managed by a village named Adi Shumhabti, located in sub zone of Debarwa. The various interventions of the community of the village to fight against DLDD and the SLM practices undertaken were highly praised by the UNCCD selection committee. As a result, it was rated second in the world. The various integrated interventions made by the community of Adi Shumhabti are available in the UNCCD website.

-Eritrea at the World Day to Combat Desertification

June 17 is marked in all members countries as the World Day to Combat Desertification. Ministry of Agriculture in collaboration with the Ministry of Information marks the event by publishing articles related to the importance of this day in the local newspapers and a copy is sent to UNCCD headquarters.

-About the submission of biennial progress reports

All member countries are requested to submit progress reports once every two years. Eritrea has submitted progress reports for the years 2010, 2012 and 2014 which are all available in UNCCD website.

As to the preparation and submission of Aligned National Action Program (NAP) – UNCCD has prepared a ten-year strategic objective in which all member countries have to align their DLDD and SLM activities to this Plan and submit a document to UNCCD.

To facilitate some of the UNCDD related activities; mainly in the preparation of Aligned NAP document and report writing, some fund was allocated. The focal Ministry has spent this fund fully in the planned activities. This is clearly shown in UNCCD country (Eritrea) fact sheet distributed by UNCCD at the COP 12 conference.

-And the Fact Sheet…

In the COP 12 International Conference held in Ankara, Turkey, the UNCCD distributed country fact sheet. The Eritrean fact sheet shows that the country is fully committed to fulfill  the principles of the Convention as it is diligently fighting against DLDD and adheres to the principles of integrated approach to SLM through participation and involvement of farming communities and other land users. It has also developed a five year (2014-2018) Strategic and Development plan which is in line with the ten- year (2014-2018) strategic plan of the UNCCD.

The fact sheet compares each member country regionally as well as globally. It is a great achievement for Eritrea. The fact sheet is a result of many years intervention in the areas of environmental rehabilitation activities to fight against DLDD and SLM practices.