Rehabilitation & Recovery Tax: why the uproar? 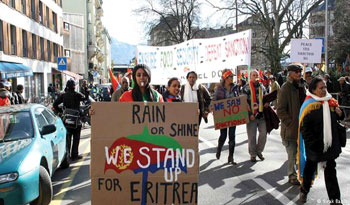 The mainstream media has, of late, latched on to this queer “fascination” – obsession may be a more appropriate term – with Eritrea. I fully understand the “agitation”.

Eritrea is a very fascinating and mysterious place if you have never been to the country or do not hang out with Eritreans in the Diaspora. But that’s the secret of its beauty, discrete but proud at the same time, like its citizens.

Well, “to call a spade a spade” mainstream media’s fascination with Eritrea does not stem, by and large, from benign curiosity. This small nation has somehow attracted the ire of some big power and a kowtowing media seems to relish Eritrea-bashing as a perversely “entertaining” pass-time. As it is, new accusations are hatched almost incessantly to denigrate every facet of its social fabric and to chisel at Eritrea’s birth right of developing as a nation in its own way and at its own pace.

The litany of bogus accusations – routinely regurgitated by the mainstream media as incontrovertible facts – is indeed mind boggling and include: “Eritrea’s airlifting of 2000 soldiers to support Al-Shebaab (over the air spaces of hostile countries and US military bases in the region!); delivering plane loads of weapons to the same at Baidowa; granting military bases to Israel and Iran; supporting the Reich Machar faction in South Sudan etc…”. On domestic issues, the venom gets more toxic and ludicrous.

In this scheme of things, what has gained currency in the past few weeks is the 2% Rehabilitation and Recovery Tax (RRT). This is on top of the layer now, especially in some countries such as Switzerland. The headlines go: “The government threatens its citizens abroad to pay taxes… Eritreans abroad are living in fear and forced to pay the 2% tax….. the government resorts to extortion to collect these taxes… the Embassy plants spies among refugees… the Diaspora tax is used to fund terrorist groups!”. The list goes on and on.
Emotive words are used to misinform the general public who would not spend time and energy to verify a denigrating portrayal of a far off country.

In Noam Chomsky’s (2012) mildly sarcastic words: “the general population doesn’t know what’s happening out there and it doesn’t even know that it doesn’t know”. The negative narrative on Eritrea thus goes on without questioning. And Diaspora tax, along with the issues of human trafficking and migration, have become convenient tools for campaigns of harassment against Eritrea or favoured domains of sloppy, cut-and-paste, journalism.
At a more abstract level, it is clear that Diaspora or migrant communities invariably maintain connections with the countries of origin through collective memory, commitment and the formation of a diasporic consciousness and identity creating associations, organization or media channels. In the case of Eritrea, the Diaspora has historically had a much more visible and participatory role in the social, political and economic life of the homeland.

This is not indeed a new phenomenon. Why then this sudden obsession by the media and some politicians at these times? Is it because the deliberate campaign to encourage and fast-track asylum granting processes to Eritreans pursued by some countries in the past years has failed to yield the expected political outcome?

just ‘disappear’ and cut ties with home. Well, the opposite actually happened. It is too naïve to imagine that an Eritrean leaving his country won’t help the latter by sending money to his relatives or not harbour the ambition of future investment ventures back home.
Financial contributions and remittances from migrants is a global trend that has increased in volume in the era of globalization.

IFADA figures in 2010 illustrate that the African Diaspora comprised more than 30 million and remittances were estimated at more than 40 billion US$ a year in those times. The huge amount of money sent back home by African migrant communities is undeniably significant and contributes to the economic development of the continent.

In the case of China, to take another example, the size of the overseas community stood at some 35 million and about half of the 45 billion US$ in FDI (2002 figures) originated from the Chinese Diaspora.

Looking back at Eritrean history, the Diaspora made huge financial, political and social contributions during the armed struggle. Eritreans living in North America, Europe and the Middle East were highly organized through different associations such as the National Union of Women, The National Union of Students, and the Workers’ Association, among others. Since the 1970s, the Eritrean Diaspora in various countries created close and structured links or transnational networks to leverage and multiply their support to the liberation struggle. The famous Bologna Forum of annual festivals was an epitome of this networking.

These networks were used to raise awareness and consciousness on the Eritrean cause, to have fundraising events and campaigns and to send material support to the liberated zones.
Thus, the commitment of the Diaspora was an important instrument of the armed struggle. In regard to remittances, in addition to material support, Eritrean communities managed to send money and most people were sending about 20% of their salary per year.

After independence, Eritreans living abroad continued to be active participants in the political, social and economic life of the homeland.
The Government of Eritrea for its part invested in bolstering the ties with the Diaspora and introduced innovative instruments – bonds, investment packages, dual citizen¬ship rights etc. – to cement further this vital bondage. The Diaspora was also involved in the referendum for Independence, with over 80,000 Eritreans voting from abroad, and other major political events; (Al-Ali et al. 2001: 583).

Diaspora communities tend to increase their commitment to the home country in difficult times. Indeed, during the 1998-2000 border war, the Eritrean Diaspora in Copenhagen fundraised $1000 per household in June 1998 (Bernal 2004).

In Riyadh, Saudi Arabia, the voluntary donation was fixed at one-month salary. In Edmonton (Canada), $26,000 were raised during one meeting and in Saint Louis (United States), in July 1998, the community donated $55,000 in only two hours (Bernal 2004:3). Diaspora donations should also be put in perspective as one-month salaries and subsequent excise taxes were also levied, through voluntary initiatives, by civil servants and private enterprise workers at home too.

The 2% RRT tax was enacted in 1994. The 2% tax applies only to full time workers; i.e. to people who are employed and have definitive income (not those living under welfare or supplementary benefits of one form or an¬other).
Those who have the ability to pay but choose not to do so forfeit certain services and privileges back home.

This normative and fairly innocuous tax system is however misconstrued and sullied by those who harbor a political agenda against the country or know little about it.
I am amazed when I hear a member of the Socialist Party in a European country talking on TV and claiming that “asylum seekers who are under social welfare are forced to pay this tax at their embassy”.

The implicit message is that money given by European countries to asylum seekers is going directly to Eritrea. First of all, a person undergoing asylum securing procedures would not have contacts with the Embassy of the “persecuting State”. Secondly, the 2% RRT tax does not apply to unemployed citizens.

The 2% RRT tax has always been small and the excessive preoccupation with it by certain political parties and media outlets is intriguing to say the least. In fact, other countries, and especially the United States, have tax systems that incorporate citizens abroad. In the case of the United States, the taxes levied are high and the punitive measures for tax evaders taken by the IRS very onerous.
Remittances are of course a different matter. Eritreans send money to their relatives or bring money with them during their holidays on a constant basis. This is not unique to Eritrea.
As mentioned earlier, the African continent boasts about US$ 120-160 billion going through informal channels (Radlicki, June 2015).

The case of the Eritrean Diaspora validates the affirmation by Kennedy (2000) that transnational migration is not just a cultural and political process but also one which acts as a central agent of economic globalization in its own right.

In the event, the media spotlight on the 2% RRT or Eritrean remittances is hard to fathom. The aim seems to instill fear among the Diaspora to impel them to cut ties with their homeland and not be a participant in Eritrea’s development efforts.

This provocation is engendering indignation and strong resistance. The Diaspora has responded massively with the slogan ‘2% is my right’.

Trying to tear up the Diaspora has thus failed and once again the culture of helping each other, commitment to and identification with their home country has not diminished in any sense.

At a time when there is a massive focus and increasing academic research on the positive role and impact of the Diaspora in the developing countries, it seems as if Eritrea has no right to do so according to some policy makers and media outlets. In other words, the sovereignty and independence of the country continues to be challenged under various ruses.