Cooperation versus isolation: where does Eritrea stand? 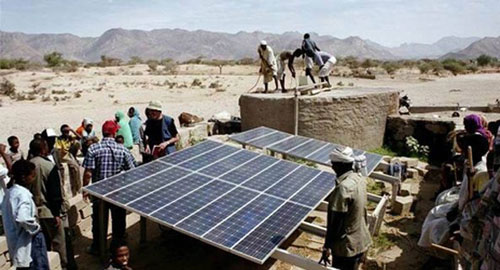 “Cordoned off, seal off, close off, fence off, out of the way, cutoff, inaccessible, hermitic, secluded, reclusive etc….” These are some of the pejorative labels that are often invoked to emphasize and drive home the conditions of ‘self -isolation’.  The question is; does Eritrea fit into this category on the basis of nuanced analysis of its international conduct or are these terms, once again, politicized labels fabricated to portray the country in a certain negative light?

In today’s issue, I will try to shed some light on the reality on the ground.   My conjecture is that those with an open mind will alter their misperception of the country and discard the fallacious narrative that has obviously gained some currency to embrace the cooperative mode that the country really subscribes to. Yes, cooperation is also termed as partnership or combined effort to instill notions and principles of symmetry.  The discourse today has in fact tilted towards partnership – discarding the old donor-recipient lexicon – as governments become increasingly cognizant of growing interdependence that will only be bolstered more with time.

In this vein, is it at all possible today, in this globalized world, to be on a reclusive mode and to develop without cooperating with others? And for Eritrea, can this small nation really afford isolation?  Can it be self-sufficient and practice wholesale autarky to consume what it produces and produce what it consumes?  How come we hear about mining companies investing if it so isolated and inaccessible; the “hermit kingdom” according to some of its detractors? This does not simply add up.

Already during the armed struggle, the EPLF was cooperating with those supporting its cause for self-determination. At independence, the focus of the government was on reconstructing the economy of a war-torn newly independent nation. New relationships were thus nurtured with countries of the region, other bilateral partners as well as multilateral agencies including the World Bank, the UN agencies and other interlocutors.

To look at the same subject through another prism, is Eritrea an outcast in terms of diplomacy? It won’t be a piece of fiction to state that Eritrea’s representation worldwide is, without a doubt, a significant portion of its diplomatic effort. To strengthen this, since independence, the country multiplied its presence throughout Europe, North America, Africa and also in Asia and Australia. In addition to its embassies and consulates, Eritrea is present at both UN headquarters in Geneva and New York, at the EU headquarters in Brussels, without falling to recall its presence at the African Union headquarters in Addis Ababa. Further, Eritrea has honorary consuls throughout the world giving additional strength to its diplomatic relations.

How about the extent of presence of foreign embassies in Eritrea?  African States and Arab Gulf states have diplomatic representations in the country. You will be surprised to know that all five permanent UN Security Council member states are also present in Eritrea.

UN agencies such as UNDP or UNICEF work hand-in-hand with the Government in terms of socio-economic development programs. One example of partnership agreement is the 2013-2016 Strategic Partnership Framework (SPF), which enhance the ongoing collaboration among the UN and the Eritrean Government in the areas of national capacity development, food security and sustainable livelihood, environmental sustainability and gender equity.

Besides, the European Commission has been operating in the country since 1995, making it one of the first foreign diplomatic missions to set shop in the country. For the past twenty years, the EU has been an important asset in socio-economic and development cooperation. Through joint agreement under the Country Strategy Paper (CSP) and the National Development Indicative Program (NDIP), the level of partnership has remained substantial from 2009 onwards. The presence of this multilateral union is significant for Eritrea as it builds a bridge, albeit indirectly, with all the 27 member states of the Union.

EU-Eritrea ties of cooperation are not confined to economic aspects only.  They also encompass programmes of capacity and institution building.  As a matter of fact, the EU supports projects such as ‘support for community courts in Eritrea’ as part of the development cooperation under the European Development Fund (EDF). Community courts constitute the first jurisdiction in Eritrea as they offer fast and cost effective adjudication forums for the settlement of disputes and litigation that do not exceed 100,000 Nakfa in value.  The progamme cited above has helped the training of  about 1200 community court judges, 370 clerks and 700 support staff; (EU Eritrea 2015:23).

The landscape of Eritrea’s external partnership framework is big and includes small but highly effective programmes of tapping into knowledge and best practice transfers.   In this category we find cooperation arrangements in health with doctors from Italy, Germany, China and Switzerland among others. Specialized heart, urinary tract, eye surgeries are routinely carried out by groups of doctors who come to the country at certain intervals each year.  The programmes usually include the introduction of modern equipment and joint work with local doctors.  In regard to education, Finland and Eritrea have agreed upon a partnership in higher education, without forgetting Turkey and Japan. The cooperation with African countries also needs to be highlighted: Kenyan teachers in tertiary education have also started working in this academic year and are joining Indian and Sudanese teachers in their endeavors.

Eritrea maintains broad bilateral ties of cooperation with China, India, Japan and the Arab Gulf States, among others.  Development cooperation is seen as a stop-gap measure while the long term thrust of Eritrea’s external ties is anchored on investment and trade.  In this regard, Eritrea maintains 40/60 shares with Bisha Mining Share Company; the Asmara Mining Share Company; as well as Zara Mining Company is a shared corporation between China (60%) and Eritrea (40%). The Colluli Mining Share company owns the colluli potash project, which is a 50/50 joint venture between Danakali Limited and the Eritrean National Mining Company (ENAMCO). In textiles and non-strategic raw material based enterprises, foreign companies run fully owned industrial enterprises.

In the event, one wonders how and why Eritrea is often portrayed as a “reclusive” State.  A cursory examination of the genesis of these terms shows that they were in fact recent “inventions” (circa 2009) pushed by certain quarters as part and parcel of their demonization campaigns.  This is partly motivated by the desire to scare off investment and falls within the schemes of the sanctions regime and other tools of politically harassment against Eritrea.

Perhaps, Eritrea’s well-thought out vision and choice of partnership that is geared towards promotion of investment trade instead of confinement to perpetual aid is seen as stubbornness by some quarters.  But who says being stubborn is a negative attribute in this case?