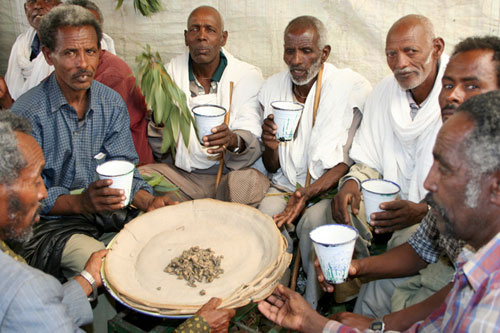 A couple of friends, I one of them, were casually chatting about … well nothing in particular but this and that. Amid the chit-chat the topic of Siwa (homemade, brewed traditional alcoholic drink) came into our discussion. Among the group, there were some Siwa lovers; and so they began describing how they like their Siwa to the smallest details. Basically, there are two kinds of Siwa, Gu’esh and Xiray.

In general, though, the making of Siwa, from the baking of Meteqa (kind of thinly baked bread, especially prepared for Siwa) to the final filtering procedure, is a long process that takes weeks of preparation. Particularly owing to the process of their brewing, however, the two kinds of Siwa have distinguished textures; the Xiray dregs-less watery liquid and the Guesh a bit thicker solution. After the soaking and fermentation process that takes about a week is done, Gu’esh is made by sieving using Mekuba’eti (a cone shaped traditional filter, whose narrow bottom is covered with closely woven net or mesh). Xiray is made by careful extraction of the pure watery liquid (Xiray) from the unruffled Gu’esh by leaving out dregs (Hatela). The old traditional way uses the process of precipitation to make Xiray.  But, the modern process, which is common around urban centres, these days, is done by filtering the Xiray and the Hatela using a textile sack.

Returning back to the discussion among the friends which has been referred at the entry of this article, the topic of Siwa came into the discussion and a heated one it became too. Siwa lovers in the group were describing their favourite Siwa in detail. The descriptions were not limited to the Siwa being Xiray or Gu’esh; they involved the strength colour, test, maturity etc. of the Siwa; be it Gu’esh or Xiray. Moreover, they described the situations where they would love to have Siwa, which varied from ordinary days, holidays, to different social gatherings. Some even went further in particularizing how they would love their Siwa in Melelik, a metal container, once modern when it replaced the traditional Wancha (a container made of cattle horn,) glasses or modern plastic cups.

However, the discussion took a dramatic turn to become a heated argument when one of the men said, “A good wife is one who knows how to make a good Siwa.” One of the girls replayed, “I don’t know how to make Siwa. And I don’t want to learn how. It’s just too much trouble and I don’t want to struggle with smock and fire in making Meteka. But I don’t think that makes me less of a woman.” The disagreement went on; men arguing that women should know how to make Siwa and women responding that they are not obliged to meet such chauvinist demand in the modern world. The debate got me thinking. I could understand where the girls’ argument was coming from. However, the issue goes beyond the inability and/or unwillingness of a few women to learn the traditional skill of making Siwa. For, if these women don’t know how to make Siwa, they won’t be able to pass of the skill to their children and so it would go on to the next generations. Where would that lead us to? From then on, I got drifted from the discussions into other thoughts of my own. I began reflecting on the issues of ‘modern world’ and ‘modernity’. I thought about what those ideas mean to us as Eritreans, as the youth. And in the so called ‘transformation’ whose responsibility it would be to preserve our precious traditions, such as making Siwa.

Modernism, as an idea, particularly refers to or is related to, the present or recent times. In general, it includes the aspirations and actions of those who think the existing traditional practices have become ill-fitted to their tasks and out-dated in the new economic, social, and political environment of an emerging new order in life. The traditional practices in question may include forms of art, architecture, literature, religious faith, philosophy, social organization, activities of daily life, and even the sciences. In this sense, modernism refers to the process of changing ways of the past for the better, to fit the demands of the present. However, in the post-colonial transformation of the African nations, modernism, sadly enough, has become to mean the absolute adaption of the ways of the western world; which is particularly characterized by moral relativism, autonomous individualism, narcissistic hedonism and reductive naturalism.

Well, culture is meant to be changed and modified; dynamism is the very nature of culture. However, change should not be pursued for the sake of change only. Change should mean progress; it ought to mean upward mobility; for the better too. For, when change is pursued just for the sake of it, it doesn’t only become meaningless but also, at times, detrimental. In this sense, progress oriented change becomes the selective promotion, alteration/modification or even sometimes amputation of constituents of tradition. That agreed upon, the absolute replication of western modernism would be in contradiction with progress oriented change. For the promotion, alteration/modification and exclusion of cultural traits is not selective; thus, it is irrational on the part of the repeater.

By its very definition, tradition is the inherited and complex evolution of things; be it cultural, social, conventional, and institutional. It is the transmission of beliefs, customs, knowledge, and in general the way of doing things. Preserving tradition does not mean the conservation of obsolete traits of culture. It is rather the transmission of the useful ones, the modification/updating of the slightly out dated ones and the exclusion of the irredeemably obsolete or even contemporarily injurious ones. This process, however, is not an overnight evaluation homework; it rather ought to be a prudent course of evolution that would take place over a reasonable period of time. No matter how ridiculous it may seem for any ‘modernized’ contemporaries, there were, without a doubt, reasons for the creation, cultivation and transmission of any given tradition from generation to generation. And, it is these reasons that ought to be carefully evaluated before the decision to keep, alter or discard it is made. For, any given tradition is part of the identity of the ones who practice it. The disclamation of one tradition after another without rational resolution and the assimilation of the traditions of others one after another would be nothing less than rejection of one’s own identity in an attempt to be somebody else. And, one can never be someone else no matter how hard one tries to be; however close one gets to look like the later, one only remains a copycat. For, as it is said, “Bitter will not get any sweeter just because it is kept in a beehive.”

However, the problem with progress oriented change (modernity in its real sense) is the assigning of the responsibility of this careful modification or preservation of tradition. For, it is not as though the process is a panel discussion that ends with a voting. Thus, the million Nakfa question here is “Whose responsibility is it to preserve or modify traditions?” The answer, for me, is simple; everybody’s. Let’s see the issue through example and take the issue Siwa as one. If we agree that Siwa is one of the dearest cultural heritages of ours and the tradition ought to be preserved, whose responsibility shall it be to preserve this particular tradition in the age of beer in our urban centres? Women’s? Absolutely not. Had it been, say, 30 years ago where men assume the breadwinning role and women take the house hold chores, the task allocation might have seemed impeccable. However, today, where women are playing indispensible role in the undertaking of breadwinning in a number of households, how could the responsibility of house hold tasks be unanimously assigned to them? Here I’m not suggesting that men should learn how to make Siwa and assume the responsibility or brewing it equally with women. Oh, no! I am not even going there today, since the subject of division of labour in household chores is a big issue on its own. However, the fact remains that same; some of our beloved traditions, such as Siwa are/would be in a predicament under the threat of the trend of the so called ‘modernity’. And, I think it is reasonably agreeable, for everyone, if it is said that finding solution for this predicament is everyone’s responsibility.

Cooperation versus isolation: where does Eritrea stand?