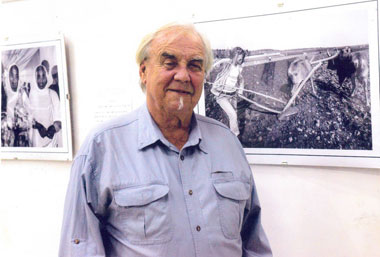 Asmara Gallery opened its gate to the public from the 21st to the 28th of November. In this photographic exhibition, 25 black and white pictures were presented by a professional photographer, Mr. Robert Papstein.

I started gazing at the rightly positioned photographs which had captions in Tigrigna, Arabic and English. I continued looking to one touching photograph taken in Agra, Sahel in 1985. As clearly depicted on the picture, a woman suffering from famine is portrayed and reminded me of the terrible impacts the war for independence had on our society.

Mr. Robert Papstein who started his career as a photo-journalist in the 1960s, had the opportunity to pass through Agra (near Sahel) in 2013, 28 years after his first time in the region.

“Now, the transformation is incredible; currently, the residents have a school, a health center and a generator for electricity, access to pure water supply and other social services. Even beyond that, I have witnessed the accessibility to cell-phone and to satellite dishes. This is what many Sub-Saharan countries are failing to develop, consequently, we witness almost daily mass displacement from rural to urban areas in the rest of the African continent”, Mr. Robert asserts.

After taking a picture of a woman driving one of the modern machines in Bisha mining company site in 2014, he expressed his certainty about the ongoing transformations by stating that: “compared to the size of the normal pickup track in-front of her, yes, from the cab of her 75 ton ore carrier, Teberh (the driver) looks like she is landing a jumbo jet. And many women commute daily on to the mining site by the provided buses from the surrounding villages. Clearly, an earnest transformation is happening right now in Eritrea.”

Amid this, my cell-phone buzzed. A text message from an interested art fan was reminding me to inquire the photographer about one of the patriotic Eritrean women fighters—Mama Zeineb Yassin– who joined the revolutionary struggle in 1977 by breaking the chains of backwardness and patriarchal domination. “My link with the EPLF dates back to the 1980s when I was in Sudan, your neighbor country. Since then, the journey was remarkable and inspiring. Having the photograph of Mama Zeineb by itself is part of the effective organizational culture the EPLF established in ‘Meida,” Mr. Robert asserts while pointing at the pictures leaning against the wall behind us.

In a feature film by the Audio Visual Institute of Eritrea, ‘Eta Ade (the Tenacious Mother),’the

main actress of the movie, Netsi Fessehatsion, applauds ‘I am strengthened to surpass the fences of injustice, to break down the walls of segregation, and, assuredly, I am ready to usher the valued essence of freedom and liberty to the lives of my citizens.’ Thus, after looking repeatedly, my attention was glued to the picture of a woman farmer named Asmeret Haile from Adi-Quala. Don in full modern attire, conveniently, it is challenging to reconcile your knowledge about the roles of women in Eritrea and of the laborious movement of Asmeret to plough her farm.

Deep understanding of such efforts has led to the establishment of the Association of Women Farmers in Eritrea, which has its central office within the premises of the Chamber of Commerce.

The association is engaged in poultry, dairy farming, rearing rabbits and horticulture among other activities. After contacting the Chairwoman of the association, she stressed the following: “we have witnessed an apparent media tool here in the gallery which judiciously reflects how the patriarchal culture has negative impacts on women.

Thus, there is still a bridge between what the EPLF has accomplished and what we are telling to the world profoundly. Mr. Robert is here as one of the masons ready to help us in abridging such information holes”.

In the gallery, once again I was recalled by an artist who has an utmost concern to witness women dam builders near Nakfa. The picture was taken in 2014, and unequivocally, it reminded me of Mr. Marcel Claxton (2015) who once wrote in his article title Women as Guarantors of Living and Life: the Anatomy of Eritrean Fighters that “having the knowledge of women who are forefront leaders of such domains like in the dentistry by 73%, in the auto-repairing with 56.4% allotment, and other listless platforms in which the women from Eritrea are marching on earnestly here in Meda, you can understand what other revolutionary struggles of the FRELIMO from Mozambique, Algeria, Angola, Cape-Verde and others have failed from achieving” (Claxton, 2015:6).

Then, at last, I asked Mr. Robert Papstein who ushered me of his collected pictures publication about his link to the Eritrean revolutionary struggle and now after independence.

“The war for independence was the war against injustice. Then the war at last brought the justice as in women case. As a photo-journalist, even since my experience working with the Civil Movement in United States of America, I am always interested in what is happening to people; the core contents of my photographic works are here to tell how really transformation is happening for Eritrean women.”

Since the groundbreaking and first step of the three women who joined the revolutionary struggle in 1967, the platform for Eritrean women has been encouraging. Accordingly, Mr. Robert Papstein presented his work at the Asmara Gallery portraying the progress and accomplishments of women within the organizational, social and cultural layers of the Eritrean society. Mr. Papstein will show his art during his inaugural ceremony in May 2016 as part of the vibrant celebration of the 25th silver jubilee of Eritrea’s Independence.

Through his lens, he managed to depict the harsh life of women during the armed struggle and the peaceful life at independence through inspiring and touching photographs of the backbones of the Eritrean society, i.e. women.