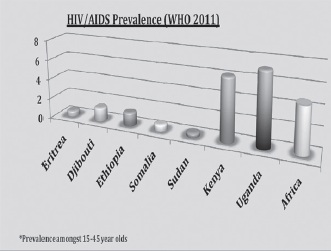 According to UNAIDS, East and Southern Africa remain the areas most heavily affected by the HIV/ AIDS epidemic, with 10 countries in the region accounting for 34% of the world’s HIV/AIDS cases. However, amidst these stark figures and though HIV/AIDS remains one of Africa’s most significant public health challenges, considerable progress has been made.

For example, prior to 2001, HIV/AIDS treatment in Africa was nearly nonexistent; yet by 2012, approximately 7.5 million Africans were receiving antiretroviral therapy (ART). As well, a 2013 UNAIDS report found that the annual number of new infections continues to decline, with especially sharp reductions in the number of children newly infected, while Africa has also become a global leader in the drive to eliminate mother to child transmission of HIV.

One African country with an especially strong, yet frequently overlooked, record battling HIV/ AIDS is Eritrea. Located within the fractious Horn of Africa, Eritrea has performed commendably within the UN Millennium Development Goal related to combating HIV/ AIDS, malaria, and other diseases. Furthermore, Eritrea’s figures are distinguished as amongst the best within the region and also comparatively across the continent (see Table 1). At the same time, the potentially devastating consequences posed by HIV/AIDS, particularly in terms of severe human toll and national developmental disaster, mean that Eritrea has little room for complacency. Rather, it must augment existing programmes and continue to promote effective initiatives and interventions in order to control and reduce the harmful impact of HIV/AIDS.

The first documented case of HIV/AIDS in Eritrea dates back to 1988, during the latter stages of the independence struggle (Muller 2005). In subsequent years, the number of infections steadily increased, progressing to such a degree that by the early new millennium, HIV/AIDS was Eritrea’s second leading cause of death among patients over five years of age. During this period, prevalence was approximately 2.0%, nearly 30,000 Eritreans were infected, and there were about 1900 new infections annually (UNAIDS 2013). Though the figures were “relatively low” in comparison to other countries in Africa, the situation was serious enough for UNAIDS to warn that Eritrea was “…[facing] a rapid expansion of the HIV/AIDS pandemic within the next few years.” However, in stark contrast to the dire projections, Eritrea currently has a prevalence rate of about 0.6% (WHO 2011), one of the lowest in Africa, and records less than 500 new infections annually (UNAIDS 2013).

An examination of Eritrea’s achievements – made in spite of a multitude of challenges – finds that they have been the result of a wide array of efforts. Notably, some of the success may relate to Eritrea’s targeting of traditional and patriarchal stereotypes and practices, many of which can serve to increase HIV/AIDS risk factors. For example, in several countries throughout the region, child or adolescent marriage is still quite common. In addition to representing a pressing child and gender rights issue, the practice is thought to increase HIV/AIDS prevalence via several mechanisms (Bruce 2007; Laga et al. 2001). Importantly, Eritrea has made child and adolescent marriage (under 18) illegal, and remained committed to enforcement, especially within rural areas. Accordingly, the outcome is that one potential risk factor for HIV/AIDS has been averted.

As well, female genital mutilation (FGM), which is a harmful traditional practice found in parts of Africa and the Middle East, was outlawed in 2007, via Proclamation 158/2007, although efforts to eradicate were in place during Eritrea’s pre-independence era. Like child marriage, not only is FGM a women’s, child, and human rights issue, it places females at a high risk for HIV/AIDS through several causal pathways (Brady 1999; UNFPA. 2013; Yount and Abraham 2007). Beyond abolishment, Eritrea has also promoted support, awareness, educational, prevention, and recovery programs in both urban and rural areas. Consequently, FGM prevalence rates have decreased, women’s and children’s rights have been better protected, and potential risk factors for HIV/AIDS have been prevented.

Last, gender equality has been a central focus in the country, potentially providing the foundation for continued positive outcomes in battling HIV/AIDS. Notably, the World Health Organization (WHO) has claimed that gender discrimination and violence render females far more vulnerable to infection (WHO 2000). Furthermore, the feminization of poverty places women at a tremendous risk for HIV/AIDS since “above all… poverty limits people’s options for protecting themselves and forces them into situations of heightened risk” (Irwin, Millen, and Fallows 2001). Through improving gender equality, a key driver of the HIV/AIDS epidemic may be controlled since women will face fewer barriers in accessing HIV prevention, treatment and care services due to limited decision-making power, lack of control over financial resources, restricted mobility, or unbalanced childcare responsibilities.

Eritrea’s efforts at improving gender equality and decreasing the burden of poverty borne by women include, inter alia: ratifying several relevant international rights instruments, including The Convention on the Elimination of All Forms of Discrimination against Women (CEDAW 1979); making gender equality a fundamental component of the National Education Policy and national poverty reduction strategies; issuing Labour and Land Reform Proclamations to secure the equal status of women in society; and working closely with the National Union of Eritrean Women (NUEW) to coordinate, monitor, and implement gender-equality programs and policies across all sectors of society. Although gender equality is yet to be achieved and several considerable challenges remain, the efforts represent tangible steps in the right direction, both for the status of women and in terms of fighting HIV/AIDS.

In addition to the broad socio-cultural, political, and legal factors contributing to the nation’s HIV/ AIDS response, Eritrea’s national public health measures have proven quite effective. Like other countries that have made successful responses, commitment has come from the highest level, starting with President Afwerki, who states that, “[i]t is our timely duty, more so than at any other time, to go beyond control, to eradicate this dis¬ease from the face of the earth and to defend ourselves against it.”

Notably, Eritrea’s Ministry of Health (MoH) has been central within the national response. Specifically, it established a national HIV/AIDS policy that, amongst other things, provided guidelines on preventative activities, the provision of treatment and care, and securing the rights and dignity of people living with HIV/AIDS. A noteworthy, tangible outcome of the policy was the implementation of the HAMSET programme, which seeks to reduce the economic, social, and health burdens caused by HIV/AIDS, Malaria, Sexually Transmitted Infections (STIs), and Tuberculosis. Particular features of the programme include data collection, upgrading resources, expanding and enhancing facilities, and improving health management structures (Muller 2005).

A useful illustration of the MoH’s commitment to the health of citizens living with HIV/AIDS is the national provision of antiretroviral therapy (ART). Table 2, utilizing figures available from the WHO and UNAIDS, illustrates that estimated total ART coverage (as a percentage) in Eritrea had recently risen to 73%. For comparative purposes, other countries in the region posted the following figures: Ethiopia – 60%; Djibouti – 31%; Kenya – 73%; South Sudan – 8%; Uganda – 64%; and Africa as a region – 57%.

National institutional efforts, particularly the establishment of Voluntary Counselling and Testing (VCT) and Prevention of Mother to Child Transmission (PMTCT) centers, have also been critical within Eritrea’s response. There are two types of VCT sites: free standing and integrated VCT sites located inside health facilities. VCTs, which offer rapid testing and pre- and post-test counselling, are staffed with trained counsellors, and they operate according to national guidelines. PMTCT centers chiefly focus on pregnant women, offering testing services and supporting those found HIV positive in preventing the trans¬mission of HIV to their children. While in 2001 there were a mere 19 VCTs (18 integrated and 1 free standing), by 2011, there were 239 VCTs dispersed throughout the country (228 integrated and 11 free standing). Regarding PMTCTs, whereas in 2002 there were a total of 3 located in Eritrea, by 2011 there were a total of 198 PMTCTs found across the country. Simply, VCTs and PMTCTs have expanded at a highly impressive rate; consequently, Eritreans have received greater access to better quality care (quite important for rural populations), as well as vital training, education, and support.

Another important component of the nation’s response has been the National Union of Eritrean Youth and Students (NUEYS), which has promoted education and awareness of HIV/AIDS across all demographic groups. First beginning its activities in the 1990s, NUEYS has been vigorous and effective in the social marketing of condoms, communicating safe practices, offering awareness and educational pro¬grams, and providing youth or peer counselling. As a result, awareness of HIV/AIDS [is] nearly universal [in Eritrea]” (Muller 2005).

A unique and highly effective element within Eritrea’s HIV/AIDS response has been the use of the Rapid-Results approach in implementing the country’s long-term HIV/AIDS strategic plans. The Rapid-Results approach focuses on “introducing highly choreographed 100-day projects into large-scale programs and projects, in ways that create local ownership and accountability for results, and that inspire innovation and collaboration among stakeholders at the local level.” The use of several Rapid- Results based projects saw tremendous expansion in the utilization of VCTs and safer practices exhibited amongst at-risk populations. Furthermore, new health programs were implemented in schools across the country, where the foci included life skills and safe behaviours.

Any discussion of HIV/AIDS responses must also consider the issues of stigma and discrimination. The two topics present basic rights challenges and arouse questions of human dignity, while also potentially influencing the spread of HIV/AIDS since they represent clear disincentives for testing. Importantly in this regard, Eritrea has established The Association of People Living with HIV/AIDS (BIDHO). The organization combats stigma and discrimination, offers supportive measures for people living with HIV/AIDS (including micro-finance programmes), and gives care equal importance with prevention (Muller 2005).

Building on the work of BIDHO, The Good Samaritan Programme has also been a useful initiative in reducing stigma. Coordinated with the Catholic Church, the programme offers home-based care, as well as spiritual and psychosocial counselling to patients. Additionally, it assists people living with HIV/AIDS to access ART and follow up care, thus supporting them in maintaining employment, schooling, or other important activities. Though the initiatives have witnessed positive results, it is acknowledged that stigma in Eritrea is still “widespread… [and]…discourages people from undergoing testing.” Accordingly, one potential step Eritrea can take to further combat stigma and discrimination is to enact national laws or proclamations that protect people living with or affected by HIV/AIDS.

According to Piot and Quinn, “‘[t]here is consensus that no single intervention can stop the spread of HIV and that combination prevention is the best approach. Effective biomedical interventions coupled with behaviour and structural approaches may now successfully reduce the incidence of HIV infection to very low levels and ultimately control the epidemic” (2013: 2216). The preceding discussion outlines that Eritrea’s response has been multisectoral and has also involved the targeting of harmful social behaviours and traditions. As a result, Eritrea has witnessed significant progress combating HIV/AIDS within a short time period.

Considering its figures and improvements in the context of its various socio-economic, development, and regional challenges or in comparison to other countries throughout Africa, Eritrea’s success becomes particularly striking. Potentially serving as a model for Africa, Eritrea’s HIV/AIDS response also illustrates what can be achieved with a self-reliance approach, a capacity to adapt, effective coordination, and cost-effective projects.

Nonetheless, Eritrea must still confront several challenges: there have been slow behavioural changes regarding safe practices amongst some segments of the population, stigma is still readily apparent, women’s equality remains an ongoing struggle, and expansions of care and treatment (such as for pregnant women) are required. To overcome current challenges and build upon past success, Eritrea should maintain its prioritization of health, continue to work with the UN and other development partners, and further promote the eradication of HIV/AIDS throughout the country.

*Source: 2012 figures from WHO and UNAIDS