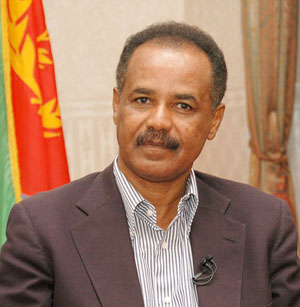 A delegation of the African Union Commission is on a four-day visit to Eritrea for extensive discussions with relevant government bodies on the “Domestication of Agenda 2063 and the First Ten Year Implementation Plan”.

Asmara, 04 December 2015- A delegation of the African Union Commission is on a four-day visit to Eritrea for extensive discussions with relevant government bodies on the “Domestication of Agenda 2063 and the First Ten Year Implementation Plan”.

The AU delegation held meetings with the Minister of National Development, the Minister of Transport and Communications, as well as with senior officials from the Ministries of Finance, Information and the Auditor General’s Office.

The Ministry of Foreign Affairs and the AU delegation jointly organized a workshop on the same theme in Asmara yesterday for a wider audience from several government bodies and civil society associations.

As it will be recalled, President Isaias Afwerki had articulated Eritrea’s views on AU Agenda 2063 in the publication of AU Heads of State and Government issued on the occasion of the Golden Jubilee of the Union in 2013; (see attached article).

As we commemorate the 50th anniversary of the OAU/AU under the theme “Pan Africanism and African Renaissance”, and soberly ponder on where our continent will be positioned in the global pecking order 50 years henceforth, I personally believe that the tribulations of our past and the enormity of the multi-faceted challenges that we face at the present should not, in any way, eclipse Africa’s immense potential and higher prospects for vigorous, sustained, and all-rounded progress in the next fifty years.

True, the balance sheet for the past fifty years is not rosy or entirely positive when our continental performance is gauged in comparative terms against the most essential economic, political and social indicators.  Among other things, Africa’s share of global trade remains at a pittance 3%; foreign investment continues to be skewed to the extractive industries; intra-State and internal conflicts continue to wreck havoc to our societies; poverty, deprivation and diseases afflict the majority of our citizens; and, our innovative potential continues to be eroded by debilitating brain drain.  In a nutshell, marginalization, with all its economic, political, security and social ramifications, has remained Africa’s lot for the better part of our existence as a community of independent States.

But this rather grim history should not cast its dark shadow on the new, brighter, narrative that we aspire to enunciate and see crystallized in the next tranche of fifty years of our collective voyage.  This will, of course, require the articulation of appropriate and visionary policies, strategies, and programmes of action at the three, complementary, pillars of our continental institutional architecture: the Nation-State; the Regional Economic Cooperation organs, and the African Union.   Needless to emphasize, articulation of new or revised policies, programmes and institutional arrangements will depend on critical appraisal of our performances in the past as well as in a proper and realistic reading of developments and trends in the wider global environment.   In this spirit, let me briefly outline Eritrea’s perspectives in the modest hope of contributing to the animated debate that is already on the offing at this important historical juncture.

1.    Independent National Policies:  The vivacious perspectives espoused by the Casablanca and Monrovia Groups when the OAU was established in 1963 have perhaps lost their original luster in our contemporary times when there is almost universal consensus on the indispensability of the Nation-State as the constitutive element of any regional association of any kind.  Indeed abstract economic considerations of optimization or rationalizations of economic growth are not the sole determinant factors in complex societies where national, ethnic, cultural, historical identities and psychological dispositions, affiliations and loyalties have far higher importance and transcend purely material economic calculus.   So, in all probabilities, Africa will not coalesce into one single polity fifty years henceforth.  The nation-states, and the regional economic blocs, will remain as the constitutive elements of the Union and the key fulcrums for economic development and social progress.  What will require further articulation is therefore the policies and programmes that are enunciated at the three distinct pillars in order to enhance better synergy and complimentarity; issues that I will revert to, later.  In as far as the nation states are concerned, the experience in the past fifty years has largely been that of dependence on dominant external players for inspiration and policy direction.   In terms of economic development, African countries did not have much latitude to chart out their own models responsive to their own situations outside the “orthodoxies” preached by the Bretton Woods Institutions and/or other benefactors.  Polarized ideological perspectives within the global context of the Cold War in a bipolar setting further informed and determined the political discourse and models of political governance and State institutions in Africa for the best part of the last fifty years.  This must change for Africa to regain its soul, map out its own development path and raise its global status.   Global economic trends are also indicative of substantive changes in the making.  Asia and Latin America will increasingly become prominent players on the global scene in the next half century.   The opportunities and latitude of action that this may afford to Africa are factors that must feature in our thinking as we fashion development approaches and political models of good governance that are better suited to our own specific realities.

2.    The Peace and Security Architecture: Peace and security are clearly pre-requisites for any economic development and for the welfare of our peoples. Conflict prevention and resolution indeed remains Africa’s Achilles heel to date. The rationale for concerted action primarily to prevent conflicts and to resolve them effectively when and if they erupt is thus too palpable to merit elaboration.  Both through its Constitutive Act as well as through subsequent resolutions and Protocols, the African Union has supplanted the traditional OAU principle and praxis of “non-interference by any member-State in the internal affairs of another” with the concept of “non-indifference” in cases of “genocide, ethnic cleansing and crimes against humanity”.  The African Union has also created the necessary institutions – the Peace and Security Council, the Conflict Early Warning System, the Panel of the Wise, and the African Standby Force – to bolster its tasks of peace-making and peace-building.  The wars in Somalia, Libya, Cote d’Ivore, and Mali however portray a different narrative than what is suggested in the premises and operational structures of the AU’s peace and security architecture.  The primary actors in all these instances were and continue to be external powers; the agendas are also primarily extraneous and not always and necessarily aligned with the interests of the peoples and nations concerned or with Africa at large.  The fact that AU’s peace-making and peace-building efforts depend on our external partners for much of the financing needs is a factor that accounts for this anomaly.  Larger issues of structural dependence, the proliferation of foreign military bases and other alliances between individual African countries and major external powers – AFRICOM has bases or military prepositioning presence in 35 African countries today – are other deeper malaises that will require adequate remedies if Africa’s peace and security architecture is to maintain its independence and for Africa to act solely on the basis of its jurisdictional prerogatives and considerations.

3.    The Regional Economic Blocs: Geographic contiguity, higher cultural affinities, economic complimentarity and scale, and, vital security interests are among the main parameters that have historically prompted the establishment and consolidation of regional economic associations in the continent.  As Africa’s political union is an ideal that can only be contemplated in the distant future, the RECs must constitute the primary building blocks for much closer political, economic and security associations for the foreseeable future in what has been termed as the modular approach to ultimate African political unity.  But the recent trend seems to gravitate towards the creation of new RECs that have overlapping memberships and mandates – IGAD, EAC, CENSAD, SADC, COMESA etc.  The potential wastage in resources and efforts that unregulated regional configuration might incur might thus be a task that warrants sober appraisal in order to formulate workable formulas in the future.  On a more substantive level, the RECs are the most appropriate vehicles for aggressively pursuing Africa’s air, sea and land connectivity.  While much is being done along these lines, national and regional investments must be funneled in accordance with clearly calibrated objectives and timelines to ensure progress in all the regions within specific timelines.

4.    Africa’s fault lines and emergent problems: As we contemplate modalities and timelines of regional economic cooperation and African unity, the reality in individual African countries remains exceedingly worrisome due to deepening centrifugal tendencies of ethnic/religious polarization, disharmony and strife.  These are grave fault lines that have corrosive impact on the fabric of our societies and efforts of nation-building.  The remedies lie, among other things, on inclusive policies and programmes of even development and social justice that our individual governments must pursue with the requisite seriousness and consistency.  Myopic policies of institutionalizing ethnicity as well as ill-advised practices that perpetuate the polarization of society along ethnic and religious lines for electoral or other short-term gains must thus be discarded if we really wish to cultivate the social harmony in our societies that is critical to internal stability, economic progress and sustainable development.

5.    Forging strong links with the Diaspora: Africa’s Diaspora – in the broadest sense of the term – is not only very large in numerical terms.  But the Diaspora can also act as vital sources for investment, technical expertise and genuine partners for joint development particularly with countries of African Diaspora preponderance.  The next fifty years may indeed turn out to be auspicious times for reversing the brain drain of the past.

6.    AUs enhanced global advocacy: The AU’s primary functions in the next fifty years will not revolve around devising policies and institutions of immediate African political and economic unity.  The tasks of economic integration will remain to be delegated to the RECs.  But the AU can perhaps play a greater role in its advocacy of our continent’s vital interests in the areas and negotiations of fair trading regimes, climate change and other major global issues that impinge on Africa’s developmental trajectories and challenges.  The AU will become more relevant and potent if it focuses less on ambitious structures and programmes of continental unity that will not be realistically achieved in the timeline in question and more on an effective division of labour with the RECs for functions and objectives that can be better realized at the respective local levels.

In conclusion, Africa’s rich endowments and resources, its demography, the advantages of the ICT revolution and globalization, the cumulative investment of African countries in their human capital, and realistic and achievable programmes of infrastructural development and connectivity that Africa has already embarked on and that can be accelerated in the coming decades can allow Africa to make steady and meaningful progress in the next fifty years.