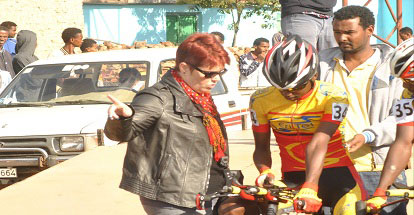 Last Sunday morning, people flocked to the ‘Semaetat Avenue’ to be part of the one of the many cycling tournaments that the avenues and streets of Eritrea host often. With a history that goes beyond 75 years and with an established legacy, cycling has become a native sport: involving at the moment countless youth in domestic stages with some 15 others, making history  for the country on international stages.
These young riders that put out their hearts on the racing roads have assured a smooth sail for Eritrean cycling.
On that specific chilly and warm, which is by the way the very certain unexplainable speciality of the ‘home weather’; one of the spectators there, was Isabel Fernandes, RIO 2016 Road Cycling Sport Manager.
She spared us some time to share her thoughts, and today we present you the interview we had with Isabel Fernandes.

It  has  been  almost  thirty  years now. I started when I was seventeen and  once  I  turned  nineteen  I officially  started  translating  for foreign teams. I don’t know how I got it to cycling; nobody in family is related to this sport.

Yes  this  is  my  third  visit.  I  was here in 2013 first, for international tours. I was here last year too. This time I am here for organization.

The  biggest  advantage  you  have here  is  the  fact  that  cycling  is  a national  sport.  People  here  have passion  for  the  sport.  If  there  is  a tournament, big or small it doesn’t matter,  everybody  is  out  in  the streets cheering the cyclists. Cycling has become part of your culture and the  geographical  country  of  your country has given you some know-hows that you adopted and you are using to your benefit.

The  growth  Eritrean  cycling is  attaining  both  on  local  and international  races,  is  because cycling,  here,  is  widely  loved, followed  and  supported.  Along with the government’s support you will definitely even more. Of course, there are some things  that  need  to  be  worked  on.  Since cycling is a scientific sport, there are some things that need to be fiddled with,  especially  on  the  technical aspects. Other than that, everything is best suited at the moment. It is a rare thing, and especially in Africa,it is a common flaw.
‘Starting’  is  the  hardest  step  to fulfill, but here you have done that already  and  achieved  much.  So  i  see no further inconveniences.

In  2008  Eritrea  had  only  one rider on international stage: Daniel Teklehaimanot.
Nevertheless in 2015 the number of  Eritrean  cyclist  riding  outside of  Eritrea  reached  15.  And  this  is not  a  simple  move  forward.  You can  see  that  both  the  people’s  and government’s support has paid off.

Like  I  said  earlier  now  that  you have  started  there  will  hardly  any problems for Eritrean cyclists. I can say  the  established  tradition  you have  here  is  the  main  push  factors to  Eritrean  riders  on  international stages.

Eritrea  has  a  long  history  of cycling…

Yes  it  does.  Just  like  Colombia made  big  triumphs  for  South America,  reaching  levels  never seen  before,  Eritrea  too  is  doing the  same  for  Africa.  Which Eritrea  is  the  Africa’s  Colombia. Eritrea  now  is  exceedingly  known to  the  world  for  its  cycling.    I  can see how your history is motivating today’s generation of cyclist. There is clearly pride, passion and dignity in your cyclists. In addition they are well aware of the support the people is  commending  on  them,  so  they work hard and are very dedicated.

Unfortunately all over the world, women’s  cycling  is  not  as  big  as men  cycling.  Nevertheless,  here even though it is not great yet, but is notably improving by the day: in fact not  only  on  domestic  tournaments but also on continental tournaments.
It  is  worth  remembering  that  the national  cycling  team  for  Eritrean Women were champions in the All African Games of 2015.

A  message  to  young  Eritrean riders; I want to tell them that they too  can  make  it  big.  I  commend them on their hard work, dedication and the passion they have for what they do. I wish them the best.