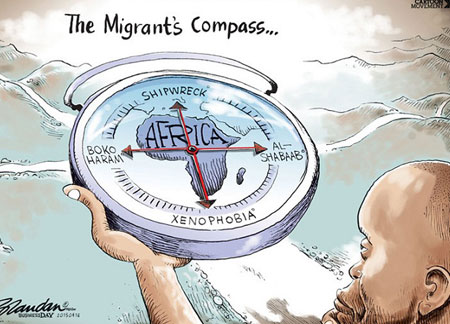 To  assess  Eritrean  migration  by relying  on  UNHCR’s  numbers  “is to fall prey and be entrapped by an unreliable dataset”  argues  Sam  B. in his meticulously researched paper, Phantom Refugees and UNHCR: The Case of Eritrean Refugees and Migrants. UNHCR’s datasets  have  long been discredited through fact-based research such as the one mentioned here and fact-finding missions conducted  by  a  number  of  reputable individuals and institutions such as the Danish Immigration Service.

Although  there  have  been  many conspicuous inconsistence over the years,  one  of  the most  publicized documents  that  highlighted  UNHCR’s  inconstancies  was  the  report  for  the  Danish  Government’s fact finding mission to Eritrea and Ethiopia  in  late  2014.  While  UNHCR  was  publically  maintaining that “Ethiopia hosts nearly 107,000 Eritrean  refugees”,  it  privately  informed  the  Danish  Immigration Service  that  the  actual  numbers were significantly lower.Danish  Immigration  Service (DIS)  in  its  report  writes:  “Currently;  UNHCR  has  registered  a total  of  73,680  Eritrean  refugees in  its  Shire  operation.  In  reality, though, it is known that fewer Eritreans than this figure are actually living in the four refugee camps in Northern Ethiopia.

Sam B. concludes that:

Obviously, sensationalist reports attract  donors  and  melodramatic headlines  sell  papers.Cooked  or not,  the  higher  the  number  the louder  the  buzz  it  creates. Add  to this a few heart-wrenching pictures of  women  and  children  –  even  if unverified, and even if previously used for completely unrelated articles – and you have an out of context  story  passed  for  “analysis”  of a situation that requires much more nuance  and  much  less  copy  and paste type desk research.

In  one  article  after another,mainstream  media  journalists  present  an  “inside  Eritrea” picture that not only makes a mockery of any serious attempt to  understand  the  multi-layered, dynamic,  and  complex  nature  of migration  –  including  the  fact that  migration  is  not  a  phenomenon  exclusive  to  Eritrea,  and  it certainly is not a new marvel – but they  also  deliberately  ignore  the all  too  obvious  pull  factors  that have  contributed  disproportionately to the luring and entrapping of youth – many of who realize the false promises only a few months after they reach the shores of the “promised land”.

Mainstream media’s coverage of migration and human trafficking as it affects Eritrea has been biased and highly politicized leading to much confusion on the issue. The explanation given for “harsh” conditions inside Eritrea misses the point by a mile.  No  reference  is  made  to  the no-war-no-peace  situation inside the  country  caused  by  Ethiopia’s calculated  hostility,  its maneuvering  inside  regional  bodies,  and  its refusal to abide by a final and binding  decision.  Furthermore,  preferential treatment of Eritrean asylum seekers designed to drain Eritrea of its  most  important  resource,  along with  sanctions  based  on  cooked evidence  of  support  for  terrorism, and  an  intrusive and biased  UNHCR  stand  against  the  country’s government and people has greatly tainted  the  debate  on  migration.

Contrary to the image aggressively promoted in certain circles, Eritrea itself  is  the  victim  of  a  deliberate “human  trafficking”  scheme  designed  to  weaken  and  destabilize the country.The strategy to weaken Eritrea’s defensive  and  human  resources capabilities  goes  back  to  the  early 2000s. This scheme was essentially devised by Washington. The first act towards this end was the calculated granting of asylum to the Kunama as “a particularly persecuted ethnic  group”.  UNHCR,  Canada, the US and some northern European  countries  were  involved  in  the project.Israel was also involved.

The  Government  of  Eritrea protested  this  at  the  time  and sent  a  demarche  to  the  UNHCR. Eritrean government officials had been saying this for years now with few believing  them.  It  was  only when Wikileaks cables released by Bradley Manning in 2010 uncovered  hundreds  of  internal  cables and  memos  that  a  semblance  of truth  began  to  emerge.  Not  only did the confidential leaks provide evidence  of  Ethiopian  state  involvement in smuggling Eritreans as  part  of  their  foreign  strategy but they also demonstrate that the world’s sole superpower, the United States, was picking a fight with Eritrea through politicized smuggling of  Eritrean  youth  with  the promise of “greener pastures”.

Dreams vanished. Hopes dashed. Lured to hell. All  of  this  points  to  a  systematic policy of stripping Eritrea of its youth,  especially  those  enrolled  in National Service, in order to weaken and destabilize the country.

Step back from Eritrea for a minute  and  take  a  wider  look  at  any mainstream  and  contemporary  understanding  of  the  migration  “crisis”. Shortcomings in these analyses abound.Will anyone discuss the fact that  many  of  these  countries  have been  destroyed  to  the  ground  by those in power now sounding off the “migration crisis” alarm bells? Will anyone  discuss  the  fact  that  developing  countries  have  been  coerced into  accepting  an  economic  order that is by any measure unfair to their peoples? Has any of those so-called experts  been  able  to  truly  analyze the  situation  referring  to  history  – far  and  near  –  and  taking  into  consideration  the  impact  of  their  own countries’  economic,  political,  and geostrategic policies and alliances?

All of this is obviously too much to  ask.  It  would  require  serious scholarship and if one brave journalist actually dares write something as comprehensive and as multi-layered as the “crisis” itself, his or her paper would  certainly  not  make  the  cut. There  are  corporate  boards  to  pander  to.  There  are  editors  to  worry about. There  is  a  career  rite  of  passage to follow.So regurgitated smear campaigns  will  do.  They  discuss supposed push factors in a vacuum, putting  all  blame  on  the  country  of origin – or more specifically, the targeted “unfriendly” government.

Having  said  all  this,  the  rule  of thumb  for  digesting  mainstream “analysis”  on  any  subject  matter –  especially  a  topic  as  highly  politicized  as  migration  –  should  be asking on whose behalf is the story being flashed across front pages of  major  newspapers?  On  whose behalf is the story “breaking”? On whose behalf is it worthy of a label as ominous as “crisis”?
Only then can one see mainstream corporate media’s slant for what it is  –  an  extension  of  a  calculated campaign  aimed  at  demonizing a  country  determined  to  carve  its own development – economic, political, and social – path.