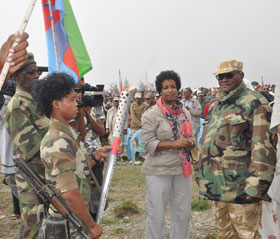 Eritrea’s Jubilee Independence Celebrations commenced today, Friday 15th January, through a ceremony of lighting of the Independence Torch in the historic town of Nakfa.

Asmara, 15 January 2016 – Eritrea’s Jubilee Independence Celebrations commenced today, Friday 15th January, through a ceremony of lighting of the Independence Torch in the historic town of Nakfa.

Major General Humed Karikare, Commander of the Eritrean Navy, presided over the torch lighting ceremony in the presence of Army Commanders, village elders, religious leaders and members of the public.

Ms. Tsegereda Woldegergis, Governor of the Northern Red Sea Region, stated that the Independence Torch prompts us to evaluate – as a people and nation – to what extent we have fulfilled the pledges we have made in past 25 years to uphold and advance the vision and dream of our martyrs.

The Independence Torch will cover more than three thousand kilometers in all the Regions of the country and reach Asmara, Eritrea’s capital, on Independence Day.

In interviews with local media on the occasion, Ambassador Zemede Tekle, Chairman of the National Holidays Coordinating Committee, announced that extensive preparations are already underway both inside the country and abroad for the celebration for the Silver Jubilee of Independence Day under the theme “Quarter of Century of Resilience and Development”.

Thousands of Eritreans residing abroad and friends of Eritrea are expected to participate at the Jubilee Independence Day celebrations.