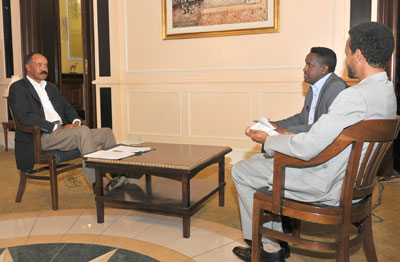 President Isaias Afwerki elucidated government policy on key domestic issues, overall developmental progress achieved in the past year as well as government sectoral priorities and programmes for this year in an extensive interview that was broadcast live by Eri-TV and Radio Dimsti Hafash yesterday evening.

Asmara, 23 January 2016 – President Isaias Afwerki elucidated government policy on key domestic issues, overall developmental progress achieved in the past year as well as government sectoral priorities and programmes for this year in an extensive interview that was broadcast live by Eri-TV and Radio Dimsti Hafash yesterday evening.

President Isaias underlined that issuance of the new Nakfa Currency Notes was preceded by in-depth appraisal of the necessary fundamental financial parameters.  This particular instrument is part and parcel of the structural adjustments that must be taken to strengthen and invigorate the economy, President Isaias pointed out.  Issuance of the new Nakfa currency note will not, in itself, bring about miraculous   economic change.  However, the government is taking incremental and supportive measures to bring about the desired changes.  There are positive signs and trends even if the time elapsed so far is too short for comprehensive assessment, President Isaias noted.

President Isaias explained that the new increased salary scales implemented for new graduates drafted in the Civil Service will be fully applied to the entire Civil Service, PFDJ and associated bodies with appropriate adjustments when the ongoing processing of relevant personnel data is completed.

In responding to the food situation in Eritrea this year in view of the harvest shortfall that has affected the whole Horn of Africa region, President Isaias stated that the country will not face any crisis in spite of reduced agricultural output due to the GOE’s judicious policy and approaches of bolstering its strategic food reserves.

President Isaias also described in detail the government’s comprehensive policies on urban and rural housing.  Noting the chronic housing problems that still prevail in virtually all cities and towns, President Isaias stated that the GOE intends to ramp up its capabilities and work with other partners to fully address this challenge on an expeditious basis.

President Isaias also talked at length on government policy of “zero-tolerance” to corruption as well as government approaches to and progress made so far in the constitution drafting process.  President Isaias further stressed the need to strengthen the political work of the PFDJ.

President Isaias will dwell on relevant regional and international issues in the second part of the interview scheduled to take place later today.