Za.Er and its ‘Made in Eritrea’ Shirts 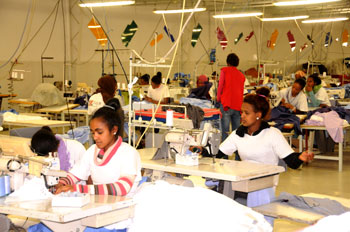 Work ethic and professionalism are just a few of the many terms describing one of Eritrea’s most well-known companies.

With its cotton upper-body collection, ranging from swanky tops equipped with matching collar, sleeves and buttons to simpler shirts often brandished by Asmarino gents for their ladies, Za.Er Company, or Dolce Vita as it commonly known here, has produced an array of fashionable products that many have come to know and trust.

The Asmara-based Za.Er, deriving from a truncation of Zambaiti-Eritrea, is Eritrea’s first industrial textile company, making possible the “Made in Eritrea” label for international export in the textile market.

Kindly opening their doors, my colleagues and I visited of the company this week, allowing us take a glimpse of their work and meaning to Eritrea’s economic development.

Za.Er holds the belief that the key to quality and efficiency is to engender professionalism and hard work, virtues worthy of reward. As such, Za.Er is surely a model to Eritrea’s economic development.

Looking back into history, the company was initially established at the time of the Italian colonization and was known as the barattolo factory. It operated efficiently until the Dergue took control of it and nationalized it. For years until independence, the factory was disregarded and left to ruin.

An Italian man named Zambaiti visited Eritrea during the time of independence, immediately showing interest in the factory and Eritrea’s strong industrial potential.

With only the pillars standing back then, few could imagine that Zambaiti could turn the factory into the success that it is in today’s Eritrea.

Why did he choose Eritrea? I posed the question to Mr. Pietro, Zambaiti’s son. He smiled and explained that his father fell in love with the country and noticed its huge potential, ideal climate, strategic position and its people.

Mr. Pietro Zambaiti, the current CEO, explained that after negotiations and discussions with the Government of Eritrea, it was finally agreed upon to buy the factory for 1 USD.

Yes, I was surprised by the amount. However, Mr. Pietro explained that buying for 1 USD was actually a symbol as the significant investment was skyscraping.

“At the beginning we had to renovate the infrastructure, it was somewhat ‘archeological’ compared to international standards! We also had to bring machineries and train human resources from scratch. It was a huge investment but worth the price”, he explained.

As a matter of fact, the company re-established in 2004, started production in 2005 and made a significant bet that a “Made in Eritrea” niche within the textile sector could successfully compete in the international market.

Experiencing some financial difficulties between 2007 and 2009, in line with the global economic crisis, the company was able to effectively weather the storm.

As we walked around the factory, we are impressed by the high technology and volume of machineries available. Starting from the raw cotton all the way up to embroidery, one can get lost between all these machines.

In terms of economic development, while I observe the immense amount of cotton, I wondered if the whole process from raw material to manufacturing was actually from Eritrea.

To meet its own standards for high-quality product, ninety percent of which is exported to high- and medium- markets, Za.Er derives its cotton from cotton-producing West African countries such as Burkina Faso and Ivory Coast. With globalization, quality control remains an important component in the manufacturing process.

Nonetheless, the company will experiment with using Eritrean cotton for the first time this year, in line with founding values centered on exploiting domestic products. However, local productivity issues could not answer the huge demand.

Za.Er produces 800 shirts a day with plans to expand to 1,200 shirts a day by the end of 2016. To meet these large fabric demands, Za.Er imported both the raw materials and the actual fabric.

The clothes not only goes to Italy and other European countries but also to India or China, depending on the clients. Thus, who, exactly, are the clients? Who’s wearing “Made in Eritrea” shirts?

Most clients are located in Italy such as the Italian Scout Association but also department stores such as Lina Cente, Nara shirt or Pierre Cardin while there are other clients based in Croatia, Turkey, and Thailand, among others. In the near future, the company is targeting the Middle-Eastern markets but also Sudan and other East African countries.

Za.Er does not solely produce for the international level, as you may already know, there are a collection of Dolce Vita shops in Asmara and Keren. Besides this, the company also produces local uniforms.

The Dolce Vita shops, particularly the one right in front of Cathedrale, are symbols of successful business in Eritrea. From the bed linens to the trendy shirts, urban dwellers have a range of options to please them.

Historically, Eritrean men living in the highlands have sought the look of elegance. This trend continues today in both the young and old, wearing finely tailored shirts with mixed or classic fabrics. The market is mostly at the advantage of such men with about twenty male shirts sold for every one female shirt.

Locally, one may wonder the perception of tailors regarding the factory. Mr. Pietro explained that the idea is not to swallow up smaller local tailors but to locally promote the values of professionalism and discipline in an environment where employees are given the chance to grow and attract other investors in the country.

Za.Er’s production line divided into three segments: garmenting, spinning and shirting. We witness the employees working ardently in each department under the purview of their departmental heads and supervisors. With about 540 staff members, eighty percent of which are women, it was important for Za.Er to create a staff-friendly environment.

As any forward-looking company, Za.Er has created an atmosphere where employees have the possibility to grow within the company, continue to learn while getting a higher salary than average wage in Eritrea.

On the wall of the shirting unit, we noticed a table where attendance, break times and schedules were monitored by supervisors. Pietro explained that through this system, workers learn the values of discipline at work and are provided incentives for good work.

Indeed, this idea of merit is clearly showing success, reflected in their salary. Whether one is a new staff member or not, as long as he or she is working well, he or she will get rewarded. Accordingly, the ideas of know-how, in terms of discipline and technical expertise, are key components to Za.Er’s success today.

In addition, according to the years within the company, workers get a salary increase each year. Heads of department have made their way up through hard work, starting at the company’s founding.

Next, we witnessed some of the workforce on lunch break while others worked. There are two shifts, which enable production to continue. By working from 7 a.m to 4 p.m, Eritrean workers are working in fair labor conditions.

I realized that some workers were wearing green gowns while others red ones. The green ones are new staff on training while the red ones are for supervisors.

One may wonder what sort of training they undergo. All new staff go through safety and security training, including training for specific tasks such as ironing. Often, expertise comes from Italy and other countries to enhance the savoir-faire of workers, in line with the standards imposed by the international market.

So, what makes Za.Er unique? Clearly, its staff-friendly environment gives a bonus to this textile business. Often, the textile industry is usually negatively connoted in terms of labor conditions. However, here in Eritrea, the company manages to have both a quality product while keeping its employees happy. Mr. Pietro stressed that the idea is to keep up the momentum and overcome employee turnover.

“We want to recruit people who are not dreaming of leaving the country but instead willing to learn, work and grow in their endeavors and be part of Eritrea’s development”.

Yet, turnover remains one challenge the company is striving to eradicate. In doing so, social services are fully available and free of charge. With about eighty percent of workers being female, it was mandatory to establish a daily children care.

Furthermore, a colorful kindergarten cannot go unnoticed by visitor immediately when they enter the factory. Qualified social workers were taking care of employees’ children, feeding them and helping them with homework. Additionally, Za.Er is in charge of schooling at higher grades, sending students to the Italian School of Asmara.

Impressive indeed but that’s not all. Bus services are also available to workers while a nurse is present every day to respond to

the needs of employees. Besides these attractive facilities, all employees remain Eritreans besides the CEO, Mr. Pietro.

As he comes for work visit for two weeks every two months on average, he says that he seems to fully rely on his right hand and left hand: two ladies who went abroad to study, returned and are now in charge of the managerial part of the company.

Despite the promotion of the values of professionalism that Za.Er Company promotes on a daily basis to its employees, this business is surely playing a key role in nation branding. “Made in Eritrea” products are being worn in different parts of the world, which can only be beneficial to Eritrea.

Pietro explained that despite challenges in terms of energy supply, the company is planning to expand its productivity but also diversify its sector of activities.

“It is not all about producing and selling. I do love my job but I love Eritrea and, to me, I am working P.R. for the country and am confident that its huge economic potential will be witnessed by continuing its openness and cooperation with the international”.
Values of professionalism, a staff friendly environment and a system of merit are surely the key ingredients to the success of Za.Er exporting the “Made in Eritrea”.