Mesob: the Symbol of Unity and Prosperity 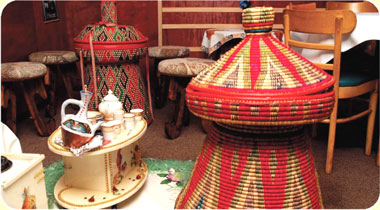 It is one of the various Eritrean traditional handicrafts made of the palm raffia, adorned in a diversity of colors and accomplished through efforts of creativity.
This beautiful household utensil, where food (injera – the sourdough flatbread) is kept or even a traditional Tigrigna dish is served is Mesob, or the breadbasket.

Its name has been used for long as an idiom for prosperity and affluence as it is the hub of food security among the Tigrigna society in particular. Thus describing Mesob as a symbol of Eritrean prosperity, unity and creativity would only be doing it justice.
When Eritrea presented its cultural artifacts at the 2010 World Expo in China, the Mesob, beyond the expectations of the organizers, was among the biggest attractions. Undoubtedly, Mesob has the artistic touch and beauty.

Whether it has food in its bosom or not the Mesob is always at prosperity in its traditional beauty.

The way the Mesob impressively stands straight hints perhaps to its primarily intended design to stand as a perfect symbol of affluence. Looking at it with analytical eyes, it looks like a champion of artisanship.

Wide at its base, it goes on narrowing until its waist. But the head appears again to be the widest circular structure.
This bestowed it the structure of a woman with tight waist, giving the dexterity of art as though it was born out of thoughtful attempt of a professional architect. Moreover, the structure resembles the traditional way of dressing of Tigrigna women, which again stands as a token of beauty.

As you proceed from just seeing to looking, you can’t help noticing the secret symbol of the society: the circle.
Most other household items are based in circular structure, the Mogogo (clay oven), the Kitcha (the traditional bread), the Tsahli (traditional earth ware casserole) and the Injera itself all feature a circular structure. It then dawns on you that this is simply the traditional invention of the Eritrean mother who, apparently, didn’t have any idea of designing.

Many years ago, an Eritrean mother had to come up with something that would serve her as storage for injera, her most delicate

food. And she had to do it with materials readily accessible to her. So she came up with the idea of using the palm raffia (or the fiber from its leaves). She split it into tiny strands and made tiny bundles, wrapped them with a straw fiber, which she then wove together to make the beautiful Mesob.

Looking at the intricate process of making a Mesob, one can only imagine that it might have taken a very long time. A woman can complete one Mesob in around five months. And this is taking into account the fact that the mother only does it in her part time, after a tiresome day of domestic chores. But the beauty is worth the wait.

The mother takes one stitch at a time understanding one of best nature’s secret that time and patience always reward their clients.

It seems as though Mesob was deliberately made to denote the unity that Eritreans proudly boast, as one discovers that Mesob takes part in the culture that incorporates harmony and togetherness: the Meadi. If a western invention provided us with the dining table to gather around for a meal, a traditional family of the Tigrigna society would use Mesob.
While the sunken top of the Mesob serves as food basin, usually another Mesob is there to perform as a tabletop where everybody gathers around.

As everyone extends his hand to take his share from the food provided over the Mesob, it’s as if some sort of gravitational force draws everybody to integrate.

It is not an arbitrary choice then, for Eritreans to attempt to symbolize their unity and prosperity with this simple but ponderous invention.