“Not only one, but, two amusing jobs” 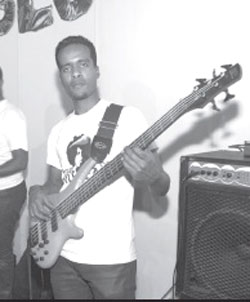 He is part of the well-known cultural troupe ‘Aser’. The group is known for involving many young men and women artist, which is one of the reasons why ‘Aser’ is likable. Eyobel Mikael is a member. But he is also a referee at the Sport Federation of the Central Region.
Let’s meet for today this very successful young man with, not only one, but two amusing jobs.

Was this some kind of a ‘child hood dream’?

I started it when I was 5 years old. My father is blind, he was taking guitar courses at Bidho so I regularly walked him there, and eventually I would end up listening to him playing the guitar. After time I started developing some real interests in it. That is where it all started.

I got a chance to inter Asmara Musical School and somehow they decided to let me join *Aser band: my teachers noticed that I had some talent … for a child.

At school, I originally signed for lead guitar but then I changed to base guitar and completed my course with it. My teacher Laine Belay charged me of ruining his class, he said I was ‘rushing’, compared to my class mates. So I was upgraded.

How did you get in to sports?

I used to watch football games at the stadium of Asmara. And so one day, it hit me; I wanted to be active in sports. I remember that specific day; I was there with my uncle and my godfather.
That is how I started watching every game, even if I had to go alone. My dream was not to be a football player but a referee. You know people always have something criticizing to say about the referee, I dreamt of being a righteous appreciated referee.

I dare to say yes. I didn’t sleep for five years to reach it, as result I have become best referee for consecutively five times.

Eyobel, I have heard that you also are a dance instructor?

It is part of what I do at the cultural Aser troupe … choreographing, I mean… correspondingly. You share ideas there. I love my troupe, I see Aser as a base of discipline, profession and a bridge of arts and professionalism.

Sure it is. They are of different nature. There are times in which I spend the whole day in the field and I stay all night awake to

play music in clubs, however I believe everything can be simplified, it is just a matter of will and wish.

Many times I had schedules collide, there is this one particular day I won’t forget. We had a program with Aser to play in Bisha on a Saturday night and on Sunday at 4 pm I was selected to officiate a Final game match.

I wanted to be part of both of the occasions, actually I needed to. So I did music all night long with Aser and traveled back to Asmara, I reached Asmara two hours before the game, and made it!

You’ve been nominated best on federal referee for five times, isn’t is a bit late advance to international referee?

I have all it takes to be an international referee the success I have achieved in the national league is proff enough but the decision is not mine.

Who is your favorite musician?

Laine Blata is a musician; he is someone who cannot be forgotten!

Not yet. But it is a chapter we all can’t skip, so it is one of my short term plans.

Anything you want to say before we wrap up our interview?

I am a product of many people. What I mean is that all of the things I have achieved and reached, were brought to fruition because alongside my dreams and my desires to do music and sports, I had so many people; friends, family and colleagues that supported my efforts.

So I want to take this opportunity to thank all the people who were there for me and motivated me to get to where I am at the moment. Big thanks to my music instructors Samsom Beyene and Laine Blata; also, the managers’ and my fellow members of Aser cultural band and the referee committee of the National Football Federation in the Central Region.