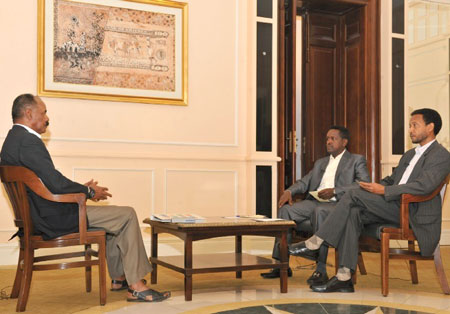 President Isaias Afwerki gave a live Radio and TV interview with the national media outlets on the 22nd and 23rd of January last week on the occasion of the New Year focusing on all-round developments inside the country as well as regional and international developments. Part I of the interview follows:

Q. Mr. President. Congratulations on the occasion of the New Year. The year marks the Silver Jubilee of Eritrean Independence. The Independence Torch has already begun the journey from Nakfa. In this connection, we intend to conduct, at a later date, an interview with Your Excellency on your appraisal of the achievements registered in the past 25 years since independence. For now, we will focus on current domestic and regional issues .

Let’s begin with the recent measures that the GOE has taken in regard to the redemption of the national currency. What impact is this measure expected to entail on economic growth? What are the associated specific policies and regulations that will be taken by the financial institutions in the country?

One of the tools that can facilitate the restructuring process is of course the currency. Again, it must be stressed that currency redemption is not a silver bullet or panacea for addressing or restructuring all economic distortions and anomalies. But it is an essential and indispensable tool for rectifying several distortions in the economy. As such, the introduction of new currency notes will serve as a catalyst or initial set of measures for bringing about the desired economic adjustments. The process is being implemented now after long preparations.

Full restructuring will require and be predicated on comprehensive assessments of prevailing economic distortions that include: irregularities in the exchange rate of the Nakfa, inflation, fiscal imbalances, and other undesirable trends that aggravate the living conditions of the citizens. These are problems that have accumulated over time. In the event, the solutions that must be proposed must be rooted on exhaustive and accurate diagnosis of the underlying causes. These causes can generally be classified into three categories.

The first cause can be attributed to external subversion that has been going on for the past 18 years. These include obstacles to our saving and development programs, rendering monetary policies ineffective, instigating unwarranted depreciation of the Nakfa, establishing Banks for illicit transactions, weakening local financial institutions, encouraging illegal and cross border trading and the like. These subterfuges fall within the general scheme of external subversion and constitute the first factor that has impacted negatively – with variably intensity –on our economic growth.

The second factor is speculative practices by few players who have exploited and profited from prevailing difficulties and aberrations inculcated by external subversion. These practices have resulted in spiraling price hikes, a rise in the cost of living, deprecation of the Nakfa etc. with deleterious consequences on the country’s economic growth and the well being of the general population. This phenomenon must be accurately identified and appraised, in tandem with the first factor, in order to gauge the damages that it has entailed.

The third and principal factor is the subjective or internal factor that has ensued from the policies and practices of government institutions. Poor institutional performance, starting from budgetary implementation to the lack of proper tax collection have aggravated the problems of inflation and weak currency, thereby providing operating space for the destructive two factors cited above. These are, broadly, the bottlenecks that characterize the prevalent situation.

If we agree these are the main factors, how do we bring about the economic situation to normalcy? Exchange rate is not something to be decided at will. There are standard and determinant parameters that regulate its value or rate at a given point in time. It shouldn’t have gone up or down on speculative grounds or through external ploys. This has to be corrected. By and large, these were the main factors for inflation, or the rise of the cost of consumer goods and the resulting pressure on the living condition of citizens of this country. Irrational price increases on a range of items, from house rents to essential foodstuff, have occurred even when the overall economy was basically healthy. And recently, they began to circulate forged Nakfa currencies that came from abroad. This was prompted by ulterior motives; in order to claim that the economy is in ruins; in order to instigate the perception of the onset of a debilitating crisis.

In this context, the introduction of the new Nakfa currency notes is timely and part and parcel of the structural adjustments that must be taken to strengthen and invigorate the economy. Naturally, the issuance of the new Nakfa currency note will not, in itself, bring about miraculous economic change. Other supportive measures must be taken to bring about the desired changes. Indeed, there are additional measures on monetary policy; there are measures envisaged for monitoring and regulating the exchange rate of the Nakfa; there are parameters in place to closely monitor and regulate the cost of living; there are yardsticks in place to gauge prices of consumer and non-consumer goods. In brief, there are a gamut of policy instruments and contingencies that will be applied in time. As I stressed before, currency notes redemption is not expected to bring about miraculous changes. We have to be cautious and evaluate the impact of the new currency on the economy vis-à-vis the supporting policies for economic restructuring.

Positive signs are already emerging. But we cannot be complacent. We should not expect the external ploys to stop in a short span of time or market speculative practices to end abruptly. We have to be vigilant and be prepared for all eventualities. We have to repair the weakness witnessed on the part of the public institutions. In this regard we have policy measures and contingencies. We need to meticulously evaluate the impact of individual measures; the aggregate result of several measures; their relative and interactive influences; and, above all, whether the desired changes are being achieved as a result of all these measures. But I do not want to draw hasty and premature conclusions at this stage. It is too early – in fact only one month – since the introduction of the currency changes. So we should take our time to gauge the impact. But one thing is certain; distortions and anomalies will not be entertained any more.

The policy measures that are to be taken may not serve the vested interests of those who wanted to exploit prevalent weaknesses to their advantage. But we will not allow the repetition of mistakes that occurred once. Negligence or lax regulatory mechanisms, or good intentioned policies that were misconstrued for ulterior motives will not be repeated. We have to bring about radical changes in the way we do business so as to prevent speculators from manipulating the situation. This cannot, obviously, be done through one single law, resolution or instrument. This will come about in a process. Hence, the issuance of the new Nakfa currency note has multi-layered facets, dimensions and objectives. Its real impact can only be gauged with time.

Q. Mr. President, what developments can we expect in the exchange rate of the Nakfa? And what will be the likely trend for market prices in the period ahead?

President Isaias: What are the conditions in the market now? What is the current exchange rate of the Nakfa against foreign currencies at this point? Personally, I have not been following the fluctuations too closely. The official exchange rate has not changed. Is this fixed exchange rate reasonable? Will it be possible to maintain it that way? A number of views have been floating in the past 10 years. What should be the optimal or realistic exchange rate of the Nakfa? Some would emotionally say that the exchange ratio between Nakfa and the Dollar (US) should be one to one. However, can one realistically maintain the official exchange rate under the conditions of weak regulatory environment by the country’s financial institutions and where the circulation of the currency is abnormal and spiraling out of control? If one pursues a floating exchange rate, what are the yardsticks and parameters that will determine the appreciation or deprecation of currency? And, why? Apart from domestic economy, how would regional economies impact it? How would trade and economic interactions at regional level and beyond be assessed? Is it possible to control the exchange rate, if illegal banks that are beyond the control of national financial institutions have been mushrooming in neighboring countries?

This was the reality in the past when the Nakfa exchange rate spiked to 70, 60 and 50 respectively. How could you stabilize irrational and unlawful exchange rates that were willfully destabilized by speculations and rule of the jungle? And, is this the only issue? How do you handle the official and unofficial exchange rates inside and outside the country? Since the exchange rate is one of the most important manifestations of a country’s relative level of economic and trade relations, investments as well as economic growth, it is clear that it has to be normalized. This has been challenging before for the reasons cited above. But, how is the current situation? Many are saying that the “black market rates have plummeted and the Nakfa has appreciated substantially…” However, is it possible to reach such a conclusion in such a short period; that is barely one month? The apparent depreciation of hard currency could be temporary response to the new realities. As such, it requires careful assessment. The exchange rate is of interest, in different ways, to all Eritreans inside and outside the country. The nationals may need to assist their family members and apart form that to participate in different development undertakings. Above all, balanced exchange rate mostly is for the interest of nationals working in government institutions and who earn their living on the basis of fixed salaries.

The relevance of currency changes and associated monetary policies are ultimately measured on the basis of their beneficial impact on the living standards of families and every citizen of this country. In this respect, we need to carefully work out and strictly adhere to emerging regulations that will govern the newly introduced monetary policy so as to achieve the envisaged goals. We should not, however, resort to hasty collusion. Impact assessments must be done rigorously with patience.
The trends we are talking about are those of a few weeks and let us give ourselves more time and space.

“Not only one, but, two amusing jobs”