“I knew about enjera 14 years before my posting to Eritrea” 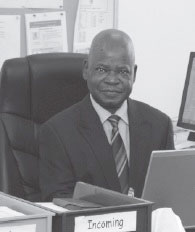 I had the pleasure of talking with Dr. Ousmane Guindo. Being passionate about Agriculture and food security seems to be of significance to him.
He is a Malian who studied and lived part of his life in Canada and who has worked in the Agricultural and Food production sector at policy level for a while now. He started his career in Mexico in the International Wheat and Maize Improvement Center as a research and training officer and then taught at McGill University in Natural Resource and Environmental Economics in Montreal for five years. His professional career in FAO began in 1992 in Haiti and worked in four continents in different faculty competences before becoming the FAO representative in Cameroon in 2008, Afghanistan 2011 prior to coming to Eritrea in 2014.
Be part of our Q&A section, and see what Dr. Ousmane Guindo has to say before as his post to Eritrea comes to an end.

My name is Dr. Ousmane Guindo, I was born in Mali but I have been living in Canada since I was 16 years old. So that is where I completed my education and started my career in Mexico working as a research officer. I have been working since, in different countries and different posts after I joined FAO.

How did you get in touch with knowledge on Eritrea?

Yes, Eritrea, I I’d say it is the only country of which I knew the most before being posted. As I said I worked in different countries and Iraq was one of them, I was posted to Iraq in 2000 and my direct supervisor was Eritrean. And also in Afghanistan I had Eritrean coworkers. So with time I had a general idea of Eritrea.

The Eritreans I worked with in FAO during my career are some of the nicest people I have ever met in my life. These people were so kind  that I was wondering if everyone in that country would only have people like them or if they are the exceptions.
We had developed a brotherhood that is very important to me. We call each other “brother”. These friends have invited me to eat enjera 14 years before I came to Eritrea. Another friend has given me the equipment for making Eritrean coffee – the whole set. So, on the whole, I can say I knew a lot about Eritrea long before I came here. So, I am also accountable on my job in Eritrea to my Eritrean friends.

Yes, generally speaking. Food security is a priority of priorities to the Government of Eritrea and Eritrea is located in the drought zone area of Africa. You see drought frequently, which affects the agricultural productivity. However, national authorities in Eritrea are well aware of this situation and mitigating measures are being taken.

I think that in the countries of Africa we would need more participant youth as they represent the future. And here, I have seen

how during the summer work activities are carried out by the youth which is an important aspect of Eritrea’s achievements in water and soil conservation.

The youth is the driving force. We have to work for our countries. Africa has to work for Africa. We have a responsibility to build Africa. Someone else will not do it for us. Africa will not build itself same as the other continents did not build themselves.
It is the people that built it. We have to set objectives and work hard to achieve them. It is not easy task and requires sacrifices. But if other continents can do it, certainly we too can do it. However if we are to get there, then we have to be proud of ourselves and of our countries first. Then, we can deliver on improving the lives of our children and grandchildren and great grandchildren.

Eritrea in comparison to African countries

Let me say that, in the case of Eritrea… taking the MDGs 4, 5 and 6 as an example: Eritrea is one of the few countries that met them. Eritrea is a new country in political terms while other African countries had their independence in1960s, so it just not appropriate to compare a country that had small amount of time after independence and many martyrs in the struggle of independence with the border issue still on hold made which made you lose many youth that could have been the drive of the country’s development.

I would say… Policy and programs of various ministries are being aligned in supporting small farmers. Like there is this extension package programme of the Ministry of Agriculture whereby they want to assure that each farmer has the means to food security and also generate some income.

The government’s policy is not only in papers, it is being implemented so knowing about it is one way.
The policies are to support small farmers, for instance there is a project in support with the Ministry of Agriculture bee keeping basically through the country.

What we plan to do is to import less by producing more bee hives. And also in terms of trainings how to produce quality honey. And all is directed to small farmers. Another project with the Ministry of Agriculture is on date farming where by diseases free seedlings date will be distributed to small farmers in the Southern and Northern Red Sea Region. These programs with the support of various ministries will ensure food security and produce enough to export, even.

Sense of cooperation in Eritrea

I really appreciated my posting to Eritrea even though it has been quite a short time. I did assume the responsibility of the organizations and also like I said since I have many Eritrean friend I have to report to them that I am doing my very best. Because they expect me to deliver in their country.

Wish for the Eritrean people

I wish them the very best. Each country has its own problems and challenges and some of the challenges need a long time to overcome. They say Rome was not built in one day. It takes time to make sustainable developments.

At the end of your post, what do you plan to do next?

I plan to farm in Mali.