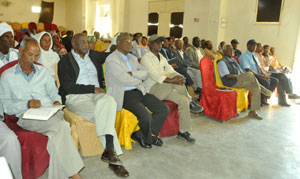 The Anseba region assembly conducted its 18th regular meeting on 26th of January in Keren.

The administrator of the region, Mr. Ali Mahmud called on the members of the assembly to serve their citizens with commitment and dedication. He also indicated that the action plan for the year 2016 put a strong focus on the development of financial capacity of the region, the construction of water reservoirs, and the expansion of farming activities as well as preserving the values of the Front.

The administrator further called on members to work for the increased awareness of the public on harmful practices, on conflict resolutions as well as coordinate the implementation of development programs.

Members of the assembly conducted extensive discussion on land allocation, measures to control illegal trade, transportation shortcomings and elevated tariffs among others.