Beyond the Myths: Eritrean Women 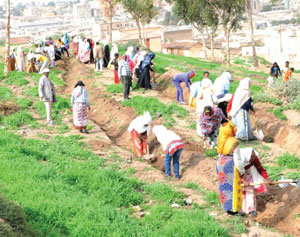 Recently, a fictitious report about polygamy in Eritrea becoming national policy was widely circulated across various international media outlets. While the story was a complete and utter hoax, littered with innumerable fabrications and falsehoods – easily revealed by simple, perfunctory background research – its broad dissemination poignantly encapsulates how general coverage of and journalistic practice toward Eritrea are so problematic.

The only things missing from the entire fiasco – beyond rationality and critical thinking – were the stigmatized, clichéd imagery and lazy descriptions about “lions in the backyard” and natives brandishing spears while adorned with traditional loincloths and war paint. Effectively, the story is a relic of a bygone era, characterized by a different paradigm where, for outsiders, Africa “proper,” to utilize Hegel’s moniker, was a land of an “Unhistorical, Undeveloped Spirit,” exhibiting “…man in his completely wild and untamed state” (91; 93).

Furthermore, the story was particularly troubling due to its highly denigrating portrayal of Eritrean institutions and culture and its extremely degrading reflection of Eritrean women, who are key components of Eritrean families, communities, and society. Much of the risible response to the story emanates from the fact that it regurgitated outdated, paternalistic, and grossly inaccurate images and depictions of “Third World” women (e.g. being inefficacious, poor, residing in hovels, having too many children, illiterate, ignorant, tradition-bound, victimized, and either dependent on a man for survival or impoverished because they lack one). Images are powerful and potent; when they are replayed and repeated incessantly and uncritically, they strengthen harmful stereotypes and legitimate long-standing inequalities. The longest African independence war of the 1900s, and amongst the most destructive, Eritrea’s three decades long struggle was about far more than just political emancipation. Rather, it sought to usher in a complete and radical socio-economic and cultural transformation of society. Accordingly, an important dimension of the struggle – giving special attention to egalitarian, popular democratic principles and ideals – was a particular focus on women’s and gender-related issues. No longer would women be viewed narrowly as secondary, subordinate figures within society; instead, they would stand proudly as full equals to men. Embodying the notion of equality through struggle, valiant Eritrean women served honorably, fought bravely, and sacrificed greatly alongside men in the labyrinth-like trenches, on the battlefields, and across the front lines. Ultimately, women would prove absolutely critical to the eventual achievement of independence. In a similar vein, since independence Eritrean women have been key drivers of the nation’s pursuit of a broad range of national development objectives.

Globally, women’s economic empowerment is increasingly recognized as a crucial factor in promoting gender equality. Economically strengthening women is not only a fundamental moral imperative, in terms of encouraging the realization of inherent, inalienable women’s and human rights, it also serves to stimulate and undergird economic growth and prosperity. A plethora of examples and case studies abound – from Bangladesh to Bolivia to South Korea and Kerala, amongst others – revealing that when families, governments, the business sector, communities, and societies invest in girls and women, and work to eliminate inequalities, developing countries are less likely to be plagued by destitution and poverty and they become better positioned to thrive within highly competitive global markets. Accordingly, it is encouraging that Eritrean women are increasingly being integrated into many sectors of the economy, seeing them perform vital, productive roles and tangibly impacting the country’s general development and progress. Women now constitute a large percentage of the workforce, and they remain very active in both the manufacturing and informal sectors. Moreover, through steady improvements and investment in education and human capital, and greater access to opportunities, they are gradually transitioning to high-skilled sectors. Around the world, it has long been the rule that women are inferior, with little ability to contribute substantively to society. In Eritrea, an old, backwards proverb states that “like there is no donkey with horns, there is no woman with brains.” However, from the days of the long struggle and since independence, Eritrea’s resilient women have shattered such outdated, patriarchal rules and notions through their wholehearted participation, struggle, contributions, and sacrifices. Today, Eritrean women are active within all areas of society and they contribute in many diverse ways, ultimately playing a crucial, positive role in the country’s socio-economic progress and overall development.

Notably, Eritrean women are also making numerous and significant contributions to the country’s environment. Environmental degradation is a critical problem in Eritrea, dating back to the country’s period under colonialism and foreign administration. Remarkably, due to universal land systems, agricultural expansion, and deforestation policies successively implemented by the Italians, British, and Ethiopians, Eritrea’s national forest cover decreased from over 30% in the late 1800s to a meager 5% of  the country by 1960 (Fiore 1952; MoA 1994; Renato 1911). Other influential factors for degradation include the long, destructive war of independence, harsh climatic conditions, and various population practices (e.g. the mass utilization of wood for fuel). Today, a range of projects across the country seek to address degradation through community participation in soil and water conservation activities. According to a recent article by the United Nations Development Programme (UNDP), the National Union of Eritrean Women (NUEW), an organization which has worked to propel social transformation in Eritrea and build a conducive environment for enabling gender equality and the empowerment of women, has led and implemented several effective community projects. Serving as an apt reminder of the central role of women within Eritrean society, the NUEW-led projects help to encourage equality, significantly contribute to the conservation of biodiversity, and strongly promote sustainable livelihoods.

Abrehet Issac (59) is passionate about environment conservation. She led 5 groups of women who undertook a cumbersome task of digging, ferrying stones and planting trees at the Mai Nefhi catchment area. “The ground was very hard and our hands were bleeding, but we were committed to finishing the work that we had begun,” she said. As the leader, Abrehet coordinated the activities undertaken by the groups and found solutions for those encountering problems. “Sometimes I just made jokes to cheer them up. They still want to come even though we don’t have any ongoing work at the moment!” She exclaimed. They call the place “Taba Hamadae”, loosely translated it means the hill where women meet.

Two years ago, a group of 120 women from two villages, Abarda and Kutmowlie in the Galanefhi sub- region, Central region, started an ambitious environment conservation project that entailed planting trees and constructing check dams on 100 hectares of land that form the Mai Nefhi catchment area. During the implementation of the project, they formed committees that were responsible for ensuring that all the planned activities were implemented.

According to Tiblez Weldgherima, the administrator of Abarda and Kutmowlie villages, it is the residents of Abarda village that came up with the conservation idea as they were looking for ways to improve their livelihoods. “As an administrator, I had already mobilized the women and organized ourselves into groups” she said. Tiblez is an ex fighter from Eritrea’s armed struggle for independence. “I have witnessed the death of my comrades. Their blood was not shed in vain, it is what drives me,” she said. Since then she has nurtured the commitment to see the prosperity of the future generations in Eritrea. “The armed struggle for independence has taught many of us to be resilient, the women are committed to the initiative. I am still a soldier, fighting for the protection of the environment,” she added.

The project is implemented by one of UNDP’s implementing partners, the National Union of Eritrean Women (NUEW) and is funded by UNDP-GEF Small Grants Programme and co-financed by the communities and government ministries. There is a development committee comprising of representatives from the Ministry of Agriculture (MoA), NUEW, sub region and village administration who supervise the soil and water conservation activities as per MoA guidelines.So far, soil and water conservation work has been undertaken on 38 hectares of land through community participation. They have also constructed 152 kilometers of terraces, built 1500m3 of check dams and planted 39,540 tree seedlings of eucalyptus, cactus and “Awhi” (Cordia Africana). In future, the community of about 720 households, will be able to harvest the trees and sell as firewood for extra income or poles for house construction. They can also harvest the cactus fruit ‘beles’ during the rainy season (May to September), to supplement household food and income, especially for the rural population.The project is anticipated to improve the livelihoods of about 2,500 people, in addition to decreasing siltation of Mai Nefhi Dam.

“Eritrean mothers are my rolemodels”