“Eritrean mothers are my rolemodels” 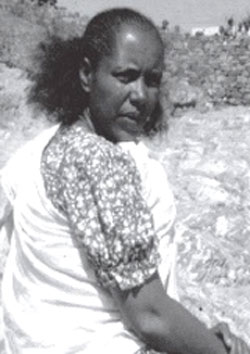 She gives life to her characters, and so when she gets in character she makes the spectators forget about her. This is why, even after many years, she maintains utmost professionalism and her talents remain undeniable. Today, we are happy to profile actress Wudasse GebreNigus.

Let’s start with some background…when and how did you join the armed struggle?

I was born in 1968, and around the time I turned 12, I started developing some feelings of nationalism I can’t even explain.
So my friend Abrehet Mengis, who would later be martyred, and I left our village to join the army. We were too young and well aware that the freedom fighters (tegadelti) would not accept us.

You know, because many young people were running away from home to join the armed struggle, the tegadelti had this quote, almost like a formula that they would recite to every young person before sending them back, “eat a quintal of sorghum and then come back to us.”

Anyways, knowing this, my friend and I decided to go to the tegadelti stationed far from our village. That way they would not be able to tell us to go back home; the further we went the better! So we did.
Our parents came to take us back and we refused. That is how we joined the army. Of course this does not mean that we started shooting in the battlefield right away…we were first put to school, art school in my case, and military training later when we got a bit older.

I was given a song called Nakfa for trials and I did really well; ultimately, I was encouraged to do more.

You sang about Nakfa before seeing it, how did you feel when you finally got there?

Nakfa is a historical place. It is divine. The way I imagined it before I joined the combat troops and after was very similar. It is a place of heroism, and I have dear memories that I won’t ever fail to recall.

Tell us about acting

I don’t sing anymore. I totally shifted to acting and I think I like it, the public has accepted me as an actress. I started acting much later…ten years after independence. But I did act in a drama before; it was entitled Arsema and it illustrated the difference between the poor and rich. My character was the daughter of a rich household.
The drama was written and directed by Selomon Gebrihiwet, whom I ended up marrying.

(Author’s note: in Tigrignya, gedli is used to refer to the armed struggle)

Sweet! Very pure hearted, yet extremely hard. You know, we were almost never together and love was not our priority. We had an aim that we all believed in and decided was worth our lives. So it was not an ordinary love story; yet again, it gave flavour to the togetherness of the E.P.L.F soldiers.

It took you a long time to get back into acting, nearly 10 years. Is there a particular reason why?

At the time, computers were not as widespread as they are now. Since I knew my way around the computer, I wanted to do more office-related work. However, art is not something you decide to just leave, especially if you completely dedicate your heart and soul, so I eventually got back to doing what I do best.

Moreover, during my 10 years long break, I completed my studies and also had my two beautiful children! They are both so good at school.

After that, I immediately decided to work hard to be more skilled and have more roles to play. Therefore my first drama after the long break I took was Visa; I had the role of a determined mother of a troublesome, law-breaking son. What more can I say? After that, I never wanted to stop. And just to make things better, I recently got into writing.

Do you find rehearsing hard between children and family?

Sometimes, but it is my job so I do my best to keep in track. I rehearse while doing housework, while cooking, and often times my children help me rehearse by reciting other characters’ parts.

You have been in several films, how many?

Many. 45 so far. Small and big roles, stage dramas, full length and miniseries… nearly 50, all in all.

I love and take pride in most of them, but there is one that I don’t particularly like. Nevertheless, because I love what I do, I did my best to portray my character. An actor or actress needs to be, for the moment, his or her character, and I think I did that. The movie received positive reviews and made me happy, but it was a bit less for me.

What characters do you feel comfortable portraying?

A mother figure, because there is so much an actress can do in order to portray a mother. A mother is so loving and selfless, but at the same time is very strong and unforgiving to anyone who tries to hurt her cherished ones.

Do you have a role model?

Yes, actually many..it’s countless. Eritrean mothers are my role models, not only in acting but in every facet of life.

You and other actors.

We have a great relationship. It is an Eritrean trait to help and advise each other. Had it been any different I wouldn’t have been able to perform in so many works.

As a senior with many years of experience, what are your thoughts on timely film production?

It is okay, although I would love to see an institute of arts that combines and strengthens today’s Eritrean artistic production.

Anything for the Eritrean Silver Jubilee?

Most probably… wait for me!

Beyond the Myths: Eritrean Women