Of Bicycles, Assassinations and Fame 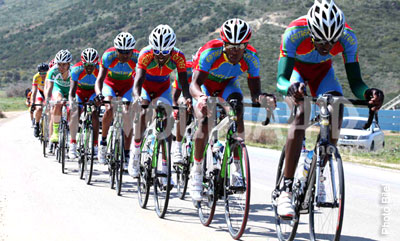 Bicycles have a long history in Eritrea, dating back to colonialism and receiving renewed interest in the wake of Daniel Teklehaimanot and Merhawi Kudus’s heroics at the 2015 Tour de France.

Another layer of the history of bicycles in Eritrea, much lesser known however, is the role they played during the protracted Eritrean war of independence.

The mid-1970s were the golden age of Eritrea’s underground resistance movement, witnessing large segments of Eritrean society, from school children to bar owners and bank managers, playing their part.
Tapping into that public support was crucial for the Eritrean resistance movement, and a clandestine spy group was formed, known as the Fedayeen.

The Fedayeen were mobile units of fighters who would sneak into Asmara, take lodgings with sympathizers, work undercover for several months, and then return to the front. The Fedayeen were organized in small, interlinking cells, each with its own code name. In theory, each member knew only two other cell members. According to the theory, should one member be captured by the Ethiopians and crack under torture, he would only be able to betray two other people. Ultimately, protected from informers and the indiscreet alike, the network itself would live on.

The Fedayeen were divided into three sections; the political, economic, and military wing. The military wing was responsible for assassinations, sabotage operations, monitoring Ethiopian troop movements, and transferring information -smuggled in hand-written notes – across checkpoints at the city’s limits and out to rebel lines.
Additionally, the Fedayeen were responsible for the Sembel prison break and bank robberies, the latter which helped keep the armed struggle in business.

For assassinations, the Fedayeen’s high-profile targets were Ethiopian army commanders, as well as air force or navy members, policemen, and spies who pretended to be civilians. The Fedayeen quietly gathered a list of these men, many of which were usually spotted surreptitiously entering or leaving Ethiopian detention centers or overheard boasting about their exploits in bars. Little boys noted down registration plates of drivers pulling up. Regardless of how many bodyguards they had or whatever deceptive maneuvers they employed (e.g. changing cars or altering daily routines), the Fedayeen’s targets could hardly ever feel completely safe.

The Fedayeen’s tactics were dictated by Asmara’s confines. The city was tiny, capable of being crossed by foot in an hour, and about a quarter of the population was Ethiopian, and therefore not to be trusted. How to stage ambushes and then seemingly vanish into thin air, within one of the most parochial capitals in Africa, where everyone seemed to know everyone else’s business? Cars were unfeasible; they were too visible and since few Eritreans could afford to own them, they were ill-suited for gateways. Consequently, the Fedayeen fine-tuned a tactic that would have seemed comic, had it not proven to be so grimly effective: the bicycle assassination squad.

Half of the assassinations carried out by the Fedayeen were successfully staged by the so-called bicycle squads. The Ethiopian authorities reacted by first banning bicycles from the main thoroughfares that sliced across the city – a ban remaining in force today (although today it is to reduce traffic congestion) – and then outlawing bicycles altogether. I remember an article I once read on Hadas Eritra’s “Hanti Alem” that Ethiopian troops, who began to learn how to ride bicycles, ended up flying off cliffs and being admitted to hospitals.

The Fedayeen’s technique was last used against a young drug pusher trying to hook clean-living young Eritreans onto drugs. Considered very dangerous, he had lots of money and could regularly be found hanging around young men and ladies. Two youth were placed on look out; casually loitering with their bicycles in their hands, they monitored the prospective victim, sitting in his car. Two members of the Fedayeen strolled up and shot him dead. Seizing the bicycles held at the ready, the Fedayeen bicycled furiously off into distance as if it was the final stage of the Tour de France.

Fast forward 50 years and Merhawi Kudus is taking on the likes of Mark Cavendish and Andri Grieple on the final stage of the Tour de France Champs-Élysées stage. Prior to that final stage, Daniel Teklehaymanot, against all odds, made history in winning the Polka dot jersey on stage 6 of the 2015 Tour De France. He would retain it for an impressive four consecutive stages, ultimately being dubbed “king of the mountains.” Remarkably, the very instrument that was used as a getaway in the 1970s clandestine operations is now used to make Eritrea’s name in the world of cycling – boy are we doing a terrific job at it.

Since the introduction of bicycle to Eritrea in the late 1800s by the Italian forces, many homes welcomed it as simple means of transport which greatly eased their daily burdens. Villages located near comparatively larger cities were, and have been, great beneficiaries of the development of such a bicycling culture. Highly fostered by this culture, in recent years Eritrea’s contestants within international cycling competitions have performed commendably and received many plaudits. Cyclists such as Meron Teshome and Natnael Berhane, as well as a wave of new, promising stars, including Sham Kiflemariam, seem to take full advantage of the path laid for them by compatriots Daniel Teklehaimanot and Merhawi Kudus.

Reflecting on bicycles in Eritrea, it is remarkable to consider their path from tools to support freedom to being instruments of international sporting success.