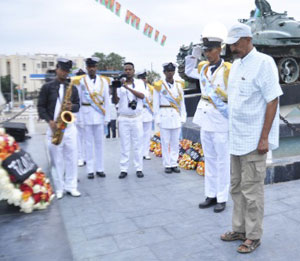 The commemoration of the 26th anniversary of Operation Fenkil, which was held from February 12th-14th under the theme, “Operation Fenkil 2016: On the Eve of the Silver Jubilee of Independence Day Celebration” was conducted with great enthusiasm.

Asmara, 17 February 2016 – The commemoration of the 26th anniversary of Operation Fenkil, which was held from February 12th-14th under the theme, “Operation Fenkil 2016: On the Eve of the Silver Jubilee of Independence Day Celebration” was conducted with great enthusiasm.

Present on the occasion were Ministers, regional Administrators, Army Commanders, senior government and PFDJ officials, as well as participants of the commemorative event. Also, President Isaias pay a visit to the Free zone area, where he was given briefings by respective officials.

On the official commemorative event attended by high level government and PFDJ officials, military commanders, and numerous pilgrims and local inhabitants, the Mayor of the port city of Massawa, Mr. Kidane Weldesilasie, reflected on the significance of the event, which is being held on the eve of the country’s Silver Jubilee Independence Day celebrations.

Noting that Operation Fenkil played a crucial role in paving the way for the total liberation of Eritrea, the General Director of Culture and Artifacts in the Northern Red Sea region and Chairman of the Holiday’s Coordinating Committee, Mr. Suraj Haj, also indicated that the commemoration coincides with the Independence torch tour, which is currently moving across the nation and adding further emphasis to celebrations.

The event was highlighted by various military parades, exhibitions, cultural shows, and a visit to the Patriot’s Cemetery.

Participants at the celebration expressed their joy and also remarked that the commemoration is important in sharing history with the younger generation.

Mr. Osman Hasebela, a Sudanese visitor, said that it gave him great pride to attend the Fenkil commemoration and that the vibrant celebrations of Eritrean public holidays are a testament to the unity and harmony of nationals.

“You don’t know about the Asmara toad ?!”