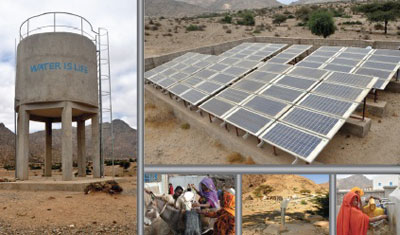 In July 2010, the United Nations General Assembly (UNGA) adopted a resolution (A/RES/64/292) which “recognized the right to safe and clean drinking water and sanitation as a human right that is essential for the full enjoyment of life and all human rights.” According to the United Nations (UN), water is a fundamental component of development and it is vital for socio-economic progress, the health, sustainability, and vitality of ecosystems, and for human survival itself. Additionally, water is crucial in reducing the global burden of a range of diseases and it is significant in improving the health, welfare and productivity of populations. Moreover, it is central to the production and preservation of a broad array of benefits and services for populations, while it also remains essential to adaptation to climate change, serving as an important link between the climate system, human society and the environment.

During a speech she gave last year on the UN’s new Sustainable Development Goals (SDGs), Helen Clark thoroughly detailed the numerous mechanisms through which water is interrelated to global poverty eradication and sustainable development. First, water is directly linked to sanitation and health. Water-related illnesses disproportionately affect disadvantaged, vulnerable, and marginalized populations, especially poor women and children. Globally, it is estimated that approximately 2,000 children under the age of five die every single day from diarrheal diseases. Frustratingly, the vast majority of these deaths are relatively easily preventable, often being connected to problems with and inadequate access to water, sanitation, and hygiene. As well, illnesses and diseases arising from a lack of water and sanitation also lead to considerable losses in productivity, burden individuals, families, communities, and healthcare systems with massive costs, and ultimately stunt national economies.

Articulating the close link between water and the economy, Sanctuary, Tropp, and Berntell of the Stockholm International Water Institute (SIWI) find that, amongst numerous other important developmental benefits, improved access to basic water and sanitation services and good management of water resources brings “more certainty and efficiency in productivity across economic sectors,” and helps lead to “immediate and long-term economic, social and environmental benefits.” As well, according to a World Health Organization (WHO) study on meeting the UN Millennium Development Goals (MDGs), the economic loss from the inadequate access to or delivery of water and sanitation is approximately 1.5 % of gross domestic product (GDP).

Women’s economic empowerment is increasingly recognized as amongst the most significant factors in promoting gender equality. However, economically strengthening women is not only a fundamental moral imperative, in terms of encouraging the realization of inherent, inalienable women’s and human rights, it also serves to stimulate economic growth and prosperity, ultimately tangibly improving societies. For example, in the 1970s, as Norwegian women entered the labor force en masse, overall productivity greatly improved, while the country’s tax base nearly doubled, helping to undergird a generous, universal welfare state that supports all segments of Norwegian society.

Overall, the right to water is a fundamental human right, and the lack of access to water leads to a broad array of far-reaching negative economic and social impacts, including general poor health, greater mortality, lower school enrolments and decreased educational achievement, and greater gender disparities.

For Eritrea, a low-income, developing country within the fractious Horn of Africa, water has long been a significant concern. Located within the arid and semi-arid Sahelian region and characterized by harsh, challenging climatic conditions, Eritrea is not endowed with considerable water resources.

It has two perennial river systems, the Setit River and the Gash Barka system, while all other rivers in the country are seasonal, only carrying water after rainfall. However, Eritrea’s rainfall patterns are extremely erratic. Average annual rainfall is only approximately 380 mm, and rainfall is usually torrential, being high in intensity and short in duration, thus raising the possibility of unpredictable and destructive floods. Moreover, rainfall is highly variable from year to year, with droughts occurring every three to five years. Consequently, most rivers in Eritrea remain dry throughout most of the year. Furthermore, Eritrea possesses limited sources of fresh surface water, and while groundwater can be tapped, it may be small in quantity and poor in quality (IFAD n.d.).

In this context, access to water has been a central focus of Eritrea’s national developmental objectives. In recent years, access to clean drinking water in rural and urban communities in Eritrea has risen to a total of 85%, dramatically higher than the meager figure at the onset of independence (Ministry of Land, Water and Environment; Pose and Samuels 2011). Much of the country’s improvement is down to considerable investments, cooperative projects and integrated approaches that cut across ministries and sectors, a simultaneous focus on both rural and urban populations, and broad community involvement.

Moving forward, it is imperative that Eritrea continue to place water at the centre of its development policy. This will necessitate renewed firm political will and commitment, as well as the cooperation and support of the international community, development partners, and local communities and groups. Ultimately, focus and investment in water (and related sectors) will help to radically transform the country’s economy, encourage social equity, be beneficial for the local environment, and promote human development.

Notably, the International Committee of the Red Cross (ICRC), a humanitarian institution based in Geneva, Switzerland and a three-time Nobel Prize Laureate, recently featured an article highlighting a grassroots-level water project in Aytera, a small border village in Eritrea. Significantly, the project helps provide vital water and relief to the village, while also serving as an apt reminder of the tangible developmental outcomes emanating from the access to water.

Eritrea: A solar powered well brings water and relief
International Committee of the Red Cross (ICRC) and featured on https://www.icrc.org

Eritreans living in the border village of Aytera know how hard life can be. During the 1998–2000 war between Ethiopia and Eritrea most fled to makeshift camps. Since the conflict ended, they have been rebuilding their lives from the ashes of war.
Aytera’s 600 residents depend heavily on their crops and farm animals to survive. This is a test in itself, but the biggest challenge to life in this region – known as Gash Barka, situated in the southwest of the country – is water. For two years, after Aytera’s water pump broke, residents had to walk four kilometres to a hand-dug well to fetch water.

The children from other villages who attend Aytera’s school always had to scramble to find something to drink. “It was very sad to see children move from house to house in search of water,” said Nebiat Gebreweld, a mother of six. Once the well was reached – a journey of two to three hours – people had to wait in line to haul water up from a depth of 12 metres before trudging back home with their heavy loads.

Now, thanks to a solar water supply system installed by the ICRC in June 2015, the water situation is much improved. A fountain built in the middle of the village gives residents easy access to clean water.

The village has established a three-member water committee to oversee the upkeep of the solar-powered well. Residents each pay a small fee to fill up a jerrycan of water after waiting no more than a couple of minutes to access one of the well’s ten faucets.

Gathering the water needed for daily life is often a chore that falls to women and girls. Fiyori Maekele, a seventh grade schoolgirl, said: “The solar water project is very important for girls and mothers as it only takes us a few minutes to fetch water, so I now have more time to spend on chores and school work.”

The ICRC has been working in Eritrea since the outbreak of the border conflict, helping vulnerable people and the victims of violence. Its most recent projects include the installation of about 80 solar water supply systems, construction of ponds for livestock, distribution of foot-pumps for small-scale irrigation projects, animal vaccination services, and assisting Ethiopians who wish to be repatriated.

Training for Youth in Logo-Anseba