“You don’t know about the Asmara toad ?!” 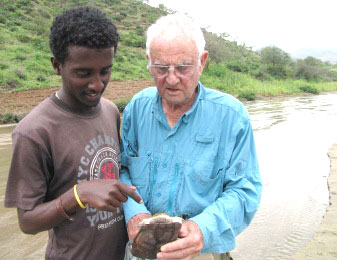 Dr. Theodore J. Papefuss has been a Research Scientist the University of California since 1980, specializing in the study of reptile and amphib¬ians. He is particularly interested in the conservation of these animals and biodiversity. Dr. Papefuss recently visited Eritrea for three weeks, and right before he left I had the opportunity to interview him. We had a wonderful discussion and I went home with so much knowledge about several of Eritrea’s unique animals.

Dr. Theodore, tell us about yourself.

Call me Ted, please. I am a research scientist at the University of California, and I have worked there for over 35 years. My specialty is the study of amphibians and reptiles.

Our university has the biggest museum of its kind, the Museum of Vertebrate Zoology.

How did it start? I mean your entry into the profession.

My friend earlier on in grammar school, his father specialized in the same profession, and so I basically wanted to be like him. You know, the same man, much later on, was my advisor while I was doing research for my Ph.D. Subsequently, I’ve worked with him for so many years at the University of California.

And I have long been interested in Africa, probably back to when I was 19 years old.

When I was an early college student, I lived in Ghana for six month. Then 10 years ago, I began to have a growing and immense interest in the species of East Africa, many who are related to those of the Arabian Peninsula.

You know, something like 40 million years ago, the land masses of Arabia and Africa were actually physically connected together.

Later, when they got separated, some of the species were also segregated. I did some research in Arabia and felt the need to expand my inquiry to the Horn of Africa.

So, this is why I had to return to Africa. And particularly your country, Eritrea.

Eritrea is rich in biodiversity of small animals. Many years ago, a biologist was here to conduct some research, mostly in Massawa and a bit in Asmara. Remarkably, they found some new species. This was one of the factors that pushed me to come and do research of my own.

When I asked for a permission to come and work in your country, I was fortunate to find some amazing people, including Fitsum, the director of wildlife in your country. He arranged so many things with the Ministry of Agriculture… and here I am. I’ve been here for almost three weeks and everything has been beyond fantastic.

One of our goals was to study some of the unusual species. In 1827, a freshwater turtle and a very unusual type of lizard were discovered in the area towards Massawa. And there is something else which is unique to Eritrea…do you know of the ‘Asmara

You don’t know about the ‘Asmara toad’?!

This specific species name is ‘Asmari’ and it was found in 1982, 34 years ago. But nobody knows about it.

Do you know that the ‘Asmara toad’ is the only one animal named after a city?

It could be a national treasure…

In Green Island, Massawa, I met three young boys, all college students from Asmara. One was in the College of Business, and I don’t remember the others. But they were there just having a good time and enjoying themselves, and they were also really interested in what I was doing. So we talked a lot and they were immersed in what I was telling them. They told me that they would tell all of their friends about these tiny species which exist in abundance in Eritrea and have a vital role in biodiversity and the food chain.

You do the same now, you need tell your friends! Well, then again you will write about it, won’t you? I wish for people to hear and know about such things. It is really important.

Mostly people think of elephants and leopards, because Eritrea is in Africa. But you even have this small animal that is named after your city! They exist almost everywhere around you because they are well-suited for wet areas.
One of the many pleasures of being in your country was the fact that I found so many species…we will conduct further DNA studies. And I have even found a toad that I don’t really know what it is.

Also, in Massawa I found gecko lizards that come out at night. They caught my interest because they were first found by the same person that described the sweet water turtle that I talked about earlier, found in 1827.

These small animals, like I said, are very important and they should be protected. But I also noticed that your country has taken, for now a long time, some serious steps in the conservation of nature. Wildlife, greenery, and forestry are well preserved…I now know that your forestry was devastated because of the war, but national enclosures and similar approaches will certainly bring you great outcomes. I have also seen that you don’t use plastic bags! That is beautiful. Where I come from, they only just recently banned the use of plastic bags, but you have already done so for many years. And it is more of a tradition than a rule for you.

Aside from the toads and lizards, what I appreciated most was your culture and tradition. I was welcomed in ways that I will never forget. Everyone is friendly, kind, generous, and so eager to learn and know.

[Before coming to Eritrea] I was misinformed. I am glad I came to see for myself. Outside we hear that Eritrea is a closed country. But in reality it is a place of vibrant people. I also used to believe that you had no contact with the outside world, but I noticed that almost every house has a satellite dish panel and BBC is on almost everywhere.

Author’s note: after the formal interview, I had a pleasant chat with Ted. He told me that he enjoyed “mies,” a traditional Eritrean liquor. Ted also expressed astonishment and disbelief at seeing dancers doing the traditional Tigrinya dance routine – in which they move with elegant, rapid steps while balancing long-necked bottles of “areki” atop their heads.