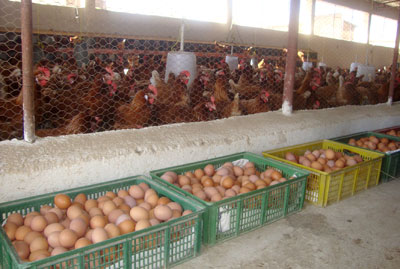 Traditionally, the price of eggs (and poultry) has often been closely associated with the seasons, as local production patterns by peasants and farmers was largely based on climate.
However, over the past several months, the price of poultry products, especially eggs, has witnessed a series of dramatic fluctuations.

For example, within the span of the first two months of 2016, the price of an egg at shops and groceries rose from 7-8 Nakfa to 12 Nakfa. However, the surge was soon followed by an abrupt drop in the price of eggs and poultry.

Currently, the price of eggs is from 4-6.50 Nakfa. Remarkably, one can find eggs being sold almost everywhere – on street corners, within residential areas, and on the back of open trucks and upon horse carts. While in the past the price of other consumer goods generally moved up, the price of eggs (and poultry) had largely been accepted as fixed. So what gives?
Most observers, understandably, would point to the government’s recent monetary policy readjustments to control currency circulation, and the expectation of further fiscal changes to come.

These, however, are not the main factors. Instead, the principal reasons are the simultaneous entry of multiple modern poultry farms into the market and the import of eggs from neighboring countries. Regarding the former, the Ministry of Agriculture (MoA) has provided medicines and feed to poultry farms, while also running its own farm and directly supplying products into the market.

For several years, the MoA has distributed chicks to farmers to ensure national food security and support sustainable livelihoods. In some circumstances, it also imported expensive farm animals and redistributed to needy local farmers for free.

Such initiatives have been particularly apparent in terms of poultry; the MoA has imported hundreds of thousands of chicks from Europe and distributed them across the country. Consequently, the lives of many families have tangibly improved either due to the direct consumption of fresh, healthy, nutritious food or through the trading of their products on the market to meeting their immediate needs.

However, these initiatives have often been plagued by a shortage of medicine and feed. Animal breeds imported from Europe were adapted to different environments. When they reached Eritrea, their survival rates were frequently much lower in Europe. As well, there were considerable efforts required for planned feeding and regular veterinary follow-ups to maintain production.
Accordingly, the MoA has provided agricultural medicines for farmers, while leaving the issue of food to individual farmers. Thus, although the government imports the fundamental elements that need to be mixed with other cereal products for poultry food, it is the farmers themselves that should procure the staple foods, including sorghum and corn.

In addition to challenges related to feed, many chicks may die during the transition into Eritrea or once they arrive, since they are

bred to survive in specific environments, and they demand a lot of care and attention (e.g. specifically designed processed food, vaccinations, and regular medical follow-ups).

All this may understandably raises the question of why can’t we hatch chicks locally? According to experts at Mai Nefhi’s modern poultry farm – distinguished as one of only three modern poultry farms in Africa (the two others are in Egypt and South Africa) – hatching chicks is much more affordable than importing. Specifically, it can cost up to 40 Nakfa to import one chick, while local poultry farms can hatch and provide one chick to farmers for less than 20 Nakfa.

Importantly, the farm company has built a hatchery, equipped with the latest technology to the tune of several million Nakfa, which may be fully operational in the near future.

Ultimately, the aforementioned initiatives by the MoA, as well as viable modern poultry farms are effective ways to provide a steady supply of poultry products at affordable prices.

For Better or Worse…In Sickness and In Health…For Poorer and Poorer! (Richer??)