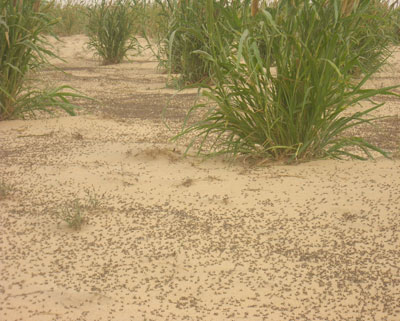 Locusts are an age-old problem that have plagued humans for thousands of years. A small swarm can wreak havoc and completely destroy a farmer’s entire livelihood during a single morning, while larger swarm invasions can damage and reduce a country or region’s food security for years to come.

In many countries, it is not uncommon for households to fall into debt during plagues, subsequently causing them to pull their children from school in order to help cope with the increased burden. The desert locust is considered to be the most dangerous of all migratory pests in the world.

Eritrea is located in areas where disease and outbreak related to locusts and pests are common. Specifically, the country is a breeding area for the desert locust, army worm, and qualea qualea (grain eating bird). Crop and pasture loss caused by these pests pose considerable consequences, including suffering, food shortages, and malnutrition. Accordingly, the Eritrean government has prioritized controlling pest diseases and outbreaks. With pests also not recognizing borders, the country has also attempted to eliminate their regional spread.

Requiring information, intelligence, and rapid decisions, combatting locusts has frequently been likened to a small war. The Eritrean approach, however, is largely based on prevention, involving, inter alia, advanced planning, surveillance, immediate intervention, and the provision of staff training. Simply, the aim of the programme is minimizing the risk that desert locust plagues pose for national food security.

The Ministry of Agriculture (MoA) attentiveness has been a key facet of the country’s successful desert locust control strategies. Of note, the MoA has employed intensive and frequent surveys, implemented pragmatic actions, and developed solid and efficient contingency plans.

Regular surveys are conducted across the country according to season. In the winter breeding season (September-March), surveys are conducted within the Coastal Red Sea area (Eastern Lowlands), and in the summer (June-September), they are conducted along the western regions, from Kerkebet and Asmat in the northwest to Omhajer/ Tesseney and other areas in the southwest. Tasked with a variety of responsibilities, survey teams (consisting of experts and scout farmers) are equipped with several vehicles, GPS systems, and special eLocust3 devices.

New technologies have considerably enhanced the ability of teams to monitor habitat conditions and detect the first signs of locusts, thus improving response times and decreasing risks of plagues.

The Migratory Pest and Desert Locust control Unit of the MOA has been employing the eLocust3 devices, which are connected to a vehicle antenna that transmits field data (e.g. locust situation, stage and behavior, vegetation density and types, rainfall and soil humidity etc) instantly.

According to a recent country report on desert locusts, Mr. Keith Cressman, Senior Desert Locust Information and Forecasting Officer (DLIS) at the FAO-HQ in Rome, said that, “The effective management and use of the eLocust3 devices correctly by Eritrea was commendable and should be an example for other countries to follow.” He added, “This is really a tremendous achievement for Eritrea and leads to good monitoring and early warning not only for the country but also for the region.”

Mr. Tedros Sium, Head of Migratory Pests and Desert Locust Control Unit, further reiterated that the successful use of the eLocust3 devices and cost-effective data collection procedures were the result of training and technical support for survey teams. Mr. Tedros added that in addition to being cost-effective, the devices allowed supervision and support from MoA headquarters to guide the survey teams during data collection.

The Migratory Pests and Desert Locust Unit has a forecasting and information office that is responsible for forecasting and providing early warnings. The officers collect and analyze a wide array of information, including climate, ecological situation, and habitat conditions within the summer and winter locust breeding areas.

Importantly, the Desert Locust Information and Forecasting Services (DLIS), located at the FAO-HQ in Rome, provides technical support, a monthly locust bulletin based on information collected from various countries, and updates and alerts to individual countries. The DLIS bulletins are vital since the early warnings they provide – to Eritrea and other threatened by desert locusts – can help safeguard livelihoods and national food security.