My Impression in Eritrea 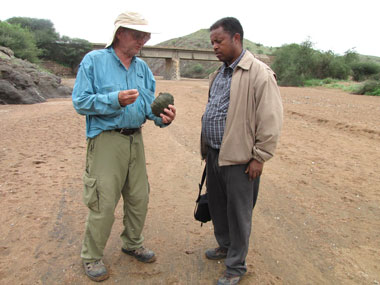 Dr. Theodore J.Papeenfuss, Research Scientist at the University of California

Editor’s note: Dr. Papeenfuss has been a research scientist at the University of California since 1980. He specializes in the study of reptiles and amphibians, and is especially interested in biodiversity and the conservation of these animals. He recently visited Eritrea on a working trip, and he provides a brief, yet detailed, account of his time in the country.

I have now been in Eritrea for almost three weeks. The scientific results of my visit to study species and amphibians and reptiles that occur in Eritrea has been extremely successful and in addition, I now know that most of the information that I saw in the internet while I was in California was not true. The people I have met are very happy. Before coming to Eritrea I had read on the internet that there were restrictions on international news, this is not true. My hotel in Asmara, many businesses and homes have satellite television. News services such as BBC and CNN news are available. The same is true in other hotels and homes according to the information from Mr. Futsum Hagos, Head of Wildlife conservation in the Ministry of Agriculture.

My hotel, the Sunshine Hotel, has BBC 24-hours news both in the room and lobby. The hotel continues to fill up every evening with happy and friendly Eritreans who come in to enjoy coffee or cold drinks and listen to live music. The Sunshine has excellent facilities of an international standard with modern rooms, a restaurant with an extensive menu, and 24-hours power along with a friendly and helpful staff. This is a great place to enjoy the famous beer. This beer is even found in Eritrean restaurants in California.

English is spoken by everyone who has been to high school or college; even in villages away from Asmara the people I met are very happy, friendly, and proud of their country. At every place I have been welcome.

We went to village Shunjubluk on Tuesday, village Dembe Zawl on Wednesday and village Geshnashim on Thursday. At each places we ask local villagers to take us to places where frogs, toads, and lizards were found. Our local guides were very helpful and we found a number of important species including some that had not been found since their discovery over 100 years ago. On Friday, January 29, we went to Dekemhare within the highlands of the Central Zone about 40 kilometers south to Asmara. This town is in an important agriculture region noted for fruit and vegetables.

The Wildlife department had contacted the Dekemhare Ministry of Agriculture office before we arrived. We were assigned one of the local employees who took us to rocky areas near the town where lizards were very common. The next morning we drove on to Segeneiti about 20 kilometers south to Dekemhare. Again, the wildlife department had contacted the agriculture office in advance and a person very familiar with the reptiles and amphibians was waiting to show us good places to fine these animals.
The head of the Segeneiti office phoned one of his assistant who has a small farm near the town. He waited for us at his farm and he showed us a pond on his farm where there was a large number of Eritrean clawed frogs (venous clevis). We found four tropo baitod with sardines and two hours were trapped many of these frogs. These species were first described scientifically from Segeneiti in 1904 by an Italian biologist. At the time Eritrea was an Italian colony.

The man who owned the farm wanted no money for working with us. He told me that I was his guest and as a guest I was a welcome visitor. When we left to return to Asmara late in the afternoon, he gave us four large cabbages as a gift. This is another example of the hospitality and kindness of the Eritrean to me as guest in their country.

Our next field trip was to Ghinda in the Northern Red Sea Zone. This is the area where the Eritrean side-necked turtle was first described in 1827. We stopped at a village near Ghinda and local farmer directed us to a stream where he had seen turtles. Within a short time two young men from the village found two turtles for us. We stayed at a small hotel in town and ate dinner at a local restaurant where I ate Injera for the first time. This is a delicious food that I recommend to all visitors of Eritrea. I will certainly ask for it when I visit an Eritrean restaurant in California.

My final trip was to Massawa. Here we found the gecko lizard were common at night around the lights of hotels and restaurants. The gecko species is of interest to me because it was also first described in 1872 by the same person who described the fresh water turtle species that we found at Ghindae.

We had an interesting visit to Green Island during our stay in Massawa. We were given general information about the marine resources of the red sea, by the Senior Marine Experts and Head of Marine Research, Mr. John. I was so interested to learn that the Red Sea of Eritrea has over 1000 species of fishes. Furthermore the Red Sea has a good population of dugong. On Green Island we found an interesting species of tiny gecko lizard. This may the first record of small geckos from the island. We saw interesting birds including the greater flamingo. I talked to three collage students from Asmara who were also visiting Green Island. They were very interested in our researches and were well aware of conserving wildlife in Eritrea. With the great understanding the young of Eritrea have and the commitment of government on conservation, the wildlife species of Eritrea are likely to have a bright future.

Before leaving Massawa, I had a chance to meet members of the local government of the Northern Red Sea Zone. They were interested in learning that the gecko lizards in Massawa were described scientifically from Eritrea 189 years ago. Our final stop in Massawa was at the museum where there is a display about Eritrea from the prehistoric time to the present. I was most impressed by the room that documents the liberation of Massawa during Operation Fenkel that took place 25 years ago this month.

One of the highlights of my trip was the field of a large male and female Eritrean Toad near Asmara. This toad has the scientific name of Sclerophrys Asmarae, named after Asmara. This beautiful animal was first discovered in Asmara in 1982. Eritrea should regard this animal as a national treasure because it is named after the capital city of Eritrea.

Small animals like frogs, toads, and lizards are an important part of the biodiversity and these animals should be respected and protected. The wildlife conservation staff of the state of Eritrea will soon prepare a list of these species. At least 10 were first described from Eritrea and are found no other place in the world.

When I leave Asmara on February 12, I will go with these favorable impressions of Eritrea. A country of citizens that I have met who have all shown me hospitality.

A secure country where I can walk around day or night in Asmara, and all the other towns that I have visited, knowing that I am completely safe.

Aware that there are no mass media restrictions. In every small town and village there are satellite dishes with more than 100 channels.

I had an extraordinary experience in the Expo compound, particularly at Hidmo Night Club. I really enjoyed the traditional dance and local drinks, Suwa and Mies. A woman put a bottle on her head and danced comfortable. I was really impressed.
People need to “come and see for yourself” before making impressions about Eritrea.

Certainly when I go back home, I will explain to my colleagues that Eritrea is an excellent country for biodiversity research. Lastly but not least I am extremely grateful with the staff of the Ministry of Agriculture who welcomed me warmly in the different towns. The effort of the wildlife conservation team made a great contribution for the success of my study and I owe them my appreciation. I hope we will work together in the future and make more findings. Eritrea is the core of the Horn Africa biodiversity hot spot area and beyond any doubt Eritrea will remain a center of attraction for researchers and tourists.

“Reading is my passion, publication is a business…”