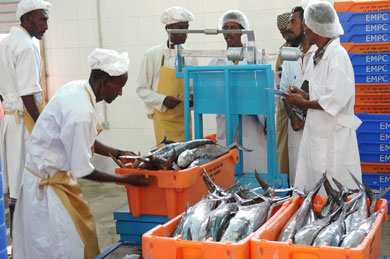 After a new era was signaled on May 24th of 1991, developmental endeavors began storming the country.A government body was established to look after and run the Eritrean maritime sector, while a large amount of research was soon published, describing, amongst other things, how Eritrea’s coasts could annually easily reel in 60 – 80,000 tons fish.

Quickly, practical steps were undertaken, and they have continued since. In 1994, Eritrea hauled in 2,646 tons of fish, significantly below its potential. After six years, the Ministry of Marine Resources and Fisheries noted this figure increased to 13,000 tons.

As noted within in the research by the College of Marine Sciences and Technology, 25,000 tons of fish taken in annually would help alleviate Eritrea’s food demand from agriculture. However, Eritrea’s exploiting of its maritime resources faces challenges in place. According to the government demographic reports, the Northern and Southern Red Sea regions’ population is approximately 302,000, with only approximately 1% of them engaged in the fishing sector.

The productive role of traditional fisheries has been quite low, particularly in comparison to the 1950s, when there were over 20,000 fisheries. Recent activities by the Ministry of Marine Resources hope to augment and expand the productive capacity of this potentially vital sector.

In 1993, sponsored by three bodies of the United Nations, the Government of Eritrea initiated the “Semhar-Assab Project.” As a result, one jetty, two ice producing industries, and two cooling rooms were constructed. Afterward, a gas distribution center and other similar facilities were constructed in Massawa and Assab. Support from the Government of Japan also was important, and there were increased successful activities from Assab to Berasole. Efforts to realize Eritrea’s considerable fishing potential also involved broad support from the government and several foreign companies. For example, directives, guidelines, and declarations helped the establishment of national fishing companies, including Keih Bahri, Amin, Thomas, Global Captain Feres, and Massawa. Some of these have accumulated great experience that can go some way towards strengthening the fishing sector.

Challenges for the fishing sector are varied. For example, training opportunities for traditional fisheries could be improved. As well, there is a lack of the technical or sophisticated means to exploit our marine treasures in balanced way.

Additionally, many local fishers complain of illegal fishing by neighboring countries. The Eritrea Red Sea, which is relatively pollution free and under-exploited, has been a magnet for large, modern trawlers from illegal fishers. In 2004 alone, 80 illegal fishing ships were corralled while in Eritrean waters. Undeniably, patrolling the vast Eritrean Red Sea is a considerable challenge, and the Eritrean Naval Forces should be provided with adequate security mechanisms (e.g. technology, equipment, etc.).

Ultimately, continued support and attention to the fishing sector is fundamental for Eritrea. IT can help promote food security, improve local livelihoods, and encourage the country’s export sector.