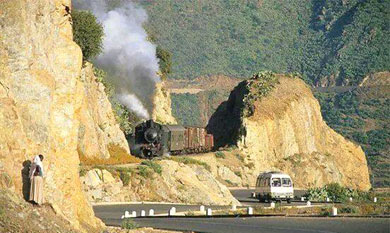 Ghindae, known as the “capital city of the Seminawi Keihbahri forests,” is located on the way to Massawa. It is a town of challenging landscapes for painters and topographers alike; different in summer and winter, it comprises rugged mountains in the surrounding areas, vast banks in the western bank, and moderate plains within the central part of the town. Artists with a good command of mixing their colorful compositions can often only hope to balance the diversity of this town.

Yet, this town is one of the most famous places in Eritrea for its appealing lifestyle. In Ghindae, the locals are fluent in several languages, and I came across people conversing amicably with each other in different languages within a long line of restaurants and cafes.

This rich diversity is possible and encouraged through Ghindae’s schools teaching in Saho, Tigre, Tigrigna, Arabic and English. “This town is formed by the pillars of diversity and the rocks of unity,” asserts the town administrator during our visit to one of the town’s famous restaurants.

As it was a Wednesday, I opted head to the marketplace. It was full of life and vibrancy. Sellers peddled an array of fruits and vegetables. Ghindae accommodates appreciative number of traders from the region and Asmara and it seems that economic activities of the town are encouraging. Beyond foodstuffs, a range of electronic equipment, cellphones, industrial assets, and other accessories are on display.

“Before independence, we had three fierce opponents: malaria, poverty, and war. After independence, however, the situation has been changed into positive terraces. And now, the devastating impacts of malaria have completely been eliminated. You know, during the era of the belligerent Ethiopian colonialists, malaria was the main killer over war,” states the local officer of the Ministry of Health in the sub-region. “In addition, Eritrean forces waged ruinous war in 1990. Thanks for the incomparable sacrifice of the heroes, peace has been restored and we are living peacefully,” he adds.

Not far from the central area, there is the herds market. Even though the market is as famous as those of Haikota and Mai Dima, the items on offer are enough to satiate local demands…and at a fair price! Herds from Gahtelay, Maihabar and Nefasit flow to this market and play a vital role in stabilizing market prices. “We know of the act of profiteering in some towns like Asmara…but here the reality is very different.

The herds market is drawing various customers,” said the economic development advisor of the town. “The differences between costs and prices are not too exaggerated, as those between the levels of the sea and altitude of the mountains, so to speak.”
Ghindae is similar to Dekemhare, characterized by rows of restaurants and tea homes. Its establishment between Asmara and Massawa is believed to be due to the aim of creating a rest spot for travelers.

Like most of the semi-lowlands, Ghindae’s residents can often be found strolling across its main streets in the afternoon hours. Café’s and tea shops air Eritrean films and comedies. Even though the town has a moderately furnished cinema, the majority of the youth opt diverting their ways to cafes and tea homes.

According to one resident, “the cinematic fascination of the residents of this town is like that of other citizens; people are interested in having nationally produced movies which are divergent in their profiles from the historical archives to social bonds.
Thanks to the local producers who saved us from carrying umbrellas because we believed it is raining in London, Istanbul, Washington or London.” The number of young people I saw in May Adkemom Club is testament to this fact…living and watching together.

The name of this club is taken from the perennial river of May Adkemom. With wide banks and frequented meanders, Ghindae’s farmers and the local agricultural sector depend on this river, while there is even a famous Tigre song in which the protagonist implores his lover to give him a glass of water from the river.

The old train station in Ferrovia reflects the struggle and success of thousands of immigrants who returned from Sudan after independence and are residing in Eastern part of the town. Moreover, ongoing architectural projects and buildings, undertaken in spite of the challenging mountainous landscape, are worth visiting.