The Importance of Music, Arts, and Culture: A Dispatch from the College of Arts and Social Sciences (CASS) 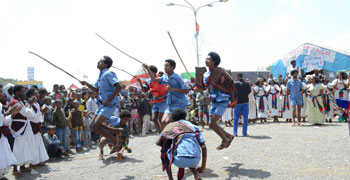 “Commando, commando…”
The catchy lyrics and smooth melody of a timeless tegadelti-era Tigrinya song reverberated through the crisp night air, firmly grabbing my attention as I leisurely slalomed my way around campus.

Long, slow strolls had become my standard after dinner practice at the College of Arts and Social Sciences (CASS), allowing me to comfortably collect and organize my assortment of random thoughts while surrounded by Adi Keih’s quiet, serene atmosphere, breathtaking landscape, and awe-inspiring, often clear night skies dotted with bright stars. Tonight, however, my ritual-like unhurried saunter was interrupted as my focus shifted to trying to learn the source of the song.

I gazed across to one of the school’s large lecture halls, located directly across from the students’ cafeteria. The lights were on and, belying the late hour, the room, generally used for freshman courses, was teeming with people and buzzing with activity. As I made my way closer, I could see that it was completely filled, with nary an open space in sight. With all the desks and seats occupied, students and various school staff had resorted to standing within the narrow aisles, sitting on one another’s’ laps, leaning on window sills and ledges, and congregating shoulder-to-shoulder at the doorway.

“What is going on?” I wondered. Itching to find out, I began manoeuvring my way – admittedly in a somewhat unceremonious, brusque fashion – through the large mass of people huddled at the entrance. “Sorry…sorry… excuse me…pardon me…sooo sorry..,” I sheepishly proffered while clambering forward and leaving a series of quizzical stares and perturbed frowns in my wake. Slightly stumbling as I finally reached the large metal doors, I dusted off my blazer, adjusted my shirt collar, and leaned my head inside.

A freshman student seated in the front row waved towards me and whispered, “Teacher!” I grinned as the student motioned for me to come inside, politely vacating their seat for me. Several other students nudged me forward, encouraging me to take up the offer. “Yekiniyelay,” I whispered quietly, thanking them as I settled down in my seat.

Quickly scanning the room, I noticed that all sets of eyes were intently glued to the front of the room, which had been transformed into a stage. Surrounding the makeshift stage was a large electric keyboard, straddled by a pair of imposing music speakers – the latter of which were no doubt responsible for catching my attention earlier in the evening. Several students, adorned in white traditional cultural garments and sporting black, rubber sandals – legendary shida (or congo) which were first made famous during Eritrea’s protracted liberation struggle – belted out a passionate rendition of a classic song.

Their performance, which drew an extended round of heartfelt, appreciative applause and enthusiastic, piercing, laudatory whistles, was only a small segment of a larger musical and arts exhibition, organized and carried out by members of the CASS student body and with the support of the campus’ PFDJ office. The exhibitions, free of cost and occurring every several weeks, generally include live performances of various songs in a variety of Eritrea’s numerous languages, hilarious comedy skits and unique stand-up acts, emotional poetry readings, creative rap freestyles, brief debates, and riveting short plays.

The events have truly become a hit amongst CASS students and faculty alike, arousing a great sense of anticipation and excitement across campus in the days leading up to performances. Mr. Romodan Ahmedin Mohammed, the representative of the PFDJ CASS Office and one of the exhibition’s organizers, would later proudly tell me that, “there are more volunteer performers than available time slots…we’re also planning on moving to a larger venue so that everyone can enjoy the shows in comfort.”
After a captivating, thoroughly entertaining several hours, the event’s tireless organizers thanked everyone for attending and reminded them to return in several weeks. Before exiting, I headed to one corner of the room where many of the evening’s stars were gathered, cracking jokes, slapping celebratory high-fives, and lapping in plaudits from fellow students. Making brief eye contact with several, I smiled, extended my hands, and congratulated them, roaring “B’tami tsibuk…K’ulukhum!” Smiling in reciprocation, they all shyly, yet politely, responded, “Thank you, teacher.”

Once back outside and with only my thoughts for company, my mind immediately drifted to thinking about what a wonderful evening I had just soaked in. While to some, the evening’s events could be relatively quickly dismissed as just college kids having fun, I reflected on how the events were actually representative of so much, much more.

Beyond simple entertainment and laughs, such events – involving the integration of music, arts, and education – offer an array of benefits for students. A large body of research suggests that arts and music within education help develop the whole brain, promote imagination, and present students with a vital creative outlet. “These events allow students to reveal their hidden talents,” stated Ms. Wehazit Tequabo, a fourth-year senior Political Science and International Relations student who frequently performs in the CASS exhibitions. “It allows individuals to express ideas or themselves in different ways…be it through music, art, drama, and so on,” she added.

Furthermore, a report by the Rand Corporation (2005) suggests that music and arts education can help connect students to the broader world, and ultimately improve community cohesion. Mr. Simon Weldemichael, representative of the PFDJ CASS Office and one of the organizers of the shows, described to me how the shows and the extensive preparation process “involve students [and others] closely interacting, cooperating, and engaging outside of a traditional classroom environment. Not only do the shows immensely enrich spirits and minds…they refine various skills and encourage cohesion, unity, and friendship amongst the campus community.”

Another significant dimension of the shows is their beneficial role in showcasing and disseminating Eritrean history and culture. Learning and understanding history is essential, both for students and the general population, particularly since it can promote good citizenship via a range of different mechanisms (Stearns 1998). “Many of the performances involve deep, significant historical lessons,” Mr. Romodan relayed, before adding, “Of course books and classes are important, but the shows offer another great way to share and learn our history.”

Notably, the maintenance of culture has often been a key focus for societies of the Global South, which have long struggled against racism, colonialism, and foreign appropriation. As Fanon, the famous Martinique-born author and revolutionary, describes in the Wretched of the Earth, “Colonial domination, because it is total and tends to over-simplify, very soon manages to disrupt in spectacular fashion the cultural life of a conquered people. This cultural obliteration is made possible by the negation of national reality, by new legal relations introduced by the occupying power, by the banishment of the natives and their customs to outlying districts by colonial society, by expropriation, and by the systematic enslaving of men and women.”

Critically, challenges to the maintenance or preservation of many cultures persist, particularly due to globalization, the result of which may be an unfortunate dissolving of cultural differences and diversity into a dull, colorless homogeneity, a process variously referred to as “homogenization,” “ A m e r i c a n i z a t i o n , ” “Westernization,” or “cultural imperialism.”

Capturing this sentiment, Mr. Nahom Fshatsion, a first-year student and passionate, devoted musician, notes how the shows “help us maintain our unique culture and learn our customs, our norms, and our traditions. It’s important to preserve our rich heritage.”

As I lay in bed that evening, recounting the countless highlights of the show, I also reflected on the broad significance of culture. Culture gives people a connection to social values, beliefs, religions and customs, and allows us to identify with others. It provides a people with a sense of belonging,

“I started to acquire more knowledge after I became a teacher…”