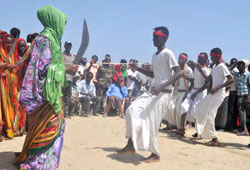 Students’ cultural and sports festival was conducted in Engel area of Gelalo Sub-zone.

Engel, 9 March 2016 –  Students’ cultural and sports festival was conducted in Engel area of Gelalo Sub-zone. The festival included cultural shows, diving, debating, handcraft and pottery contests as well as cultural pavilion among others.

Noting that the Students’ festival is held every year, the Mayor of Gelalo sub-zone, Mr. Ahmed Ali Bukalia, called for continuity with expanded and more diversified programmes in the future.

The director of the Ali Ghibeito School, Mr. Akhedir Omar Ardeyto, for his part, underlined the dividends that accrue from the exchange of experiences among students.

Engel is inhibited by over 500 inhabitants who make their living through fishing and herding activities.