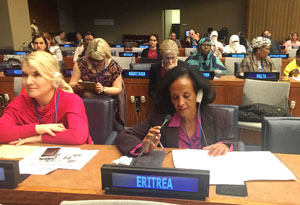 REMARKS OF MS. DEHAB SULIEMAN
NATIONAL UNION OF ERITREAN WOMEN
DURING
THE MINISTERIAL ROUND TABLE ON THE ELIMINATION OF VIOLENCE AGAINST WOMEN
THE 60TH SESSION OF THE COMMISSION ON THE STATUS OF WOMEN
15 MARCH 2016

Violence against women is a violation of human rights with serious long and short term consequences not only on victims but also for their families and society at large.

Let me take this opportunity to share with you Eritrea’s experience in the eradication of all forms of violence against women.
Eritrea as a signatory to the Convention on the Elimination of all Forms of Discrimination against Women and the Convention on the Right of the Child, has been making strides through relentless efforts to combat and eradicate violence against women and girls, and addressing the conditions that contribute to such violence.

The National Union of Eritrean Women, a grassroots organization with more than half a million membership and offices all over the county and outside has been at the forefront of this fight.

The most prominent form of violence against women in Eritrea is Female Genital Mutilation (FGM) and it is an area where awareness campaign and legal ban has contributed to its sharp decrease. Since 2007 FGM has been a criminal offence that is punishable by law in Eritrea. The campaign involved religious leaders and community leaders, including committees specifically created to safeguard in different villages. These committees would take the responsibility of preventing all newborns from experiencing FGM and reporting the status of all newborns, informing on how many were prevented from undergoing FGM and those that were not prevented, as well as creating alternative means of income for circumcision activity. As a result, the FGM that affected 95% of girls in 1995 today has dropped to 12% for ages 5 and under.

To address underage marriage, one of the first amendments that were made to the colonial transitional codes after independence in 1991 was amending the legal age of marriage from 15 to 18 years and prohibition of forced marriage for boys and girls. In cooperation with government institutions and civil societies, the National Union of Eritrean Women and international partners conducts extensive social and media campaigns. Building on the success of these programs in June of 2016 the NUEW plans to consolidate and coordinate its activity with the commission of the African Union. Empowerment and Development”  .
Rape and sexual harassment against women are considered immoral and intolerable acts in the Eritrean society. Rape is a crime and a serious public offence punishable with definite terms of imprisonment. In addition to the legal law, Rape is also comprehensively dealt with through the traditional customary law and it has serious negative social impacts for those found guilty of the crime.

Hence, the advocacy efforts of the NUEW has been geared towards combating rape as well as ensuring that the victims are empowered enough to report acts of rape, and those who commit  the crime are held accountable. The awareness campaigns also include building confidence, through workshops and other mechanisms for the law enforcement agencies to ensure implementation of laws on rape crimes. These campaigns have been critical in increasing the reported cases of rape and in holding the perpetuators of the crime responsible. In addition as far as future objectives, the National Union of Eritrean Women in collaboration with the government of Eritrea and partners has already started to implement the Strategic Objectives and Actions to Eliminate Violence against Women, as part of the National Gender Action Plan of 2015-2016.

In conclusion, from our experience the involvement of civil society organizations including people at the grassroots level is the way forward to bring tangible and measurable results.

I thank you, Madam Chair!