Statement by Ms. Tekea Tesfamichael President of the National Union of Eritrean Women 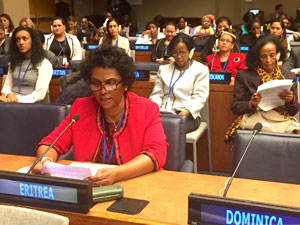 STATEMENT BY MS. TEKEA TESFAMICHAEL
PRESIDENT OF THE NATIONAL UNION OF ERITREAN WOMEN
DURING THE 60TH SESSION OF THE COMMISSION ON THE STATUS OF WOMEN

STATEMENT BY MS. TEKEA TESFAMICHAEL
PRESIDENT OF THE NATIONAL UNION OF ERITREAN WOMEN
DURING 60TH SESSION OF THE COMMISSION ON THE STATUS OF WOMEN

I would like to congratulate you, and through you the members of the bureau, on your elections to steer the work of this Session of the Commission on Status of Women.

Eritrea associates itself with the statements delivered by Thailand on behalf of G-77 and China; and Tanzania on behalf of African Group.

The year 2015 was significant in that the global community came together to conclude several key international agreements aimed at improving the lives of humanity, including the 2030 Sustainable Development Agenda which is the priority theme for our discussion in this session. The implementation of these transformative goals requires strengthening international partnership and fulfilling the commitments member states entered last September.

Eritrea is building a solid basis for sustainable development underpinned by social justice with priorities that include education, health, agriculture, industrialization, infrastructure, science and technology.

The National Union of Eritrean Women, a grassroots organization with more than 300 thousand members and offices inside and outside the country, in collaboration with the government and its international partners is actively engaged in implementing Agenda 2030.

Eritrea was among the few nations in Africa that have achieved the health related goals 4, 5 and 6. According to WHO’s report, Eritrea is declared Polio and Measles free, and vaccinations of children have reached nearly 100%. HIV prevalence, being 0.93% is the lowest in Africa. Similarly, Eritrea has made significant progress in expanding access and increase in school enrollment, combating violence against women and ensuring food security. This effort goes hand in hand with the ongoing efforts of ensuring sustained economic progress as well as consolidating good governance through strengthening human and institutional capacity of the civil service.

In the implementation of the SDGs, building on the gains it made on the MDGs, Eritrea fully embraces the notion of leaving no one behind. The government has already identified focal persons within public agencies and has established committees which are tasked with regularly reviewing and monitoring progress in the implementation of the most ambitious and transformative Sustainable Development Goals.

In the past two decades, the National Union of Eritrean Women along with the government and its international partners has championed the implementation of women related international commitments through broad advocacy at national and grassroots levels and mainstreaming gender sensitive policies and programs, including raising awareness on gender equality, creating political and social condition for economic empowerment of women, and combating all forms of violence against women.

The Union firmly believes that empowerment of women is an important pillar for a just, peaceful and prosperous nation. Hence, as Eritrea moves with the implementation of Agenda 2030, the Union will continue its advocacy for its full and timely implementation of all the targets, especially those related to the promotion of women’s equality and empowerment.

While hailing the progress made in many parts of the world towards gender equality and empowerment of women, we are still faced with the daunting task of sustaining and consolidating those gains as well as implementing new international commitments. Successful implementation of the Sustainable Development Goals needs paradigm shift. We cannot expect different results by doing the same thing year in and year out. We must address the conditions that affect the human rights of women globally such as conflicts, poverty, global income inequality and environmental degradation.

I thank you Mr. Chairman