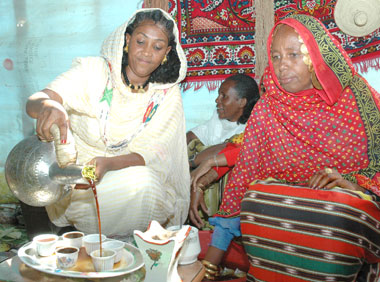 The scent of ground coffee and refreshing aroma of hissing espresso machines is a welcoming nature of the downtown streets of Asmara and other towns in Eritrea. Almost every café in most cities of the country, especially the capital Asmara, happens to own magnificent models of espresso machines and wonderful people who operate them. It is a common tradition in Asmara asking friends for a cup of espresso or macchiato; usually the one who asks takes the bill. But inviting someone for a coffee at your place is a profound tradition in every part of Eritrea.

Coffee is a traditional brew in most ethnic groups of Eritrea, each of which possesses variety of ways in preparing the coffee ceremony. Taking the Tigrinya culture for instance, coffee is prepared as a gesture of warm hospitality especially for guests who come a long way. However, drinking coffee in Eritrea is not just about pouring a concentrated coffee beverage into a cup or whatever sort of chinaware is used for that purpose.

Preparing coffee, or maybe we should call it a coffee ceremony in this case, would take more than an hour starting from the very beginning of roasting the coffee beans to serving the final brew of the coffee. For this reason, preparing coffee for someone in Eritrea would mean that you are going to have a long and nice chat with that person.

A wife often waits hours for her husband to arrive form work or any place he might have gone to, so that they could drink coffee together. In fact, it is most common at that moment that Eritrean couple gets to have quality time together, talk about things and catch-up with each other. Indeed, that would be the perfect moment for the couple to create a cozy atmosphere to talk their hearts out.

Traditionally, coffee in most parts of Eritrea is prepared by putting ground coffee in a coffee pot, usually made of clay. But first the coffee beans should be roasted and grinded. Then you mix the ground coffee with water, which of course the proportion differs determining the strength of the coffee. Later, heat is applied to the brew until the beverage tends to burst out of the top of the clay pot.

In most occasions, coffee in Eritrea is served three times for each guest. The first cup is obviously the best as the coffee-water proportion in the brew is normally coffee dominant and is by far very strong. Hence the following two or three rounds get diluent and weaker as the water takes over the proportion.

Aboy Goitom is an 80 year old man who worked for a little more than 55 years as a ‘Gaggia’, an old espresso machine, operator at one of Asmara’s oldest bars in the downtown streets. The old man said, “I know the machine like the back of my hand, besides we have more than half a century connection”, but he bluntly admitted that the coffee he has at home with his family is unparalleled. Aboy Goitom said, “The coffee in the cafes, like in most international ways is brewed by forcing very hot steaming water under high pressure through ground coffee. And the coffee is best served hot. That is normally called, as adopted from the Italian language, espresso.”

While explaining on how the coffee is prepared at home however, Aboy Goitom said, “ First my wife roasts the coffee until they

become oily brown, lesser than a dark brown if you want to have a tasty coffee, and makes me smell the smoldering coffee beans from the ‘Menkeshkesh’, a custom made metal pan especially made for roasting the coffee. Then the ground coffee powder is added to a pot, usually made of clay, Jebena, and is mixed with water. Then you put the Jebena on a burning coal to boil, where the aroma of boiling coffee smells from a distance. In the process, the coffee has to burst forth from the pot three times, and every time the women performing the ceremony put the coffee burst from the pot in another cup and return it to the pot after the pot cools off for some time, this is done three times, and after the coffee is boiled properly they put down the Jebena, for a couple of minutes and is ready to serve.”

“As far as I know in my own culture which is Tigrinia” ,Aboy Goitom said, “Along with the coffee ceremony it is very common to see popcorn served and Frankincense burned for good scent, and coffee is drunk in a small cup, Fenjal. Coffee is drunk in three rounds, four in some cases, but no additional beans are roasted, the women will put some water and coffee powder left for this purpose and make it boil for the second and the third rounds. The first round is called as “Awol”, the second “Kalayieti” and the third is “Bereka” if they serve the fourth, usually if you want to maintain the mood, they call it “Dereja”. Customarily one has to attend until the third round, and once all the three rounds are over, the guests bless the house of the host and the women who performed the ceremony.”

Normally, coffee ceremony in Eritrea is an integral part of the social and cultural life. An invitation to attend a coffee ceremony is considered an insignia of friendship or respect and is an excellent example of Eritrean hospitality, among others. Performing the ceremony is almost obligatory in the presence of guests from distant places, whatever time the guests may come. You should not be in a hurry though, because this special ceremony can take a few hours. So you have to sit back and enjoy, because it is most definitely one of the times you get your nerves relaxed.

For an ordinary or maybe a typical family in the Tigrinya ethnicity, it is the women’s duty to prepare the coffee and the men normally appreciate and comment on the quality of the brew. Nonetheless, in other ethnic groups in Eritrea, such as Tigre and Hedareb, the men, mostly herdsmen, carry all the gears they need, such as a metal “Jebena” and raw coffee beans so as to make coffee in every place they sit to take a rest and graze their herds.

Eritrea’s homage to coffee is sometimes elaborate, and always beautifully ceremonial. The tradition in preparing coffee has not changed its taste for centuries and occupies a center stage in the country’s value of culture, which portrays the true hospitable nature of Eritreans.

Asmara: A Playground of Futurist Architecture