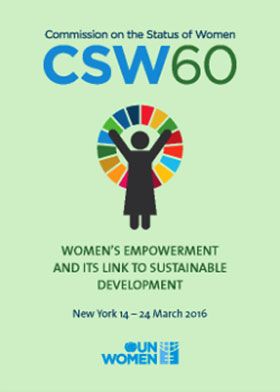 ERITREA SHARED ITS EXPERIENCE IN COMBATING GENDER BASED VIOLENCE

ERITREA SHARED ITS EXPERIENCE IN
COMBATING GENDER BASED VIOLENCE

The National Union of Eritrean Women and the Permanent Mission of Eritrea to the United Nations in partnership with the United Nations Country Team in Eritrea organized a side-event under the theme: “From Grassroots to National Action in Combating Gender Based Violence in Eritrea” on 22 March 2016 in New York. The side-event was held in the margins of the 60th Session of the Commission on the Status of Women aimed at sharing Eritrea’s experience, challenges and achievements in combating all forms of violence against women and girls.

Ambassador Girma Asmerom, Permanent Representative of Eritrea to the United Nations, in his opening remarks, stated that the exemplary contribution of Eritrean women in the struggle for independence and nation-building is a matter of historical fact that is documented by different researchers and partners. He also noted that some quarters with sinister motives against Eritrea deliberately fabricate baseless allegations such as “systematic rape is taking place in Eritrea”. Ambassador Girma asserted that “because rape is considered culturally immoral and intolerable by the people of Eritrea as well legally a criminal act, in Eritrea systematic rape has never taken place in the past and will never take place in the future”.

Ms. Tekea Tesfamichael, the President of the National Union of Eritrean Women, in her keynote address asserted that “equality and empowerment of women has constituted a decisive part of the nation building process and their role and contribution has been appreciated and recognized by all government institutions and society”. She also underlined that “the National Union of Eritrean Women, a grassroots organization with almost three-hundred thousand (300,000) membership and offices all over the country and outside is steadfastly serving as machinery for organizing, empowering and combating any form of violence against the Eritrean women.”  She stated “as a result, today Eritrean women get equal pay for equal work and have the legal right to own land and property”.

Ms. Senait Mehari, from National Union of Eritrean Women, Director General of Socioeconomic Services, presented in detail Eritrea’s experience in combating all forms of gender based violence, in particular FGM/C, rape and underage marriage. She also stated that the new Eritrean penal code that was published in 2015 includes definite terms of imprisonment for rape. Ms. Senait further elaborated on how the bottom up grassroots approach has contributed in the sharp reduction of violence against women in Eritrea.

Ms. Christine Umutoni who served in Eritrea for the last three years as UN Resident Coordinator/UN Humanitarian Coordinator and UNDP Resident Representative, presented concrete and detailed evidence based information on how the NUEW in cooperation with the UN Agencies and other partners is implementing the agenda of women empowerment and equality in Eritrea. She testified that “in Eritrea every penny is properly accounted. For example, a fund allocated to build one dam ends up being utilized for the construction of three dams.”

During the question and answer and interactive session delegates from Nigeria, Sudan Kenya and Liberia took the floor and expressed their support and appreciation to the NUEW for its remarkable activities in the empowerment and equality of the Eritrean women.

Farmers Association in She’eb: Campaigns on water and soil conservation