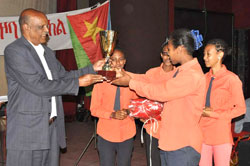 Thirteen sub-zones in Makel Region carried out contests in arts, education and sports to mark the Silver Jubilee of Independence Day.

Asmara, 30 March 2016 – Thirteen sub-zones in Makel Region carried out contests in arts, education and sports to mark the Silver Jubilee of Independence Day.

The competitions, held under the central banner of: “A quarter century of resistance and development”, started in January this year and were concluded on Saturday 26 March this week. The programmes included performances of revolutionary and patriotic songs, sports, debates, lectures as well as general knowledge competitions.

“Youth and Independence are two inseparable entities. As such, it is the responsibility of the current generation to maintain the freedom that was achieved through heavy sacrifices”, Mr. Samson Kifle, NUEYS Chairman in Zoba Makel underlined at the closing event.

Mr. Zerit Teweldebirhan, Head of Management at Zoba Makel Administration, stated that the Silver Jubilee Independence Anniversary is a momentous occasion in which citizens reflect on the heavy price paid to achieve liberation and the responsibility that this entails to realize the country’s national development objectives and aspirations.

Anniversary of the liberation of Nakfa Celebrated